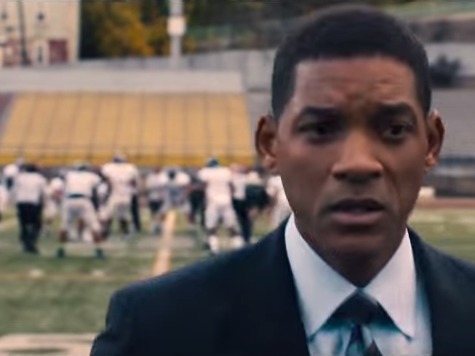 Plot:  Based on a true story, Concussion chronicles the story of forensic pathologist Dr. Bennet Omalu (Will Smith).  When former professional football player and Pittsburgh Steeler great Mike Webster (David Morse) dies homeless at the age of fifty, Omalu suspects brain damage may have caused Webster’s death, despite no visible evidence.  Omalu’s instinct leads him to discover a brain condition known as chronic traumatic encephalopathy (CTE) caused by repeated blows to the head prevalent in football players. When other former professional football players suffer the same fate as Webster, Omalu, along with the assistance of mentor Dr. Cyril Wecht (Albert Brooks) and former Steelers team doctor Julian Bates (Alec Baldwin), attempt to spread the dangers of CTE.  However, Omalu ends up running into an opponent that will stop at nothing to ignore and discredit his discovery–the National Football League.

Review:  Concussion is one of those movies that could have been so much more.  While it’s a serviceable film about an issue that’s become prevalent in football over the last decade or so, director Peter Landesman’s film vacillates between drama, thriller, and a man-against-the-system film.  In other words the film can’t quite decide what it is, and this creates a true lack of identity. Landesman’s direction comes across disjointed because of this fact, and while he obtains stalwart performances from his cast, Concussion never quite coalesces into a coherent narrative.

Where Concussion is most effective is when it focuses on the personal struggles of Omalu.  While an extremely intelligent and well-educated man, he’s also quirky, often talking to the people he autopsies which others find odd if not offensive.  Yet this comes from a good place as Omalu is extremely religious and recognizes that everyone, including Mike Webster, has family and friends they left behind.  It is these family and friends that are the most dramatically affected, left with the damage and devastation the effects of CTE cause.  His perplexity at why the NFL refuses to recognize the validity of his work shows a degree of idealism that’s refreshing.  The NFL sees dollar signs whereas Omalu sees the people.

Thankfully, Landesman has a very talented actor to portray Omalu in Will Smith.  Smith embodies Omalu to a T, despite utilizing a generic African accent.  The veteran actor does a fantastic job of bringing Omalu’s passion, intensity, and empathy to the big screen.   In several emotionally charged scenes, Smith conveys a sense of righteous indignation that swept me up in his singular minded goal to spread the truth about CTE.  Yet there are also several tender easy-going moments that demonstrate Omalu’s genial side. Smith carries this film and in another lily-white Academy Awards year, it’s truly a shame that Smith didn’t earn his third Oscar nomination.

While, Smith’s performance shines throughout Concussion, the supporting cast is hit and miss.  The chemistry was lacking between Smith and love interest Prema Mutiso (Gugu-Mbatha-Raw).  Mbatha-Raw’s character was too one-dimensional and just seemed there to offer support throughout Omalu’s trials and tribulations.  Luke Wilson was miscast and virtually non-existent as NFL Commissioner Roger Goodell as well. Other NFL representatives  such as Christopher Jones (Hill Harper) are stock cronies with little depth or personality.

Despite a few films here and there (Drive being one) I’ve never been a fan of Albert Brooks. His performance as Dr. Cyril Wecht was serviceable at best. He always seems to be playing…well…Albert Brooks.  While David Morse shines as the troubled Mike Webster, by necessity his role was limited. Webster’s life story would be a great movie unto itself.  If they ever make one, Morse would be great as an older Webster.  Of the supporting cast Alec Baldwin’s performance was the best.  He brought a depth and a true sense of regret and remorse to Dr. Julian Bates that was noble and determined.

The fundamental issue I had with Concussion was it missed a true opportunity to expose the duplicity and outright callousness of the NFL.  The NFL knew it had a concussion problem for decades and never warned their players.  I’m not sure how much influence the NFL had on this movie (I don’t want to get into conspiracy theory territory here) but it makes me wonder whether anyone associated with the film avoided putting the NFL in too negative a light.  Then again the film was more about Omalu than anything else.  Much like my earlier comment about Mike Webster, how the NFL covered up the concussion issue would make a fantastic film by itself. Hopefully one day that story makes it to the silver screen.

Despite its lofty aspirations, Concussion never quite reaches its full potential. However, Wil Smith’s strong performance makes this drama worth a late night viewing on cable.

One thought on “Movie Review: ‘Concussion’”