Why ‘Zootopia’ Is the Disney Movie for Everyone

Today we took the kids to see the new Disney movie Zootopia. It hadn’t really landed on our radar because, well, it didn’t have the superheroes that the kids tend to go for, but something drew me to it. We watched the trailers and something was tickling the back of brain. What was so familiar about it?

It looks like Robin Hood! I freak’n love that movie! Sure, the concept of anthropomorphic animals isn’t a new one in animated family movies m but the setting felt fresh and the characters were interesting and the animation looked splendid. So we went to see the movie with the kids in tow and we absolutely loved it. But you don’t need us to tell you that’s been well received, the numbers are astounding. Almost $700million in box office and 99% on Rotten Tomatoes is impressive for any studio. Disney is a stamp of quality for a reason. But we believe that Zootopia stands head and shoulders above most children’s movies for some very significant reasons.

Disney movies are primarily made for young girls. For the most part the heroes of the film are women coming from a range of cultures and ages, but women nonetheless. And most of them are motivated by the one thing: dreams. They dream of the day their prince will come, they dream of more than this provincial life, they dream of adventure, they just dream. Although there are notable exceptions to this rule the bulk of their major films work with the formula up to and including the Earth shattering success of Frozen. This is important because the Disney Princess brand pulls in billions of dollars annually. If you’re wondering why Disney forked out so much for The Avengers and Star Wars rights, it’s because they wanted an equivalent product for the boys.

Zootopia is a rare example of Disney not only transcending the gender barrier, but all barriers in the market and delivering some messages everyone should hear.

From the outset, Hopps seems like the archetypal Disney Princess character. She lives a fairy tale like existence and dreams of becoming something more. The most notable difference here is that Hopps lives in a modern, contemporary setting. Zootopolis, the city, is a metropolis populated by evolved animals but it has strong parallels with our society, essentially placing the characters in a world identifiable as ours. Rather than pining over a love interest, yearning for adventure or wanting to be a hero, Hopps wants to be a cop. It’s so simple yet so incredibly different for the company. Hopps is a cute (sorry, shouldn’t be calling bunnies cute), good natured, cheerful girl whose goal is to be a police officer.

She’s the Disney Princess who shows that you can set ambitious career goals and compete in what is usually considered a ‘man’s’ business without sacrificing your femininity. That’s rare in any film, never mind a Disney movie.

Of course the obvious comparison here is Fa Mulan, who bucked the gender rules of her society to fight in the army. There’s a significant difference though – Mulan disguised herself as a man to join the army and was only accepted as a man until she single-handedly defeated the Hun army. Hopps challenges the norm and succeeds as herself. She’s an awesome role model.

Her odd-couple partner in all this is Nick Wilder, a con-man fox who gets roped into helping Hopps uncover the mystery behind kidnappings across the city. Wilde sits somewhere between Robin Hood and Flynn Rider, except rather than living a fantasy life of adventure, he’s a realist. He manifests in the form of a city hustler. This is even more or a rarity for Disney – he’s an anti-hero. When he’s introduced he works for profit and to snub his nose at the authority and although it’s revealed that it was events in his past that sent him down this path he walks a fine line during the film, often doing the wrong thing for the right reason. He’s a complex character on a redemptive path who shows young viewers that they don’t need to be defined by what he’s done wrong, which is, sadly, a trap many children find themselves in.

Something he has learn himself.

So yes, great characters. But there’s a bigger message at work. There are few things as trite as a children’s movies preaching about acceptance. It’s been done to death and often grossly mishandled. The 80s and 90s were packed full of earnest ‘very special’ episodes of sitcoms and animated shows about racism, sexism, homophobia and even one amazing episode of Captain Planet that grossly misinformed my young self on the subject of AIDS.

Zootopia, like Nick Wilde, is a realist. The ideology behind the city of Zootopia is where every species can come together to live peacefully and all get along. When Hopps arrives in the big city (in a train sequence that made it feel like she was going to compete in the Hunger Games) she learns that things are not that simple. Tensions exist between animals of all kinds, with the division between former predators and prey being the most apparent. Carnivores make up only a small proportion of the population yet are looked on with a wary eye. Hopps is automatically suspicious of Wilde because he’s a fox, and although she is right of the money she learns that Wilde is playing to type because he’s been made to feel like he can’t be anything else. Hopps, as an adorable bunny, is automatically dismissed as a police officer in spite of having proven herself at the academy and finds herself fighting against the weight of an entire world of expectation to simply do her job.

Inclusion, rather than acceptance, becomes the big message of the day, and it’s handled extraordinarily well, but there’s another darker message worth talking about. The mystery of the film revolves around some predators being reported missing around Zootoplis, and it’s discovered that they have turned ‘savage’, reverting to their primitive animal role. Without spoiling too much, it is revealed that a person in authority has been causing these ‘outbreaks’ to happen in order to manipulate society through fear. By creating the sense that this small minority could potentially wreak mass havoc, fear spreads through the city. Played on by the media and the government, those in authority are able to push their own agendas.

Holy cow! What a brilliant concept for Disney to address in the modern world! In a world of highly publicised terror attacks and mass shootings, where we have people like Donald Trump playing up people’s fears for their own gain, this is an important message. It’s showing children that they can be critical thinkers, that if someone in authority wants them to be scared they should absolutely consider why. It shows that what you see in the media is a surface look at the issues and how much those issues can come between people if they allow it. The next time a child asks about politician or candidate who is talking about Muslims or Mexicans or China and trying to rally the people against these groups for the fear that ‘some of them’ might turn bad, take them to see Zootopia and help them join the dots.

I love Zootopia for addressing these issue as much as I love Inside Out for addressing childhood depression and mental illness. This are bold steps for a highly influential company and it can go a long way to helping children who might be feeling a bit lost in the world. These recent films open the door for discussion into topics that are never addressed in children’s films with this skill.

And, like Inside Out, there’s so many other reasons to love the movie. It’s brilliantly written and directed, the voice talent do an incredible job and it’s downright funny. It’s packed with both slapstick jokes and some very subtle in jokes. My favourite small gag involved the thieving weasel named Duke Weaselton. At one point Hopps mispronounces his name ‘Weselton’, angering the weasel – a reference to Frozen character Duke of Weselton anger at people calling his kingdom ‘Weaselton’. The real kicker? Both character are voiced by Alan Tudyk! I was the only one who laughed. It’s also an incredible example of word building. It sounds simple on paper – a world inhabited by evolved mammals. But they have put so much imagination and detail in this fantasy world and all we want to do is explore it more. 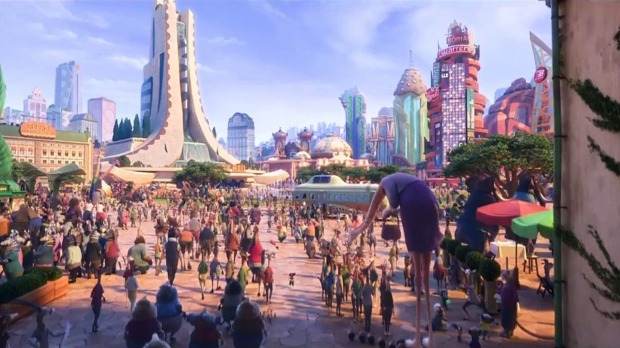 Everyone should watch Zootopia. It’s a super fun movie with some powerful lessons to pick up on. Also, it’s funny.

← Take Time to Stop and Smell the Geekiness
Cheap Game Tuesday: ‘War of the Monsters’ →

2 thoughts on “Why ‘Zootopia’ Is the Disney Movie for Everyone”