The first day of Perth’s Oz Comic-Con is done, and we have our next interview ready for you! Rachel Miner, demonic on Supernatural, manipulative in Californication and generally awesome joined us for a chat about playing evil, what she’s scared off and our new plan to get married!

G-Funk: We’re at Oz Comic-Con in Perth and we’re talking to – tell me if I get it wrong – Rachel Miner.

Rachel Miner: That is correct.

RM: Thanks, I’m really happy to be here.

G: Most people will know you for Supernatural at this particular event.

RM: That tends to be the people who come to the convention, they come for that.

G: I’ve been doing a bit of research, starting with Supernatural and looking back over some of your old roles. Do you always play evil people?

RM: (Laughs) Pretty much! It’s so funny, someone else was just pointing that out to me.

G: Have you thought about that before?

RM: I have, I’ve noticed a pattern and strangely I’ve been to two auditions where I’ve auditioned for the ‘good girl’ and very rarely do I ever get that part! Usually they say ‘that was great, we have a different part for you’, and they give me the evil girl.

G: We have demon for you over here!

G: Have you been typecast?

G: We just met and you seem so nice already!

RM: Thank you! I didn’t kill anyone the whole time!

G: There was that waiter, but he had it coming. With Supernatural, you took over the role from another performer…

G: …that’s the character of Meg the demon. Was it challenging stepping into someone’s boots?

As Meg in ‘Supernatural’

RM: I was lucky because I actually hadn’t seen the show before I got it. I think I would have been really nervous about living up to what she’d done because she’s so good. I went back and watched it after and I loved her work and I’ve since met her and we’ve become friends. I just love her. I think we lucked out that we’re similar enough, because we got on right away, and the character is so well written that we took it to a similar place.

G: Like you, I came here not knowing much about Supernatural, but I’ve got a lot of film students who are really into it. It’s got a real cult following. I asked them if there’s anything I should ask…

G: (Pulls out pages of questions) I don’t think we’re getting through all of these…if you don’t mind, I promised them.

RM: Yes, please, absolutely. One of the things about this show, one of the reasons people, a lot of intelligent and film savvy people, fall in love with it is because it’s actually a really smart show and it has a sense of humour about it. There’s a kind of ‘wink, wink’ about it.

G: Picking up from where Buffy (The Vampire Slayer) left off was the right time, right place for the show.

RM: I agree. Anyway, let’s run through this.

G: I’ll pick out a few…was there a creature in Supernatural who scared you?

RM: I’m not easily scared, generally, so I haven’t had that. I think, from horror films and that, the thing that scared me the most was Arachnophobia, it’s the spiders. There was a bug episode but I don’t think there was a spider episode. If they had that I might’ve been creeped out.

G: You know that you’re in Australia, right?

RM: I do realise that!

G: We have spiders!

RM: Yes, I will survive. Hopefully there won’t be too many of them at the convention.

G: If they’ve seen your movies, they’re going to be scared of you!

RM: Yes, he is. He’s also very smart. That’s a what a lot of people don’t realise, that everyone I met on that show was really intelligent and well read. I’m someone who’s a big book nerd so the things that please me…hair goes over my head. (Laughs)

G: It sounds as if it must have been a really fun show to be on. I mean, if they didn’t like each other they wouldn’t have done it for…eleven years now?

RM: You’re absolutely right, and I think that’s a big part of what comes across. It’s like a family there, and they’re truly decent, nice people. They work their butts off and yet always have a levity to the working environment.

G: Looking at some of your other work, you’ve got some really confrontational roles and films like Californication and Bully. Is that something that you deliberately sought out as a performer?

RM: No, it’s funny. I don’t think that’s necessarily in my nature or what I was looking for. I think there’s something to the fact that those kinds of characters and those kinds of shows, they activate your imagination even more. As an actor it’s always a fun challenge to get inside the head of someone who’s really out there. Maybe that’s what sparked it for me, what drew me to those roles.

G: Bully in particular caused a lot of discussion and…a lot of people of people really resisted the film. Did you think it was hard done by in that regard?

RM: No, I think that was correct. I think the reaction to that should be certain amount of disgust. It’s a true story and a horrific story so I don’t think it should be something that everyone should love. You should have a very deep, visceral reaction. I think that’s the role it should play, to get us thinking and realising that these things occur. 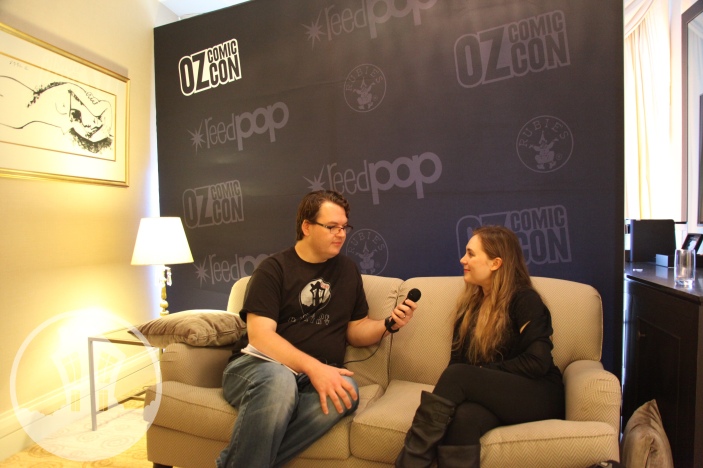 G: It’s walking a very fine line when presenting something that really happened in a film like that. Did you do a lot of research into the people involved and the case?

RM: I did do a lot of research. I remember at the time one thing that scared me about was making it in any way attractive. I didn’t want this to be a film that glorified, or drew people into this world and make it look prettier than it was. because it was not a pretty story. That was my first gut reaction to reading it. I did do some research, but on the other hand, it is a movie. The real girl, she always claims that she hadn’t done it. If she were to describe what happened it would be very different. I did play the character as she was written in the film as opposed to trying to interpret in the way she would want it interpreted.

G: Roger Ebert championed it for that reason. He said is was murder, but not as entertainment, which, when you think about it, a weird system that films fall into.

G: I read a weird news story about you this week.

G: Did you get married two days ago?

RM: NO! (laughs) Who did I get married to in the news story?!

G: I don’t know! Apparently it was a secret ceremony on Wednesday.

G: I read it yesterday and I thought that can’t be true, she’s coming to Perth this week!

G: Initially I saw a story, that there was a hoax that you had died a few weeks ago, and then there was a wedding…

RM: I didn’t know about that hoax but I have heard of hoaxes in the past where people wanted to know if I was still alive, and yes, I am! It’s fascinating.

G: So we can say right now…

RM: I am alive and not married.

G: Single, and in Perth…so bizarre.

RM: It’s so strange. We should start one.

G: What would we do?

G: Here in Perth? Just let me know whatever you want it to be, and I’ll put it in the story.

RM: Ok. Do you want to get married?

RM: That’s a more interesting story! I’ll marry you both!

G: I’ll tell her. Are you good with kids, because ours are right rascals.

RM: I love kids, how old are your kids?

RM: That’s beautiful. I taught some girls for a while even though I play a murdering psychopath.

G: Mine haven’t seen your films yet. They’re more Doc McStuffins. Everyone knows you for Supernatural, so for a last question, are there any roles or projects you like people to be more aware of?

RM: No, I mean, I don’t try to get too invested in that. Honestly when I make something I let it go free and I’m fascinated by what takes and what doesn’t. To me, it’s lovely meeting people and I don’t take any of it too seriously, if you can tell. If it touches someone then I feel honoured that I got to be a part of it.

G: So good to hear that kind of attitude. We’re getting signals behind your back to wrap it up, so thank you so much for talking to us and we hope that you enjoy your time on the convention!

RM: Thank you so much!