Hello readers of Geekery! I’ve decided to start a new series, one that will be about something I love: cryptids! A cryptid is a creature that may or may not exist, with suggestions but no scientific proof. You’ve no doubt heard of a ton of them and for this series I will featuring one at a time with a breakdown on what is it and how to find out more. First up is my personal favorite (I am a Jersey girl after all):

The Jersey Devil is a cryptid from southern New Jersey that is said to resemble a smorgasbord of different creatures. Descriptions of the Devil vary but there are many that describe the same exact, odd-looking creature. This most common description says the Devil is kangaroo-like with a head similar to a horse or goat, leathery wings like a bat, a furry body, horns and cloven feet. Some sightings claim the creature had a forked tail as well.

The origin of the Jersey Devil also has many different versions. Most of these include Mother Leeds. In one of the most common varieties of the tale, Mother Leeds had twelve children. Upon finding out she was going to have a 13th she cursed the child and said “Let it be a devil!” Thus, the Jersey Devil was born and flew off into the night, forever to terrify the people of New Jersey.

Where has it been sighted?

The Jersey Devil is most popularly spotted throughout Southern New Jersey, mostly in an area known as The Pine Barrens. The Pine Barrens (also known as The Pinelands or just The Pines) is a unique ecosystem that is combination forest and coastal plain. Many parts of the Barrens remain untouched, or at least uninhabited, since the soil isn’t good for farming. This is the perfect environment for a creature to live without being discovered by scientists. Over its many years of traversing the East Coast, the Devil has been sighted all over the state and even in some surrounding states.

When have people seen it?

The Jersey Devil is the US’s oldest cryptid, going back to Native American folklore. Records of residents terrified of the creature go back to 1740. Below are some of the most significant dates and sightings of The Jersey Devil:

1800: Commodore Stephen Decatur visits Hanover Mill Works in the Barrens to inspect cannonballs. The story says that he shot a cannonball at a mysterious flying creature but did not bring it down.

1820: Joseph Bonaparte, brother of Napolean, was living in Bordentown, NJ and spotted the creature while hunting.

1840: The Jersey Devil is blamed for a rash of livestock deaths in the area and people lose their shit.

1909: From January 16 through 23, panic overtook the people of New Jersey as an epidemic of Jersey Devil sightings took place. Newspapers covered the story intensely. Sightings were reported all over the state and even in PA, DE, and MD. Unidentifiable footprints were found in yards and on roofs, leading to evidence of a winged creature that was terrorizing the Delaware region. The panic was so great that schools closed and people refused to leave their homes.

bloodcurdling screams flood in from people in Mays Landing. Many attribute them to the Devil.

1993: A forest ranger spots the Jersey Devil along the Mullica River in the Pine Barrens. His description mostly matches what other people have long said they have seen out in the Pines.

2015: Dave Black, of Little Egg Harbor township shares an alleged photo (left) of his encounter with the creature near a golf course in Galloway.

What could it be?

There are many theories as to what the Jersey Devil is. Some say it really is a mismatched creature from Hell that immortally stalks the Pine Barrens. More realistic explanations say that it was a foreign or unknown creature such as a large Sandhill Crane that has since been eradicated from the area. There’s no conclusive evidence to prove any theories, however, so this creature remains a mystery. 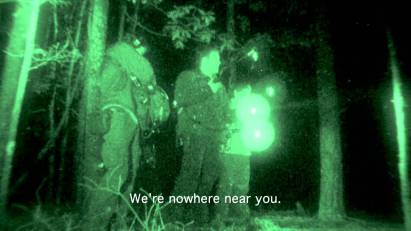 So what say you dear readers? Is the Jersey Devil a supernatural demon-spawn prowling the Pine Barrens? Or is it a case of mistaken identity and folklore passed down through generations?