Synopsis:  Littlefinger confronts Sansa as she plots with Jon and Ser Davos on how to take back the North.  Arya continues her work with the Faceless Men of Bravos and is given a new assignment.  Bran’s power expands as he continues his training with the Three-eyed Raven.  In the Iron Islands Yara Greyjoy makes a claim to the Seastone Chair with support from Theon. However her Uncle Euron has other ideas.  Dany makes preparations to leave Vaes Dothrak and gives a final command to Ser Jorah.  The meaning of the word Hodor is finally revealed. 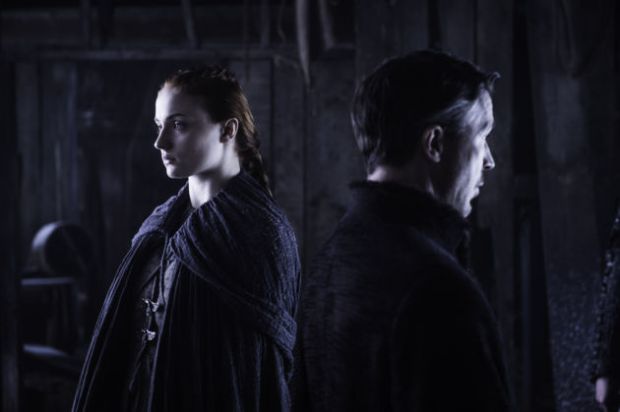 I’ve mentioned in the past Sansa’s tentativeness has been replaced with steel.  I was wrong.  It’s been replaced by VALYRIAN steel.  The Sansa of two seasons ago never would have been able to face down Littlefinger like she did.  There’s a menace in her words when she asks Littlefinger “Do you know what he did to me?!”  Moreover did Lord Baelish know what Ramsay would do to her? He had to know Ramsay was a whackjob.  While Littlefinger professes his ignorance, it’s clear Sansa sees through his lies.  Despite the horrors she’s been though it’s clear that Sansa is owning her past.  She’s turning her pain into rage, focus, and strength.  And the knowledge that Sansa’s Uncle Brynden Tully has retaken Riverrun is not lost on her.  His army may make the difference in the battle to come.

It’s slightly odd that she would take Littlefinger’s word for it when she just said that she doesn’t believe a word that comes out of his mouth.  At this point the bottom line though is that she needs men if she wants to take back the North.  Sansa can’t afford to not take the chance that the Blackfish has an army.  Yet Baelish couldn’t help drop that backhanded comment about Jon only being her half-brother.  The guy doesn’t have an off button.  He’s always trying to sow discord.  I’ve no doubt that when the battle actually comes he’s going to wait to see which way the wind blows before fully committing the Vale to one side or the other.  However, there’s no doubt that he’s a survivor.  I don’t necessarily believe as some have theorized, that his ultimate goal is to sit the Iron Throne.  Pull the strings?  Definitely.  But the throne?  No.

Sansa’s also a survivor (in more ways than one) and uses Littlefinger’s knowledge to her advantage.  Showing true Stark leadership, Sansa sends Brienne, Jon, and Tormund (much to Brienne’s discomfort) to parley with her Uncle Brynden.  How hilarious was that creepy look Tormund gave Brienne by the way?  He’s obviously smitten even if the feeling is (currently) unrequited.  Yet Sansa lies to Jon about where she got the information from.  Does she not trust Jon?  It calls into question her giving Jon Stark a cloak similar to Ned’s, emboldened with the sigils of House Stark. Is she trying to bolster his trust?  Seems manipulative.  She’s starting to play the game and play it well.  Regardless the die has been cast. 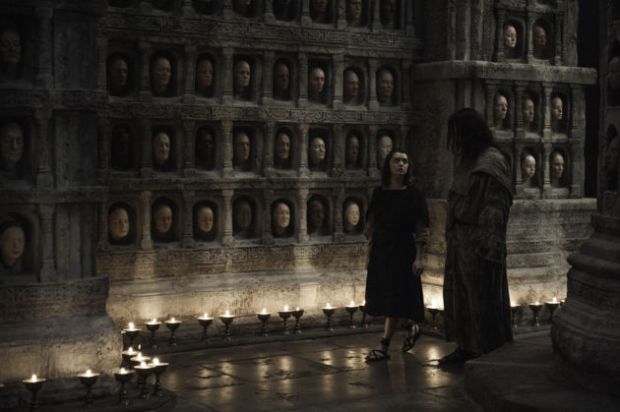 It’s nice to see this week that Arya’s been given something to do other than get the crap kicked out of her, if albeit a small task.  Her character’s been somewhat wasted this year.  Amidst her training to become Donatello from Teenage Mutant Ninja Turtles, Jaquen H’ghar offers a new assassination mission for Arya.  An actress must be given the gift of death.  Arya smartly figures out that it’s a Black Swan situation, as a younger actress is jealous of an older more established actress’s stage time.  I think the mission was also a test of Arya’s emotions and allegiances, as the play she attends is a parody play involving her father and the recent events in Westeros.  I have a gut feeling that this is just a rehearsal for something bigger.*  (By the way could have done without the dong shot from the actor with genital warts but hey there were boobs too so…)

In season six we’ve finally seen some payoff when it comes to characters’ back story and relevance to future events.  (It’s probably not a coincidence that the director of this episode was Jack Bender, a prominent director on the television show LOST.)  My mind was completely blown with the revelation that the Children of the Forest were actually the ones who created the White Walkers, from men.  It’s ironic that Mankind’s greatest enemy (the White Walkers) were originally men created by their enemy at the time (the Children of the Forest).  The scene also explains why Dragon Glass kills the Others.  The concept that Mankind is its own worst enemy is an old one but always from a psychological standpoint not a physical one.  It’s a great twist on an old idea. 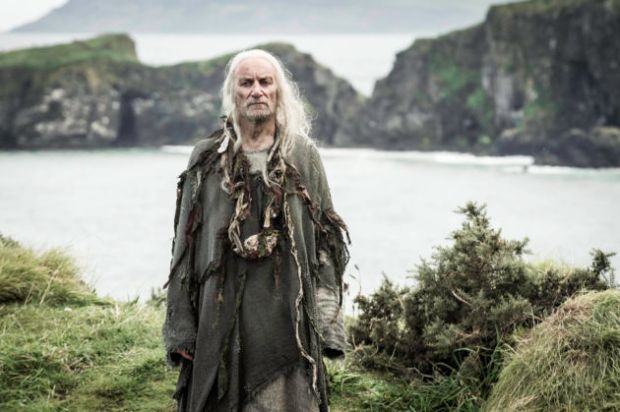 As engaging as Bran’s storyline has become, the Iron Islands plot is growing very tiresome.  Yara’s claim to the Seastone Chair was pretty uninspired (it was essentially “Yay go team Ironborn!  What is dead may never die and all that shit!”) despite Theon’s enthusiastic response.  Euron Greyjoy eagerly steps in and makes a claim.  I was a little surprised that he openly admits that he killed Balon.  Guess kinslaying doesn’t mean as much on the Iron Islands as it does on the mainland.  If I could step into fanboy book mode for a second though, I really think they are wasting Euron Greyjoy’s character.  He’s portrayed much better in the books and the omission of the Hellhorn was a poor choice.  Having said that, Euron’s fleet may be the way that Dany gets her ships, and her opportunity to return to Westeros.  Good to see that Yara and Theon foresaw what was coming and got the Hell out of Dodge.  I’m wondering if we see them at all the rest of the season.

I don’t know how I feel about Jorah and Dany’s goodbye.  Obviously it was emotional as Ser Jorah’s been with her from the beginning.  However, was her command to Jorah to find a cure for Greyscale sincere or was she just giving a him reason to live for now?  We haven’t seen the last of Jorah though.  I’m positive of that.

While many have complained about Tyrion’s story this year regarding his dealings with Varys in Meereen, I disagree.  Diplomacy and politics have been Tyrion’s bread and butter (or wine and whores if you will) for the entire series.  He’s getting a chance to shine at it for the first time since he was the Hand of the King in season two.  Tyrion is always thinking two steps ahead and he knows that it isn’t just enough for the people of Meereen to know they’ve been liberated.  They need to know Dany’s working to keep the peace.  That’s why Tyrion’s plan to bring in the ravishing new Red Priestess Kinvara is a bold and logical move.  Varys is obviously a skeptic when it comes to her powers, and rightly so given what happened in Westeros.  However, I think when Kinvara revealed her knowledge of Varys’s past, he saw the light so to speak.  Seriously, I’ve never seen Varys so shaken up before.  Dude up to this point has been unflappable.

Sigh.  Now we come to the most heartbreaking part of this review.  Bran.  Bran, Bran, Bran.  Why couldn’t you just leave well enough alone?  Bran demonstrates a marked lack of patience by going out on his own without the assistance of the Three-Eyed Raven.  Unfortunately he encounters the Night King, White Walkers, and an army of wights.  The Night King sees Bran and brands him, leading the group right to their sanctuary.  And that’s when shit goes south.  In the aftermath of Bran’s horrible decision, a violent attack ensues by an army of the dead (an amazing scene by the way) and Bran is thrust into the role of the Three-Eyed Raven much sooner than was intended.  Bran’s choice results in deadly consequences as both the Three-Eyed Raven and Summer are slain.  (Yet ANOTHER direwolf bites the dust!)  But that’s not the worst of it.

Game of Thrones has proven time and again that even the littlest things can mean something. We’ve known since season one that all Hodor can say is “Hodor,” but we never knew why.

In one of the last sojourns of the Three-Eyed Raven and Bran, something amazing and significant happens.  While the fighting in the cave occurs, Meera is able to penetrate into Bran’s consciousness and enable him to warg into Hodor. Hodor then gets them out the back door.  As Meera drags Bran away she implores Hodor to “Hold the door.”

Turns out Meera’s pleas reverberate back in time while Bran is observing the past.  It causes Hodor to have a seizure and devolve into the Hodor we’ve all come to know and love.  The action was so powerful, a command to hold the door so Bran and Meera could escape so compelling, that it rules Hodor’s life until his dying moment.  Never thought I’d see time travel play a role in Game of Thrones but it calls into question, was Hodor always meant to become Hodor in the way he did? Was it destiny?  It’s a causal loop situation the likes of which only Star Trek could explain.

At this point Meera and Bran are probably going to head for Castle Black.  I wouldn’t be surprised if Bran comes into contact with Jon and Jon’s true parentage is finally revealed.

It’s hard to believe we’ve reached the halfway point of the season, but that’s where we find ourselves.  Let’s hope the second half of season six is just as compelling as the first.

*I’ve been trying to figure out what the ultimate end game is for Arya.  I think this past episode gives us a clue.  This mission wasn’t just a test.  It was a rehearsal.  The House of Black and White and the Faceless Men are in Bravos.  So is the Iron Bank.  The Seven Kingdoms owe the Iron Bank an immense debt.  I wouldn’t be shocked if the Iron Bank hires the Faceless Men and consequently Arya to assassinate Tommen, Cersei, and Jamie in order to put a new person on the Iron Throne.  Someone who will actually pay them back.