Here’s a funky title that turned up at Gen-Con recently…which is on the other side of the planet from us, but fortunately we got a backer copy from the Kickstarter campaign. What caught our attention were two things. You are in charge of a television network and have to pick the best shows to bring in viewers, a fun topic that fits into our geeky interests. Secondly, the designer’s company is called ‘Formal Ferret’ and their logo is a ferret wearing a tiny top hat and a boy tie. That shit matters people.

We’ve had the chance to unbox it and play a couple of rounds, all of which I won, so this already gets a ringing endorsement. Up to five players take on a fictional television network with such shows as ‘Get to Know Your Colon’ and ‘What’s in My Pocket?’ along with an advertisement and a piss-poor celebrity to start them out. The shows you get at the beginning don’t bring in any viewers, and with the goal of the game being to have the most viewers this is a problem. Over the course of 5 seasons you have to decide how best to use your resources to achieve this goal.

Money is the primary resource you use to obtain new shows and celebrities, with your coffers being refilled by collecting and using ads. Developing a new show and adding it to your line-up is the most efficient way to increase your number of viewers, but each show has their own set of criteria. This includes an initial cost, ongoing maintenance costs, the inclusion of a star and/or advertisements. Stars cost money to obtain, but bring in more viewers while advertisements bring in money. The trick to the game is that there is a very limited number of each resource made available each season, so choosing when to invest in a show, star or ad is absolutely essential to success. In a unique twist there is no limit to the number of turns you can take during a season. Whenever a player has made all the moves they can or want they can ‘drop and budget’, with the first ones to do so getting the biggest cash rewards for going into the next season, making the option to stay in the round or drop out a strategic move. If you are the last one left in the season you can perform as many actions as you want before cashing in, including scooping up any and all free resources available. 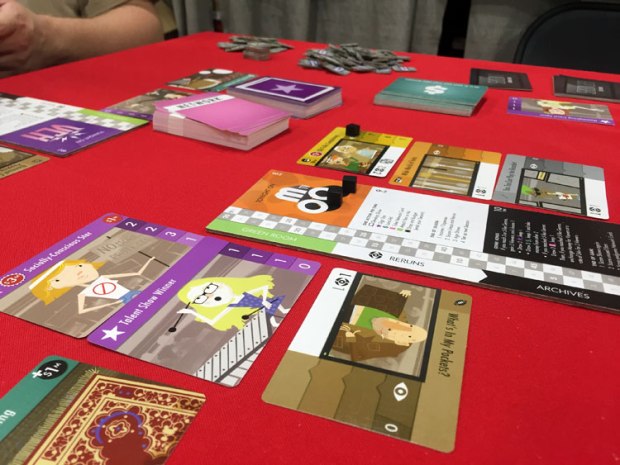 Resource placement games can be complex affairs and are often difficult for a new player to jump right into, as you rarely get the opportunity to try every option in a single play through. ‘The Networks’, on the other hand, is a tightly crafted strategy game that proved immensely easy for new players to learn and be competitive from the get go. There’s enough random elements to prevent more experienced played from being able to predict the upcoming rounds, but not so many that it feels left to chance. With the resources in high demand and likely to be grabbed by a competitor before you get the chance, you’ll need to re-think your strategy on the fly from time to time.

The goofy artwork complements the simple design well and although the play board being three seperate parts isn’t ideal, it makes it easy to take in all the important information at a glance. Having all the shows reference existing shows is a nice touch and we had a good time working out what they all were based on, but this could lead to the show feeling aged before long. Perhaps in the next expansion they could include some classic shows to give it a more timeless appeal. That said, ‘Dexterous’ did win me the last game. 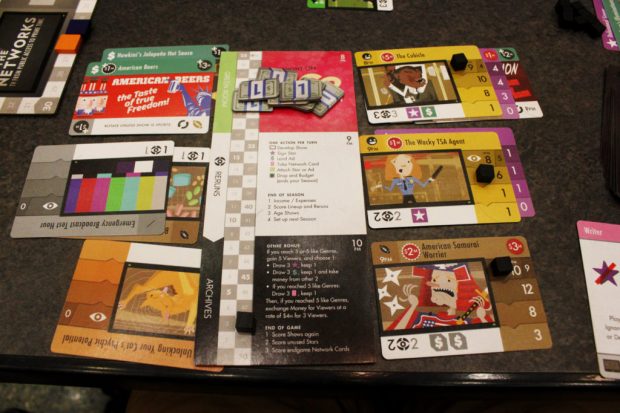 There are different sets of rules for one and two player games, but we’ve only played it with 5 players so we can’t comment on them.

It’s an easy game to learn and it’s fun to play. Can’t offer a better recommendation than that.