Cheap Game Tuesday: ‘Reigns’ – An iOS Game Worth a Damn

Cast your mind back to the simple days of the iPhone 3 and 4…when everything was new and shiny and smart phones were becoming the norm…when indie developers were using this new platform and touchscreen control scheme to create new and innovative games…wasn’t there a real sense of potential? The games that came out then remain the biggest and most popular games on the system. Angry Birds, Fruit Ninja, Where’s the Water? and Cut the Rope remain some of the best selling games on smartphones. The reason why innovation and big hits like these have dried up in recent times is to do with money. As soon as companies found out that slapping Kate Upton’s boobs on a game and preying on addictive behaviour you can make people empty their pockets into a game that produces no satisfaction or, essentially, fun.

It’s a dark, bleak time for phone based games. 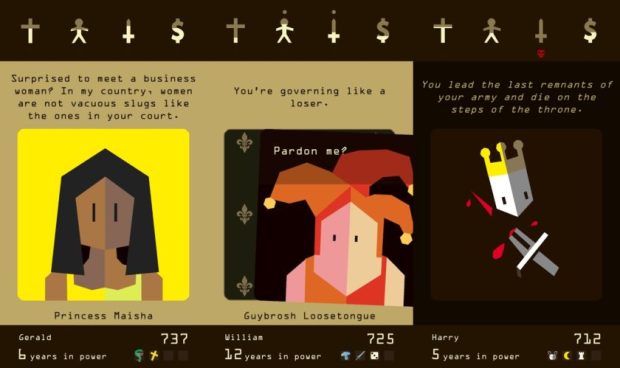 This little gem will only set you back a few bucks and it’s unique, fun and weirdly funny. You begin as the king of a Ye Olde English kingdom and are presented with a deck of cards. Each cut will present you with a simple situation and two choices. Make you choice and you will reap the immediate and long effects, mostly on the four aspects of the kingdom. The church, the army, the people and the treasury have to be kept balanced. Agree to build more schools for the church and the church and people will be happy, but the treasury will take a hit. If any one aspect becomes completed depleted OR full you will be overthrown and die. Also if you lose a fight, get lost in the dungeon or pick one of the many poor choices ahead of you will die. This isn’t the end of the game though – you will immediately take control of the next king and face the next choice.

Throughout the game you will find new outcomes and combinations of choices that will add new cards to your deck. If you find the weird prophet, the witch, the princess or other characters a new set of decisions will be added, leading to more options. 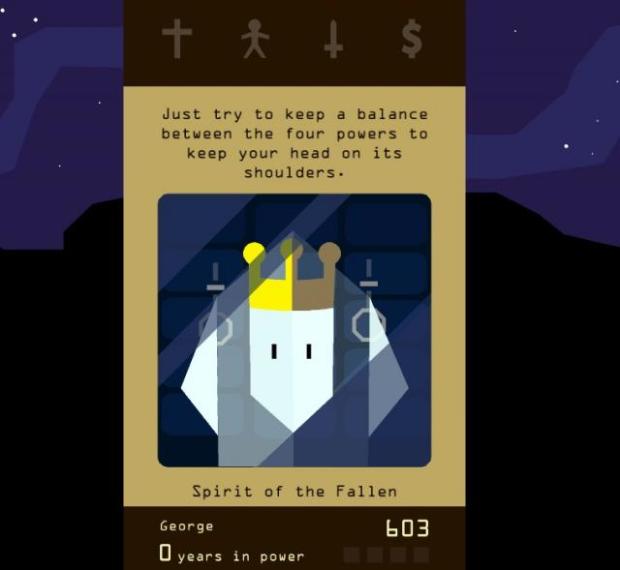 It all sounds very serious, but it’s got an odd sense of humour. If you eat a blue mushroom everyone will turn into rabbits. On occasion the palace executioner will dressed up in a fake beard and red suit and start giving gifts to the children in the village…on other occasions he will be concerned that he’s a serial killer. It’s…weird.

We’ve had the game for about a week and gone through more than fifty kings, and we’re still working to find every outcome to the game. It’s deceptively simple to play yet complex in it’s outcomes. It’s brimming with personality and humour, and we’re going to keep playing it.

2 thoughts on “Cheap Game Tuesday: ‘Reigns’ – An iOS Game Worth a Damn”