In the horror genre sometimes the written word has its advantages in storytelling over other mediums. A gifted author can craft words to tell a story which a movie could never do true justice to. This is the case of one of the best horror books of the 20th century, Ghost Story by Peter Straub. True, Straub’s novel was adapted into film, the picture was missing much of the terror which filled the pages of the book. 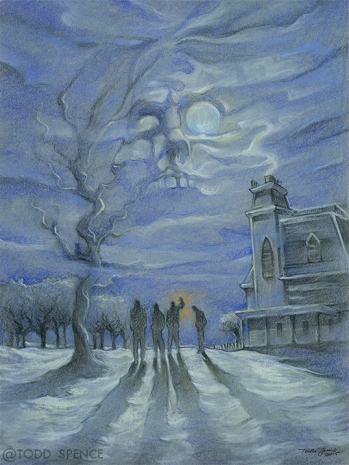 Society. When we enter the story one of them has died and the rest of the members know in the back of their minds this is only the beginning of something they want to keep secret. They reach out to the nephew of the fallen member for aid. Over the course of the book, the reader follows the Chowder Society as they take part in a tradition of telling each other ghost stories and slowly, we piece together that a larger force is at work and that none of these characters are safe.

Those looking for a strong pop and lots of jumps may be sorely disappointed. Straub opts instead to fill each page of this book with a looming sense of cold dread. Adding to the suspense is the fact that as the story unfolds the more we begin to care about the characters and wonder what they did in the past which has brought this evil down on them. Ghost Story is an absolute masterpiece of the horror genre and is the perfect read if you want a creepy and dreary tale to keep you up at night.