Plot: For twenty years Mark Renton has been building a new life in Amsterdam. Now returning home to Edinburgh he reconnects with Spud and Simon and begins pondering the events of his past. Things are thrown into chaos when the psychotic Begbie breaks out of prison and becomes aware of Renton’s return. 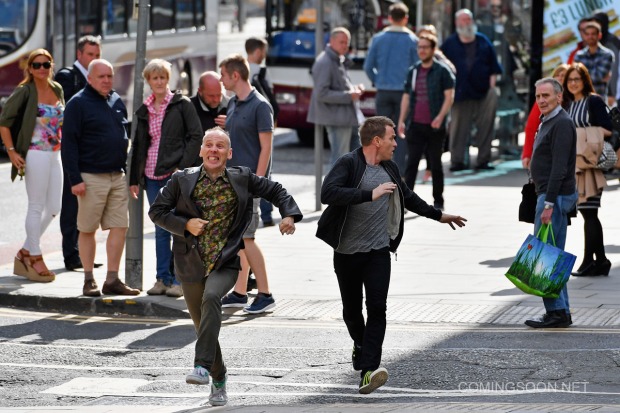 But director Danny Boyle hasn’t taken on this project lightly. It’s clear from the outset that a lot of time and effort has been spent developing the story and planning the film. At the time of the original films release Danny Boyle felt like a hot new talent. Now he feels like a great talent who’s been honing his skills for 20 years with rarely a misstep. The original cast have reunited to reprise their characters and put in some amazing performances (ignoring Johnny Lee Miller’s slippery accent) to round out the package.

We open with Renton suffering a heart attack on a treadmill, and then skip ahead to him returning to Edinburgh to find his old friends very much where he left them. Simon is still running scams, Spud is battling  addiction and Begbie is in prison. Simon is looking to turn his failing pub into a ‘sauna’ for his prostitute girlfriend Veronika to work in as Madam and recruits Renton to join him in this investment. Spud, meanwhile, is trying to follow Renton’s advice to redirect his addiction by channelling it into writing down his stories.

The movie does lean very heavily on nostalgia for the original film with musical cues and loads of footage cut through the story. Normally this would irritate me but as it ties into the characters own story of re-living their past and being unable to move on. Spud never got away from heroin, Begbie still wants revenge on Renton and Simon never got his big deal and has been spinning his wheels since. Some scenes are quite powerful, such as Spud unexpectedly finding himself on the street he was arrested on and a recreation of a shot featuring Renton talking to his parents, with his deceased mother being replaced by a shadow. More impressive are a number of scenes of their younger years. We’re not quite sure how some of these were achieved, if they were the original actors CGI’d younger or very similar looking stand-ins. One of the best scenes from the first novel involving an encounter with a drunk also gets included in a well designed sequence.

A major addition to the script is a more action packed final confrontation with Begbie. The much more violent and life-threatening situation in the film doesn’t fit right, almost like something out of a different movie. We feel it may have been more effective if they’d kept these part of the story closer to the book, something more akin to a random encounter with an act-of-God intervention. It may not have been as dramatic but it would’ve been plenty funny.

The take away message from this sequel is unexpectedly more relatable than the original story. The idea of your friends holding you back and contributing to your downward spiral is strong but not universal. This time around it’s very much about being unable to go home again. Our cast our coming to terms with their ageing and their place in the world. It’s a much more universal theme and all the characters feel has human and well developed as they did before.

Aside from the stumbling block of a third act action and stunt sequence, this is a very worthy sequel to a filth-ridden classic.