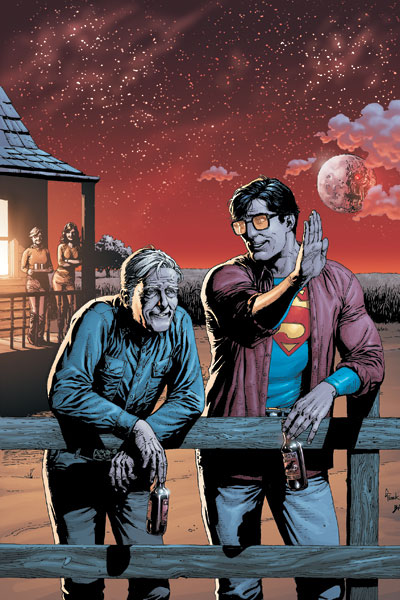 The Pull List started as a weekly spotlight on interesting new releases, but it has since redirected that spotlight to random thoughts about characters, storylines, and other comic book elements.

When did Superman STOP being the MAN of Tomorrow?

Yes, that’s melodramatic, but I am simply setting up a point I have always wanted to make about Superman.

I think I blame Christopher Nolan. It’s not really his fault, but Christopher Nolan fans in an age of 140 character limits have basically reduced what Nolan did for the Batman series to the easily marketable phrase “dark and gritty.” And with that, the flood gates opened for so much dark and gritty reboots of old franchises. Some of them made sense, I guess. James Bond, for instance. The Cold War was over and the most immediate threat wasn’t two authority figures in an espionage standstill. It was now these different splinter groups centered around misplaced ideology hiding within society among the rank and file. It kind of makes sense that the flirty party boy who fell ass backwards into villainous plots would be transformed into an anti-social psychopath who threw himself at bad guys like a wrecking ball. The Harry Potter movies got in on the action as well, however, it kind of worked stylistically because the movies matured with the actors playing the part of the children and, by extension, the fans who grew up watching them. (Daniel Radcliffe was about 11 when he started and about 22 when it ended). It didn’t work for everyone though. Hansel and Gretel were turned into weird action heroes, Crockett and Tubbs were rendered humorless, and, well, no one needs to be reminded about Josh Trank’s Fantastic Four.

Of course, what Nolan did with the Batman movie wasn’t even definitively dark nor definitively gritty. Maybe if you compared it to the cartoony pulp of the 60s series or the Day-Glo acid trip of Schumacher’s, but it was a lateral move compared to Burton’s. Burton’s had more Gothic flourishes and his own special brand of “Disneyfied” horror, but tonally, they were very close. Pretty much every other line from Morgan Freeman and Michael Caine was a punchline, and Christian Bale (as drunkard playboy Bruce Wayne), Aaron Eckhart, Anne Hathaway, and, to a lesser extent, Tom Hardy really needed to crank up the charm a bit to overcompensate for Bale’s patented monotone Bat-growl. It had life and electricity, and that needs to be remembered when we talk about superhero stories because cynicism is a bad look on blockbusters.

Blockbuster, in this context, does not refer to its original definition which described a movie so popular that people lined up around the block to buy tickets, rather, it refers to the new definition of a big budget action extravaganza with car chases, explosions, gun fights, karate fights, superhuman abilities, and hotties and beefcakes color corrected with an obnoxious combination of orange and teal scientifically proven to tickle the pleasure centers of our brains, whether you like it or not. What I am describing is less a cinema masterpiece and more of a rollercoaster experience. You wouldn’t frown on a rollercoaster, so why would you rely on a blockbuster to be exclusively dark and gritty?

It doesn’t help matters that two of the most successful on-going blockbuster franchises, the Marvel Cinematic Universe and, inconceivably, the Fast and the Furious franchise, are as known for their often (but not exclusively) humorous character moments as their action set pieces. Unfortunately, that has painted the other side of the pendulum as “more jokes,” a misunderstanding equal to thinking everything should be “dark and gritty.”

It might look like I am criticizing the direction of the DCEU so far, and you would be half right. It certainly plays a part, especially the inaccurate jokes vs grittiness argument, which is more of a side issue. However, Zack Snyder’s cynical take on Superman doesn’t exist in a bubble. Superman has been around for a long time (debuting in 1938), and that leaves a lot of room for a lot of interpretations, none of which would be wrong (except Electric Blue, that was very wrong). Others have had similar arguments, and I see Superman very differently, which leads me back to my original question (and maybe I won’t digress anymore):

When did Superman STOP being the MAN of Tomorrow? Or rather, why are so many trying to take the MAN out of the Man of Tomorrow?

One of the bigger cynical interpretations I mentioned belongs to Quentin Tarantino, featured in Kill Bill: Volume 2. Titular Bill explains that Clark Kent is an alias created by Superman to symbolize all the weakness and short-comings of the human race. Superman is who he really is, and occasionally, he masquerades as a dork to throw off suspicion. Maybe this isn’t Tarantino’s legitimate interpretation of Superman, but just something he made the villain of his movie say. However, filmmakers and storytellers have flirted with Superman projects with the same idea about a god who has to suffer living with mortals. It is that word “suffer” that never sat right. I do understand where they are coming from. An alien being sent his only begotten son to a new world where he would be near-immortal, have power over the elements, and become a savior for all mankind. Here’s point A. Here’s point B. And here is the straight line between them. However, there is always a “but…”

That particular interpretation makes the often used Jesus metaphors doubly muddy, especially since Superman started as a positive immigrant parable created by two Jewish men. Jesus’ mission on Earth was to raise humans up. He saw their potential, which, by virtue, is not looking down on them. Yes, Jesus was God, but he was also a man. He started as a baby in a manger and for 30 years believed himself to be just one of the guys. He wasn’t immune to sadness. He wasn’t immune to anger, and he wasn’t immune to death. Jesus struggled with the human condition, and that’s what makes our heroes interesting.

The same can and should be said about Superman. The fact that he was an alien came as a surprise. He was raised on Earth as Clark Kent, the son of Jonathan and Martha Kent, hard-working, morally upstanding individuals. They were the best the human race had to offer and, by extension, so was Clark. He wasn’t just some clumsy oaf in a wrinkled suit. He was intelligent, humble, honest, and unpretentious. He doesn’t truly change when he puts on the Superman suit. He’s more like Rachel Leigh Cooke in She’s All That. He combs his hair, takes off his glasses, and wears something more marketable, and suddenly everyone cares. The Bruce Timm cartoon depicted this really well. Clark was a man of few words. He was just a face in the crowd, and it was rarely ever about him being clumsy. Maybe I am remembering it wrong, but I always thought it was a nice touch that Lois rarely looked up from her computer or notebook when talking to Clark. She never really takes a good look at him. She drops everything for Superman though. (Looking for examples, I couldn’t find any and now I’m not sure if I am remembering correctly).

The ultimate argument against Superman is that he is too powerful, and that makes him boring. He can practically break every law of physics, and the only thing that can stop him is a glowing green rock. Furthermore, even if he wasn’t powerful, he is the kind of golly-gee-whiz kind of nice guy that makes contemporary audiences roll their eyes. I already talked about how Captain America proved that wrong. Where the hell was I going with it? Damn, this stream of consciousness. Let’s just wrap this up because the word count so far is crazy. It took me a while to get there. I condemned fan-driven describers too short to be accurate and the current state of dull superhero adaptations, but if there was anything I wanted to do, it was to defend Clark Kent. Superman is not a god cursed to live as a man, Clark is a man blessed with the opportunity to be a god.