Plot: Stand up comedian Kumail meets Emily following on of his performances. The two hit it off and form a relationship. After an intense argument and break-up Emily falls ill and is put into a coma, forcing Kumail to examine his feelings and life.

Review: Earlier today one of my students asked me what my favourite genre of film is. As gave my usual answer: I’m happy to watch any type of film, and I have favourites in every genre.

I can’t stand them. They’re contrived, they’re forcibly ‘quirky’ and they use the same, tired characters time and time again. They rely on ‘fate’ and ‘destiny’ clichés to resolve the plot and everyone gets all excited if one dares to do something shocking like ‘they don’t wind up together’. I have found very, very few that I have enjoyed. To some this may signify that I am in some way heartless, perhaps proof that I am, in fact, a robot (which is between me and my programmer, thank you very much). I find them annoying.

This movie though…I like this movie. I’m sure some people won’t classify it as a romcom because it doesn’t follow the usual flat stereotypes, but it has comedy and romance so it works for me. It feels much more genuine and heartfelt than most other romantic films doing the rounds.

This is in part because of the films unique origins. Lead actor Kumail Nanjiani wrote the movie with his wife Emily V. Gordon (played by Zoe Kazan in the film) and it’s based on their own experiences. This makes the circumstances of their early relationship all the more confronting, knowing that they lived through the experience themselves. There’s some seriously tumultuous emotions happening here.

We begin with an almost standard love story. We get a meet-cute and they share embarrassing moments and grow closer together. The sword of Damocles hanging over them comes in the form of Kumail’s family who want to follow in Pakistani traditions regarding marriage. He is constantly being introduced to women with the intention that one will be a the his future wife in an arranged marriage. Having already seen one family member be shunned for marrying outside of the culture.

Kumail keeps this information secret at, naturally, he gets exposed and confronted. Fortunately this doesn’t lead to shenanigans and mix-ups, or heartfelt confessions in the rain or airport terminals. It leads to a confrontation in which the characters do address what their potential future could be, and their emotions do get the better of them. These kinds of sequences can hit home for many viewers who have had to address big questions when dealing with the reality of new relationships.

Then, of course, Emily falls ill and is put into a medically induced coma while doctor’s struggle to find out what is causing a dangerous infection to spread through her body. Kumail finds himself at her side and meeting with her parents (Romano and Hunter). To compound by dislike of romcoms is my dislike of Ray Romano’s comedy, but he was good in this as the father is a terrible situation. Holly Hunter was brilliant as more extraverted mother of Emily, but she’s often brilliant and always fun to have on screen. 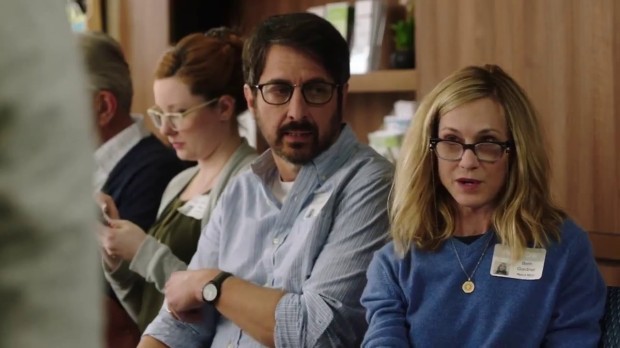 Whilst it doesn’t do anything revolutionary in terms of film-making The Big Sick feels substantially more genuine than almost every other romcom available. Yes, it is based on a true story but they use that well and never shy away from the sometimes raw emotion the characters exhibit.

One thought on “Movie Review: ‘The Big Sick’”