In the not too distant future a series of mad scientists and their assistants, will make attempts to break the mind of a revolving door of jumpsuit clad men. In order to do this they will be stranded in the Satellite of Love forced to watch the worst movies imaginable. Luckily they will have company from a group of wisecracking robots to endure this torment. The brainchild of Joel Hodgson, Mystery Science Theater 3000 is a show which took a lighthearted look at some of the worst films in cinema history. Joel served as the first host before passing the torch to Mike Nelson and currently Jonah Ray is aboard the Satellite of Love. The host along with robots Crow, Tom Servo, and Gypsy hurl insults at the cinematic travesties they are forced to endure.  From Comedy Central to the Sci-fi Channel and now Netflix, MST3K has built a massive fanbase which continues to grow.

Manos the Hands of Fate: I have written in a previous Retro Review, that to call Manos the Hands of Fate amateurish is an insult to amateurs (Retro Review can be read HERE). Now easily ranked among the worst films ever made, there was a time when Manos was all but forgotten. Joel and the ‘bots brought this movie out of obscurity and gave it the cult following it enjoys today. A family driving through the American Southwest are force themselves onto the bizarre man Torgo. Little do they know Torgo serves the Master who has a harem of women who fight each other in the desert. There are points in the film, you can truly feel our hosts become exasperated at the poor quality of Manos as they try to keep this terrible movie entertaining.

Mitchell: Joe Don Baker is an actor synonymous with B-grade cop films and Mitchell is no exception. The film begins with Mitchell as a crooked cop investigating the shooting of a helpless home invader at the hands of John Saxon. The movie moves on from there and becomes about a drug dealer and Mitchell in a bad sex scene….and honestly by the end of the movie I’m not really sure what is going on. This episode is beloved not just for the excellent riffing but because it is the swan song of series creator Joel as he hands the keys to the Satellite of Love over to Mike for the rest of the show’s run on cable.

Reptillicus: This episode was the moment of truth, after years of being off this would be the episode the show made its return with. The film itself is your standard Cold War-era science fiction flick with a giant monster, but it proved to fans that the show was in good hands. Introducing new host Jonah, new voices for the ‘bots, and fan favorites Felicia Day and Patton Oswalt as the new mads, as well as the traditional bad movie riffing all in a single episode was a lot to accomplish. This episode put any worries to rest and treated fans to a mocking of a giant reptile attacking Denmark.

Santa Clause Conquers the Martians: I must admit I have a soft spot for this particular episode for it is one myself and members of my family always enjoy watching during the holiday season. As you may have guessed this movie involves Santa Clause going to Mars. On the Red Planet he teaches the stern Martians the joys of the holidays. The filmmakers’ hard work is on display with laughable costumes for a robot and a bear (according to the opening credits the flick had a “Custume” Designer”). The biggest thing fans remember this fine episode for is the musical number “A Patrick Swayze Christmas” performed by Crow celebrating the movie Road House.

Space Mutiny: After a little indie film called Star Wars was released it seemed everybody wanted to make their own space opera with a touch of mysticism to get a piece of that George Lucas Pie (said pie tastes like beard and unnecessary CGI). This South African film about a musclebound fighter pilot and his middle aged woman main squeeze saving their starship from being taken over by a terrorist group is easily one of the worst. A Santa Clause look alike captains the ship, a character who is killed is back a few scenes later, and the villains are laughable in their evil. The highlight of this episode is easily all of the names Mike, Crow, and Tom come up with for the protagonist. 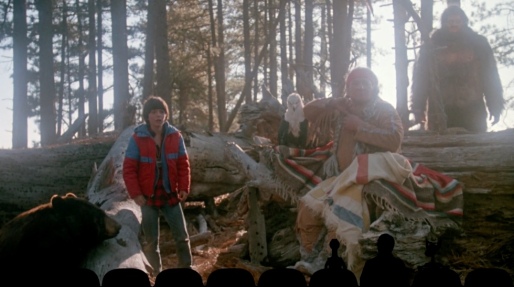 Cry Wilderness: WILDERNESS!!!!! Now we got that out of our systems, given that I frequently write about the paranormal and unexplained for this site a Sasquatch movie is right up my alley. A young boy is given a vision from Sasquatch (thanks to this mystical necklace or something) that is father is in danger. Something in the Pacific Northwest, where his father is a park ranger, is wreaking havoc on the animal population, and an alpha male jackass comes in to help with the situation and hunt a Bigfoot. Despite it’s recent release, Cry Wilderness has already become a fan favorite and is arguably the best episode of Jonah’s era.

Pumaman: Superhero movies are all the rage right now, but let us not forget that filmdom has not always churned out such masterfully made flicks in the genre. Starring acting legend Donald Pleasence who is eager for a quick paycheck. A young man discovers he is the next in line to receive the power of the Pumaman so he can be the white savior to the people of South America. Mike Nelson and his mechanical assistants hold nothing back in riffing this B-grade superhero flick, while being driven crazy by Pleasence’s pronunciation of the hero’s name.

The Final Sacrifice: One of the greatest gifts MST3K has granted upon humanity, is introducing fans to the beer drinking Canadian hero Zap Rowsdower. When an annoying little kid is being pursued by an evil cult hoping to find a long lost city in the Canadian wilderness he seeks aid from a schlubby guy in a beat up truck who ends up being one of the biggest badasses in film history (there is a bit of hyperbole there). You can tell Mike and his crew are having a blast riffing this low budget Canadian thriller while still giving the proper reverence to its hero.

Time Chasers: A dumpy guy on a bicycle discovers the technology to time travel thanks to his small airplane. Naturally an evil business man with his headquarters in a library seeks to steal this technology for his own evil gains. This leads to an adventure through time….or as much time as they could afford on a limited budget. This episode has earned a certain fame, because the cast and crew requested this film be riffed not knowing what they were getting themselves into.

Gamera: The not as popular as Godzilla kaiju monster from Japanese cinema has become a go to for MST3K episodes. A prehistoric turtle monster buried beneath the Arctic, Gamera,  is awakened by an atomic blast and naturally decides to terrorize Japan. The tension caused by sitting through this cult classic at one point drives Joel to tear Crow’s arm out. Overall MST3K brought this beloved monster movie to a brand new generation.

The Touch of Satan: It is a tale as old as time; boy drives aimlessly and meets girl and girl turns out to be a centuries old witch. This strange and stupid horror movie has plenty of bewildering moments which draw the mockery of those watching it.  To be completely honest I always crack up when Tom Servo sings the song he made up to go along with the opening credits. One of the segments intersprersed during the screening is a particular fan favorite as the robots carol for Wassail with great repercussions if they do not get said Wassail.

One thought on “Best Episodes of ‘Mystery Science Theater 3000’”