Plot: A mute bartender’s search for his missing girlfriend takes him into a criminal underworld full of sex trafficking and backroom surgeries.

Mute is the long awaited follow-up to Moon, Duncan Jones’ directorial debut featuring a powerhouse performance from Sam Rockwell. Eagle-eyed Moon fans will see easter eggs that prove that both movies take place in the same world. Between these two movies, Jones worked on two different movies: the small-scale sci-fi thriller, Source Code, which seemed to strike with audiences a lot more than Moon, and the big budget video game adaptation, Warcraft, which didn’t seem to strike anyone’s fancy. And all that time, I was just patiently waiting for Jones to have the kind of hit that would allow him to get Mute made.

With Mute, Jones goes for the cyberpunk technoir like Blade Runner, and from a production value angle, he nailed it. He creates a Blade Runner esque version of Berlin that feels real and lived in. He avoids the stark white, very sanitized Apple store version of the future for more neon soaked rainbows penetrating dark shadows. It’s very reminiscent of classic noir, except instead of noen it was LCD/LED type lighting. There are still dirty and broken down areas and classic “artifacts” (for lack of a better word) from previous generations all over. On top of which, he captures a real gradient of upper class living to lower class, and how technology finds its way into either class, just at different degrees.

As a piece of world-building, Mute is quite good. The story leaves a lot to be desired, sadly. It is essentially two arcs that never feel like they are cohesive until they finally cross paths in the most obvious way possible, which makes most of the movie feel like wheel-spinning.

The first and biggest part of the movie revolves around Alexander Skarsgard’s Leo, who is the titular mute of the movie. It all starts with him as a boy, bleeding, face down in a lake, a classic of film noir ever since Sunset Boulevard. He has his neck cut open thanks to a speed boat accident, but his family won’t let doctors help him because they are Amish. Years later, he is a bartender at a fancy club and dating one of the waitresses. When she suddenly goes missing, he tries to track her down.

The woman in question is the kind of blue-haired, free-spirited punk that would just get up and leave one day without saying a word, and so there is never anything suspicious about her sudden disappearance. It is exclusively motivated by Leo’s heartbreak. And with nothing suspicious to get him started, he essentially walks down a series of dead ends to find nothing. Everything is a red herring. Nothing is a sliver of a larger pie.There is no conspiracy for him to hold on to, just a real weird world that Jones is having way too much fun exposing.

The only thing of interest that happens with Leo is how helpless he is in the world. Not only does he lack the ability to communicate, but his Amish background makes him a pretty big luddite, even in this very technologically advanced and dependent time. He barely knows how to use a phone and communicates solely through his pencil and notepad (there is even a scene where his pencil breaks and he stares at it longingly like a dying pet). Meanwhile, a few blocks away, amputees are being fitted for state-of-the-art cybernetic spare parts (including voice boxes), as if there was never anything wrong with them. 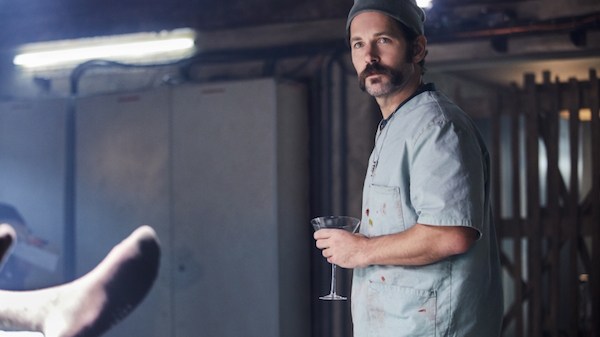 That makes up the second part of the story, which I find much more interesting. Paul Rudd plays Cactus Bill, an epically mustachioed surgeon, disgraced for reasons I can’t remember ever being brought up. Whatever those reasons were, they kept him trapped in Berlin unless he can get himself some fancy new identification. He makes ends meet sewing up gunshot wounds for the mob, and when he’s not doing that, he splits time caring for his young daughter or partying with his surgeon buddy, played by Justin Theroux. It is a throwback to early Paul Rudd, before he was typecast as a nice, friendly dude. He really leans into the biting sarcasm and even gets to be intimidating from time to time.

Unlike Leo, his story feels like it has a ticking clock. It appears around every corner is a new underworld character who has it out for Cactus, and he is desperate to get out before he suddenly finds himself not so untouchable anymore. That tenuousness of his situation paints all his events as dire, even the ones that aren’t inherently so. Once he finally crosses Leo’s path significantly (since they bump into each other casually form time to time), his life suddenly becomes as dull and misguided as Leo’s.

I was really bummed out not to like this movie. However, I am still interested in what Jones has to offer in the future. I’d even like to revisit this world at some point. He’s created himself an amazing canvas to paint a portrait on, he just needs to find a story as worthwhile as his location.