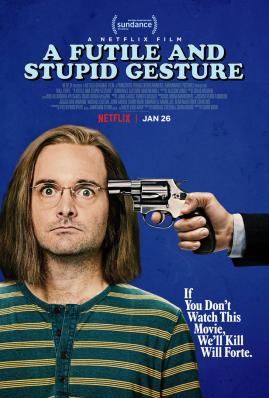 “Every funny person in the world is here, but no one is laughing,” says Jon Daly as Bill Murray during an especially dour scene; a line I think ultimately captures the tone of the movie as a whole. It is the story after all about the guys, Doug Kenny and Henry Beard, who inspired an entire generation of comedy taste-makers in that same way that the best band of all time is some dinky garage band that all the bands we grew up listening to saw once and were forever inspired by their passion and artistry. Instead, it stays a lot closer to the classic biopic storytelling that we know with the mission to peel back the artist-audience barrier so we can see the chaos, anger, and sadness that fueled their fires.

It is surprising enough to tell the story of the most infamous comedic voices as conventionally as it appears here, even more so when you consider its director, David Wain, is as much a stranger to convention as those original lampooners. With the exception of Role Models, most of his career could be divided between subversive alt-comedy and sharp parody.  However, with A Futile and Stupid Gesture, the closest he gets to allowing “unconvention” to seep in is the fourth wall breaking narrative voice of Martin Mull as the older and more cynical version of Doug Kenny. Mull appears as himself, sometimes interacting with the physical world, not just a disembodied voice, although, those who know Doug’s real story might be confused since he never made it to Mull’s 74 years of age. 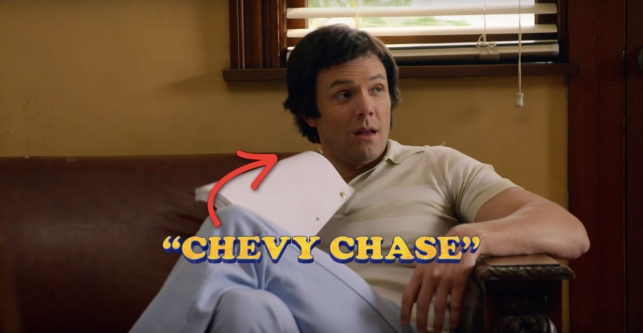 Mull tries to coax the audience across the threshold of disbelief, since no one really looked or sounded like the people they were playing, especially Will Forte who was portraying Doug in his 20s while 47. And it works! It is a classic lampshading, so obvious there is part of you that desperately wants to roll your eyes at it, but once it is out of the way, you can enjoy the little things and not worry about Jon Daly’s impression of Bill Murray or John Gemberling’s impression of John Belushi. It especially helped Joel McHale’s impression of his former “Community” co-star, Chevy Chase. McHale didn’t look much like young Chevy, nor did he really sound like him (his attempts at physical comedy are even worse than Chevy’s), but Chase and Kenny had a close relationship that plays in a few key scenes, and in order for it to work, we have to just accept it.

As a movie, it selectively colors outside the lines to be a better piece of history, but it also selectively colors outside the lines of history so it could be a better movie, leaving it a little sloppy. With that said, it eventually hits you what this movie really is: an honorable salute by a new generation of comedy voices to a previous generation of comedy voices. The torch has been passed (a few times), but this generation isn’t just moving forward. They took the time to look back over their shoulder, and that alone is kind of cool.

One thought on “Movie Review: ‘A Futile and Stupid Gesture’”