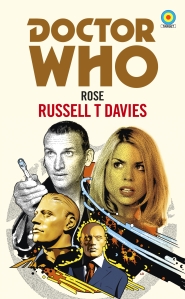 If you were a Doctor Who fan during the classic run, the Target Books range of novelisations was a must have. They were a way to access stories which it seemed would never again see the light of day after broadcast, and so contributed to the longevity of Doctor Who as a multimedia franchise long before that expression was invented. Often written by the original screenwriter, or by former Who script editor Terrance Dicks if they weren’t available, the books either faithfully translated good scripts to the novel format, or improved hugely upon bad ones. Target Books would eventually be killed off at the end of the 1980s, but now as part of a ongoing effort to make Doctor Who past and present more accessible, the BBC has recently revived the defunct imprint for a new range of novelisations. Thus far, five have been released, spanning from the very beginning of New Who in 2005, all the way to the most recently aired Christmas special, with a quick detour via 1979. “Rose”, “The Christmas Invasion”, “The Day of the Doctor”, “Twice Upon A Time”, and “City of Death” have all received the Target treatment, with “City of Death” being an abridged version of James Goss’s adaptation I reviewed here a couple of years ago. Naturally, being a man with uncontrollable spending habits and access to Book Depository, I ordered them all when they came out and they arrived last week. It goes without saying that the following review is peppered liberally with spoilers.

Former show runner Russell T Davies has returned to Doctor Who to adapt “Rose”, and haven’t we missed him? Davies is afforded a rare opportunity here to take stock of his own creation years after it went to air, and you definitely feel that he is trying to fix a few things. Broadly the novel is a straight translation from screen to page, but Davies has the time and space to flesh out a few characters. The prologue is pure Target – it hooks in the reader with an unexpected bit of worldbuilding in Rose’s workplace, Henrik’s department store. Later on, we are treated to a repositioning of Mickey away from the weak coward he tends to seem in the first series, towards a characterisation of a kind, simple guy with a tragic past who nevertheless has time for everyone and is happy with his lot. Rose as a consequence is far less cruel to him, and their parting of the ways at the end of the story is much friendlier.

Rose herself gains some well deserved expansion – she is a good egg who has lost her way, and needs something of a kick in the pants to be the success she can be. She is also accessible and relatable, more so even than she was originally. When she cowers in fear at the first attack of the Autons in the Henrik’s basement, we learn she’d “always imagined…she’d be magnificent”, and that later on after the fallout of the store’s destruction, she navel gazes with the realisation that “it is an enormous blow, to be what everyone expects you to be.”

Davies’ prose style is an excellent bonus for this rebooted Target range. I tore through it in three or four hours, during which I couldn’t put it down. His enjoyable use of metaphors (“slaloming down a hillside of lies” was my favourite), plus realistic dialogue (as befits one of the UK’s great screenwriters) keeps the story moving, and like the episode itself it never lags. Even the Doctor’s melodrama about feeling the earth constantly spinning and falling through space suddenly seems a lot more meaningful and intense. There are modifications to the dialogue in some places, which make sense and are decent revisions. Some of the changes to how events play out are agreeable, and with Davies’ talent for descriptive language are made a lot more exciting, especially during the climax. Then there are some changes which are slight, which makes them jar, and thus are baffling. One thing though that I found especially enjoyable was that Clive, the man Rose finds online who has been tracking the Doctor’s appearances throughout history, has found out about more than just the Ninth Doctor. His shed is full of references to every other Doctor, and then some. This wouldn’t have had a place in the originally broadcast episode because it would have been way too inaccessible for new viewers, but as a hack it pleases me that Clive was much more thorough than he seemed (he’s also positioned much more as a classic Who anorak and I related to him more than I care to admit). I suspect the novel was based on several versions of the script, rather than just the final episode edit.

The BBC have been doing a bit of brand unification on Doctor Who in recent months. The new logo released to coincided with the debut of Jodie Whittaker’s Thirteenth a Doctor is now being applied to classic Who merch, starting with an upcoming BluRay boxset of Tom Baker’s first season in 1975. Previously (we’re talking since the 1990s) the “classic Who” merchandise logo was an adaptation of the one used from 1970-74 and most widely associated with the Third Doctor, so the change is a significant one which marks a conscious marketing reunification of the two eras of the show into one continuing narrative. Interestingly this change of logo has not been applied to the new Target range, and so we can look at the Target brand revival in two emotionally opposite ways: the simple revival of the Target imprint is about giving new fans a chance to have a genuinely retro classic Who experience, or it’s just replicating that experience to cater for the anoraks and hacks because anyone old enough to remember when Target Books was a thing is now well into adulthood. Certainly I would say that the new novelisations are more for fans in a way that the revived series in 2005 could not afford to be. So, you decide!

Anyway. I loved this book. From oblique references to the UNIT Dating Controversy and the aping of internet sensation Big Shaq’s “Man’s Not Hot”, to the faithful recreation of a truly underrated Doctor, “Rose” will delight all readers, but will especially reward fans. An accessible, easy read to give a break from more weighty tomes, there should be a place in every Doctor Who fan’s shelf for this book. I can’t wait to read the rest of the new releases, and if what the writing team say is true and there are more to come, I think we can look forward to those too.

One thought on “Book Review: Doctor Who “Rose”, by Russell T Davies”