As many of us know cards games are not always for kids, and in the case of the new card game Dirty Drawers it is REALLY not for kids. Dirty Drawers is like the vulgar result of 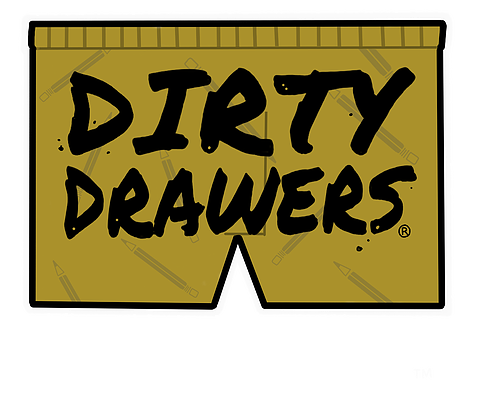 mixing Pictionary and Cards Against Humanity, and frankly it is an absolute blast to play. The game requires at least 3 people to play but honestly the more the merrier as you learn the twisted side of your friends’ imaginations. Recently I was able to test Dirty Drawers out with my friend and Nerd Night Memphis host James Weakley and it was nothing short of a hilarious and easy to play game.

The game begins with sorting the cards into 4 stacks (well technically 3.5 stacks), stack 1 is the descriptors, 2 is the subject, 3 are actions, and 3.5 are used occasionally to compliment said action. Each player has a piece of paper and a pen (or pencil if you choose) in order to compete. The game features a lone player serving as judge, armed with a 6 sided dice and the Judge Card, each number on the dice corresponds with a criteria on the Judge Card. Once the judge rolls and a card from each stack is revealed, the players begin to draw what the cards describe Depending on what the judge rolled the players will be competing to see who can draw; the cutest, most detailed, most detailed, or any other of the six options.

What makes Dirty Drawers fun is what the cards ask the players to draw. You could just as easily draw a legendary picture of a cyborg ghost pole dancing in an inappropriate place to a cute picture of dildo-horned contortionist having an alien burst out of their chest. Sure you may draw some strange looks if you play in a public place, but that is the price to be paid for fun. This card game is quick and easy to pick up on and start and I am sure would go great with a couple of drinks. As the tagline says it really is a “mature game for immature people” but honestly that’s what makes Dirty Drawers so much fun. For more information on this game and for news about the Kickstarter for it be sure to check out their web site dirtydrawersgame.com.