Movie Review: ‘Ant-Man and the Wasp’

Plot: Two years after the fight in Captain America: Civil War, Scott Lang is reaching the end of his house arrest sentence. Meanwhile, Hank Pym and Hope have been building a Quantum Gateway in an attempt to rescue Janet van Dyne from the quantum realm. 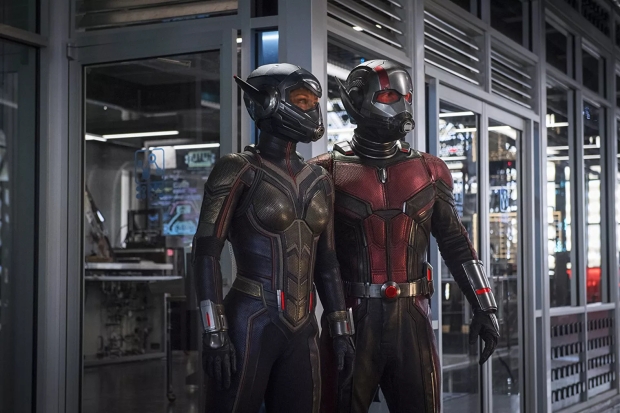 Review: You’ve gotta feel bad for any film in this franchise that has to follow on from Infinity War. Especially since everyone is waiting for a resolution to that epic…you’d run the risk of any film coming across as filler to keep us happy until Avengers 4.

And yeah, Ant-Man and the Wasp feels like filler.

It’s not bad, but it’s easily the weakest entry into Phase 3. Guardians of the Galaxy Vol. 2 was messy but it at least felt inspired. AMatW doesn’t push any boundaries, shake things up or even feels as though it’s got much to say. The plot and character development are both on thin ground.

Hank Pym and Hope van Dyne have been experimenting with opening a gateway to rescue Janet (now played by Pfeiffer), which leads to Scott having a weird dream in which he relives Janet’s memories. Hope and Hank spring Scott from house arrest in a bid to tap into this link. They also need to obtain equipment from unscrupulous black market dealer Sonny Burch (Goggins) who decides he wants to get his hands on Pym’s lab. They are also pursued by the mysterious Ghost (John-Kamen), a woman who can phase through solid objects and also wants to steal Pym’s lab.

The emotional core of the movie has shifted from Scott Lang to Hope searching for her mother, but they seem to be struggling to give Lang a reason to help out. Obviously he’s on board with trying to help, but if he’s caught outside of house arrest he won’t see his daughter and her ridiculous Disney eyes for 20 years. This conflict never quite gets addressed so it feels like Hope and Hank don’t give a shit about Scott losing his daughter. It’s hard to emphasise with their quest when they keep bulldozing everyone else affected by their behaviour. Ghost herself is suffering because of Pym’s experiments, but they never explore this and Hank is completely disinterested in making amends because they conflict with his mission.

The effects and choreography of the action scenes are still as impressive as ever. There’s some comedy to be had with Lang’s malfunctioning suit and Ghost makes a good opponent in terms of matching powers. The fights are quickly paced and Reed does a solid job of making it easy to follow. Many of the best parts, however, are featured in the trailers so if you’ve seen them all then there’s few surprises.

On that note, this is the clearest case of the trailer spoiling the best parts of the film the MCU has ever seen. All the best uses of effects, the character’s power sets and the comedy are all in the trailer. It feels like the studio didn’t have much faith in the story and threw everything they had into the marketing. Even the second credits scene is centred on a gag that appeared in the trailer. Don’t do this.

It’s good that the MCU finally put a female character in a headline role, even if she’s sharing the title with an established male character. It’s just a shame that it’s a weaker entry in the franchise. Hopefully Captain Marvel turns things around because it’s ridiculous that the MCU has been running for a decade and they haven’t taken advantage of the brilliant female characters Marvel has been showcasing for decades.

While this review may feel negative this is a good, fun film. But we don’t need to reiterate what makes the Marvel films good at this point because they’re still doing these things well. In the grand scheme Ant-Man and the Wasp will likely been viewed as ‘another Marvel film’.