After the rematch plot of the second film the one thing that we’re most looking forward to in this second sequel is a new challenger to step up to the plate. And who better that Mister Goddamn T!

Plot: Rocky is once again riding high, now the heavy weight world boxing champion effortlessly knocking back all challengers. He’s the pride of the city and living the high life in a lavish mansion. Up steps Clubber Lang, a new rival who claims Rocky is only taking on easy wins. 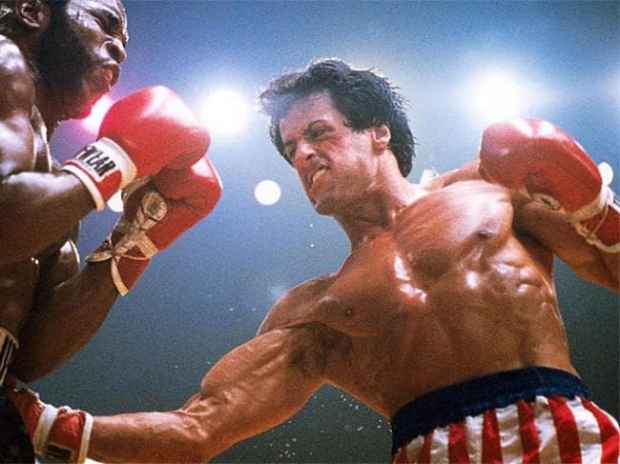 Review: Ok, this is what I meant when I said there are more creative ways to pick up from where the last movie left off. Create a montage of news clippings. It’s a technique that is a bit over saturated at the moment, but we can give this one a pass. We learn right off the bat that Rocky is the champion and having no problem holding on to his belt. In the crowds we see the angry visage of Mr. T, or Clubber Lang as they perplexingly insist on calling him (as though he’s meant to be anyone BUT Mr. T) giving Rocky the stink-eye. For all the praise I just gave the opening sequence, I do need to backtrack a bit and point out that this is a really lazy way to introduce are new rival.

We later learn that Mr. ‘Clubber Lang’ T is from the mean streets of Chicago, leaving a tough life among the gangs before landing himself in prison. It’s here that he discovered a talent for boxing. Unlike the noble minded Rocky and Apollo, T is a vicious, hostile and mean-spirited sportsman, showing nothing but disrespect for his opponents. In their first bout Lang takes the title from Rocky but insults Apollo Creed, who in turn trains Rocky for a rematch.

There are some parts of this story that work really well. Clubber Lang is an interesting new rival for Rocky because he presents our protaganist with a role reversal – Rocky has gone from being the underdog contender to the champion defending his title from an underdog challenger, albeit one from the wrong sides of the tracks. It’s a shame that they didn’t devote more time to Lang’s character and backstory. If they’d had the gumption to do so they could have muddied the idea our the hero by giving us a sympathetic villain who makes a very valid point. Could’ve been a real Killmonger.

It was certainly unexpected when we learn that Lang’s accusations were actually true, and Rocky’s manager Mickey (Meredith) had been pretty selective in setting up opponents for Rocky, in order to help him maintain his spot as champion. It’s a powerful moment when Lang defeats Rocky, making him feel as though he wasn’t as good as he and everyone else thought. Sadly they went in a different direction, leaning into Mr. T being a big ‘ol meanie to inspire Apollo to side with Rocky against him. Oh, and he killed Mickey because fuck character development when you can just have a revenge quest.

Unfortunately the film makes Mr. T feel like a support player. Instead of really digging into the potential they’d set up they pad out the meagre running time with a bizarre bout against wrestler and pop-culture phenomenon Hulk Hogan. Hogan is playing Hogan in the same way that T is playing T, but for some batshit reason he’s calling himself “Thunderlips”.

Yes. “Thunderlips”. The “Mountain of Lust”.

This oddball name and personality is really distracting. At this point the series is starting to feel like a cartoon. There’s also a moment when the franchise theme music is being played by a band in the film. I hate it when movies playing the soundtrack in universe, it just feels weird.

The movie is further fleshed out further by the latest in training montage technology, this time featuring Rocky and Apollo frolicking in the ocean together. It’s very out of place. 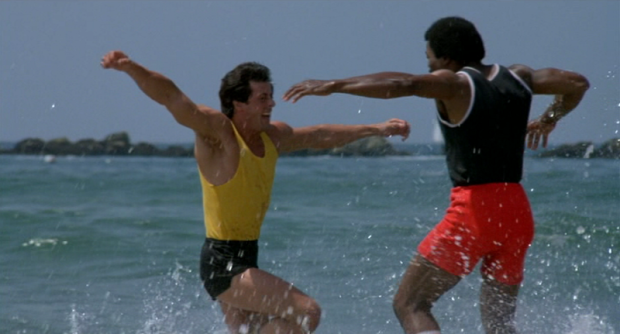 Paulie remains a piece of shit and I hope he dies in a future instalment. When Apollo takes Rocky to his original gym in LA and Paulie is straight up racist about being stuck surrounded by black people.

In what I suspect is going to be an ongoing problem, the colourful new rivals are going to be pushed to the side so Sylvester Stallone to mumble incoherently.