Oof, these movies are going downhill fast…I can’t imagine this final named instalment, one that defied established naming conventions is going to be up to much.

Plot: Rocky Balboa, now widowed, is somewhat estranged from his son, retired from boxing and filling time with a restaurant business. When a computer simulated fight pitting him against the current champion shows him triumphant is reignites public interest in seeing him box. 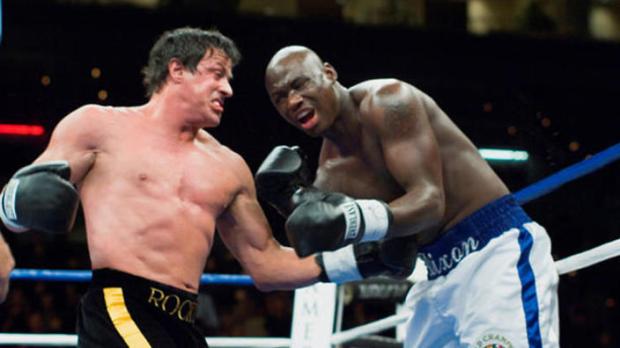 Review: Watching all these movies back to back over the course of a few days makes it hard to appreciate the passage of time between major events. To my mind Rocky went from a young, single man trying to prove himself to the world to ending the Cold War between new episodes of The Good Place. Nothing makes be release the jump between the fifth and sixth movies like hearing The Killers on the soundtrack.

It’s been a solid 16 years since the disappointing ‘conclusion’ to the popular series, and surprisingly a 60 year old Stallone decided to revisit the physically demanding one last time and possibly put in his best performance yet. Although they KILLED ADIRAN OFF in between movies! I assumed this was something do with Shire not wanting to return, but they wrote her out! And left FUCKING PAULIE! BOO!

Oh yea, Paulie is still around and as disgusting as ever. We refers to some African Americans as “who’s these criminals?” and advises people to “hide the silverware”. They can kill Adrian off screen but they can’t include someone punching the snot out of Paulie. Boo.

With those weird writing decisions put to the side, this is a genuinely strong movie driven by well developed character pathos instead of another cartoon villain. Rocky may have accepted his current lot in life but he still yearns for something more. His son, Robert, avoids him as he feels like he’s spent his life overshadowed by his famous father. The only new(ish) person in his life is Marie, a young bartender who also happens to be the young girl Rocky walked home and lectured in Rocky.

I quite like this character relationship and how they wrote it. For one thing if never got creepy – which, given Rocky’s history with relationships was a very real possibility – but they didn’t pretend that wasn’t a possibility. It’s a well written look at a bond between two adults who are both unsure what to do with themselves. I checked to see if this was the original actress for this role and although it isn’t, the original actor did film scenes from Rocky V and was fortunately spared participation in that mess.

When a computer simulation depicts Rocky beating current champion Mason ‘The Line’ Dixon, Dixon wants to prove that he can beat Rocky. His publicists manage to tap in Rocky’s desire to prove himself and they set up an exhibition match. Amid intense scrutiny from the press and the public the match goes ahead and quickly turns intense with it ending in a closely edged out win for Dixon while Rocky is satisfied for seeing the match out to the end.

We really enjoyed this movie. The clunky fifth movie completely failed to feel like Rocky returning to his roots, but these movie is soaked in them. The cameo from Predro Lovell, who played Rocky’s first ever opponent on film Spider Rico, as an employee of Rocky’s restaurant strongly reinforces that people from this world rarely manage to escape. As the new rival, Dixon contribute to the overall tone by coming in as a well rounded and sympathetic character. He’s a fast, powerful fighter who earned his title as champion but never got the respect that past champions saw.

So everything is grim and interesting when we get into the final match of Rocky’s life. Things start out strong but they lean into using a weird black and white/selective colour trick to make it all feel more dramatic but they’d honestly build up enough through the story alone. They also pull out from scratchy looking flashback footage which isn’t necessary.

The final sequence is also cheapened by some of the most awkwardly crowbarred in product placement we’ve ever seen in our life. Yes, we know that the real boxing industry isn’t much different but they didn’t actually have to do this. Paulie has a Golden Palace hat, the ring has it stamped in the middle, it’s announced every three seconds and even stencilled across a woman’s breasts. Calm the fuck down, people.

If they’d left the character here it would’ve been a surprisingly strong end to the series. But apparently there’s another…I’ve heard it’s ok.