Plot:  Three years after losing to “Pretty” Ricky Conlan, Adonis Creed (Michael B. Jordan) has become the WBC Heavyweight Champion of the World.  With the assistance of trainer Rocky Balboa (Sylvester Stallone) and girlfriend Bianca (Tessa Thompson), Adonis blazes his own path in the annals of boxing.  However, Adonis is forced to confront his father Apollo’s death and legacy when Viktor Drago (Florian Munteanu) son of Ivan Drago (Dolph Lundgren), the man who killed his father in the ring, openly challenges Adonis to a boxing match.

Review:  When Ryan Coogler’s Creed dropped three years ago it revitalized a franchise most thought had ended with 2006’s Rocky Balboa.  A box office and critical success, there was little doubt we’d get a sequel.  This time around director Stephen Caple Jr. is at the helm.  While Creed II isn’t as polished as the original and occasionally falls prey to formulaic beats, Caple’s film stands as one of the better sports sequels in recent memory and a rousing new addition to the franchise.

The best thing that can be said about Caple’s direction is that Creed II is singularly his vision.  Creed II possesses a grittier feel both in tone and appearance, something that distinguishes it from Coogler’s film.  This especially holds true during the boxing scenes where the lighting is darker or Viktor’s training sequences which are decidedly bleak and stark.  (But then again it is supposed to be winter in the Ukraine so what do you expect?)  You have to respect the fact that Caple was bound and determined to make his own film and not ape Coogler even if it doesn’t always work.

Stallone (who at one point was pegged to direct) returns as a screenwriter for Creed II alongside Juel Taylor.  Stallone’s script leans into the Rocky sequel formula a bit heavily at times, with shades of Rocky II, III, and IV casting a shadow.  Yet Creed II isn’t as predictable as you might suspect, nor is it a surface level sequel.  Creed II addresses how past decisions and actions can haunt us and have real consequences for those we love, keeping what’s really important in the forefront of our minds, and the complex relationships between both fathers and sons both real and surrogate.

It is this last that packs the most emotional resonance, particularly the relationship between Ivan and Viktor. Dolph Lundgren somehow manages to take an iconic but cartoonish villain and elevate him into a fully fleshed out character. Ivan is a broken man abandoned by his wife, ostracized by his country for losing to Balboa, and quite literally living hand to mouth. His only salvation is his son Viktor, who he sees as a vehicle for redemption and returning to the world stage. How their relationship evolves makes Ivan’s surprising final act in the film completely earned. Stallone’s script succeeds in making Ivan and Viktor sympathetic characters to the point that–and I can’t believe I’m saying this–you may be ambivalent about who to root for when the final fight comes.

Michael B. Jordan once again shines as Adonis Creed and while Creed still felt like a Rocky movie, by the end of Creed II it becomes patently obvious that this is now Jordan’s franchise.  Jordan is not only a talented actor in his own right but in my opinion a bona fide movie star.  In fact I wouldn’t be surprised if we get a Creed III if Stallone isn’t even in it.  Jordan and Stallone’s chemistry is just as good as it was last time.  Stallone wears Balboa at this point like a finely crafted glove and after eight films, his character remains just as endearing as he was in 1976.  Rocky is a character that’s survived cancer but has a distant relationship with his son Robert (Milo Ventimiglia).  How that eventually plays out is just as satisfying as any other emotional moment in the film. Tessa Thompson’s Bianca is also expanded in Creed II.  She doesn’t merely serve as Creed’s muse, pursuing her own career while simultaneously dealing with the challenges of motherhood and her hearing loss.  If anything Bianca possesses more agency than she did in the first film and the way she supports Adonis in the final fight is as surprising as it is satisfying.

Speaking of fighting, the boxing matches in Creed II are just as lively and epic as you might hope.  It helps that Adonis finally has a worthy adversary in Viktor Drago, as Florian Munteanu is an intimidating and malevolent presence.  He also, surprisingly, can act pretty well.  I fully bought the strained relationship between Viktor and his father.  Ditto the training montages for both Adonis and Viktor which were in stark contrast to each other but equally cool.

Overall, Creed II succeeds as a sleek follow-up that’s rousing, emotionally satisfying, and will be sure to please fans of the previous Rocky installments.  Yes it relies on some formulaic tropes but Coca-cola has been doing that for decades with no complaints.  While Creed II isn’t quite a knockout, it’s definitely a solid jab to the jaw. 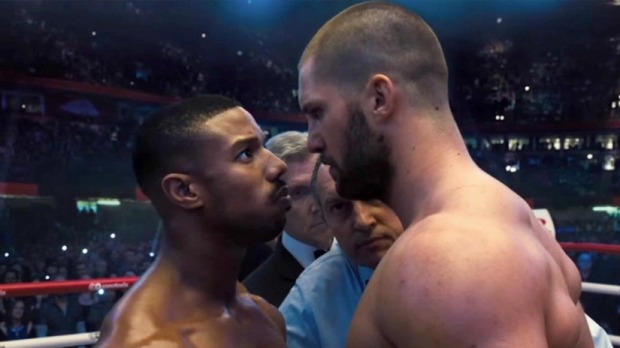