1980: Roland and Wayne make a discovery regarding Will and Julie’s friends. Brett Woodard is attacked. Wayne uses his tracking abilities to uncover more clues while drawing closer to Amelia. Roland and Wayne investigate a local factory. A new unknown suspect joins the fray.

1990: Wayne and Amelia stake out the Walgreens where Julie’s prints were discovered. Hays loses his daughter in a Wal-Mart for a short period of time. Roland West gives a deposition regarding the Purcell case. Roland checks in on Tom, a recovering alcoholic who now lives alone. West makes an offer to Hays to rejoin the Purcell case.

2015: Wayne and Henry make a trip to the doctor after Wayne’s incident. Hays continues the interviews and discovers certain leads may have not been followed up. Amelia’s ghost haunts Wayne.

Review: As the saying goes, “the plot thickens.” This week’s episode of True Detective makes a concerted effort to develop its main characters, although there is little in the way of action. “The Big Never” feels much more cerebral and I mean that in the best possible sense.

I appreciate how Pizzolatto and company delve further into the character of Roland West. He’s given more agency here, especially in the middle timeline. It was enlightening and surprising to find out that he helped pull Tom out of his alcoholism five years previous. It makes Roland a more complex character especially in light of his brutal actions on last week’s episode.

Additionally, we get a sense of how much he feels Wayne was wronged (“You fucked a good detective”) and he exhibits a genuine sense of regret at the loss of Wayne as a partner and friend. Their partnership is much more amiable than Rust and Marty’s from season one and I like that. The banter between Ali and Dorff (“nine years later and you’re still talking about your dick”) is sharp, witty, and natural.

The 1990 timeline becomes much more front and center for this third episode. You see how much the Purcell case has affected Wayne’s mentality. When he loses his daughter for a brief time in Wal-Mart it goes way beyond the normal parental anxiety at an event like that. Julie’s disappearance clearly exacerbates Wayne’s fear of losing his children even ten years later. It’s a case that haunts him, and one that affects his relationships. On the one hand he’s obsessed with the case enough that he stakes out the pharmacy with Amelia, yet turns around and yells at her not to bring up the case when she delves deeper. It’s a true dichotomy.

Speaking of Amelia, I’m absolutely loving Ejogo’s performance in this season. She’s got much more agency than just a wife and mother. Despite the fact that she’s written the definitive book on the Purcell case, Amelia is much less obsessed with this case than Wayne. For God’s sake during the stakeout, she suggests that they retreat to a hotel, get drunk, and have sex all night. And Wayne initially TURNS HER DOWN. Crazy. I definitely want to know more about her motivations though. Why does she want to write and what was her life like in the early 70s when she was, as Amelia puts it, “in the scene”?

Yet despite Wayne’s misgivings, he jumps at the chance to rejoin Roland after Roland reveals a new task force has been opened to re-investigate the Purcell case. Clearly, Roland’s career has had a much better trajectory than Wayne. Wayne even implies that it has in part to do with Roland being white, something which Roland resents. Apparently, Roland also got shot during the original go around on the Purcell case, something that hasn’t been revealed in the 1980 storyline. Another tantalizing nugget of mystery that’s yet to unfold.

Even though I appreciate the three timeline structure of this season, the 2015 storyline for this season of True Detective isn’t all that compelling at this point. Right now it’s essentially Wayne’s memory loss is worsening and the interviews for “True Criminal” are taking place. However, we do get quite a harrowing moment between Wayne and his dead wife’s (ghost? figment of imagination?) that is dynamite. She seems to imply that he’s covering something up, that it’s not just his failing memory. If so what? And why? 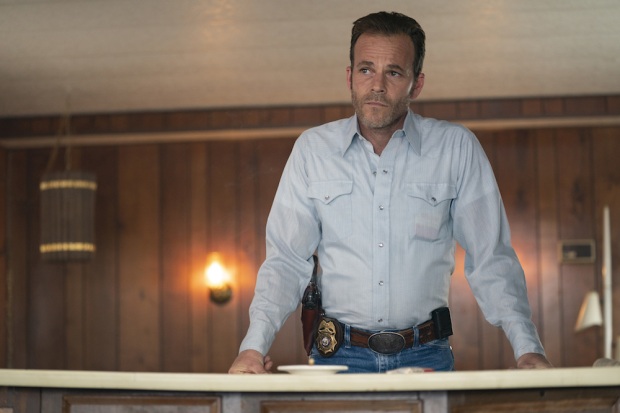 Although the 1990 segment features more prominently in “The Big Never,” the 1980 timeline is still where it’s at. It appears as though Julie and Will were living a secret life, playing Dungeons and Dragons with unknown people, possibly some adults. I’m continually impressed by Wayne’s tracking skills. When he discovers the dice and the bloody rocks, there’s a look of exaltation and horror that only Ali could deliver. Wayne truly is a hunter. Yet again more questions abound. Who was driving the supposed brown sedan several witnesses saw? Is the man in the house near where the bloody rocks are found somehow involved? Additionally, Will’s body was left in the exact same pose as his First Communion picture. This suggests that the killer knew Will more intimately than once thought, maybe even attended his church. And apparently now there’s a black man with a scar that may be involved. With every answer it seems three more questions arise. And I LOVE IT. The amount of intrigue in this season clearly knows no bounds.

I’d be remiss if I didn’t mention what happens to Brett Woodard in this episode. The Native American war vet is set upon by locals who proceed to beat the shit out of him. This prompts him to retreat to his house where he retrieves…something…from a blue tarp. Possibly a weapon? Could he be going after those self-same attackers in next week’s episode? Signs point to yes. The fact that the locals attacked him is indicative of how truly scared the town and its people have become. I feel like the violence is about to escalate and in the worst way possible.

The season has its hooks in me so far and the deft mix of mystery with compelling characters has me chomping at the bit for more.