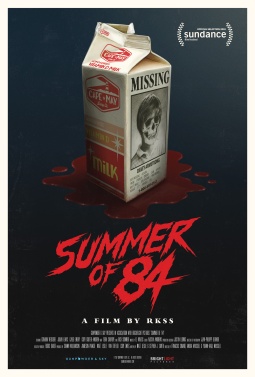 Plot: A group of friends believe their neighbor may be a serial killer

It has been said that nostalgia has been our big, fluffy, warm blanket in these dark and cold times. It has also been said that the success of both Stranger Things and the new It has made it really trendy for cinema to go for that retro ’80s horror-adventure style, which is just my nice way of repeating a lot of pop culture essayists attempts to call out “rip offs.” What is just as likely is that the generation who grew up on this kind of content are now content creators themselves. Summer of 84, at least, deserves the benefit of the doubt considering it is from the same film-making team behind Turbo Kid, an excessively ’80s-style-heavy movie that predates both Stranger Things and It.

That said, being nostalgic is not necessarily a good thing. Summer of 84 goes out of it way to seem like it was written in the 80s, specifically in the shitty behavior of the teen kids. Their word choice for busting each other’s balls is cringey by today’s standards (lots of homophobia), and the “boys will be boys” excuse for being a peeping tom on your neighbor is very tired. It is all very distracting from the actual story.

That story doesn’t set out to reinvent the wheel, but it still does a good job of capturing that classic style. It is Rear Window by way of Home Alone and The Goonies. It centers around four buddies who spend their time looking at the same porn magazine they found over and over or playing manhunt, an aptly-named, neighborhood-wide game of night tag. The milk carton campaign to help find missing kids is in its infancy, and it is starting to make the neighborhood feel less safe. People are scared to go out at night. However, there is good reason to feel less safe since there is an actual serial killer picking off kids, and he just got sick of not being noticed. He sent a Zodiac Killer style letter to the local newspaper, and in true over-the-top 80s kid fashion, these kids have decided to take justice into their own hands. 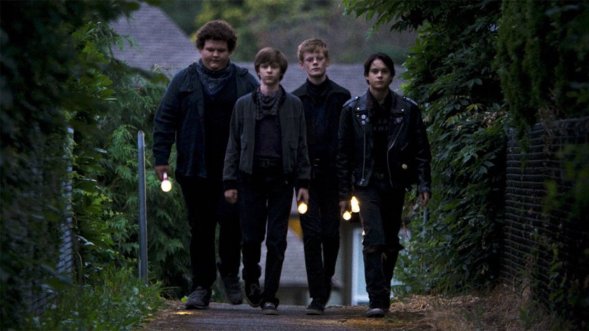 To its credit, it has a much steeper sense of dread and stakes than those earlier influences. Most of the levity is based on their personal interactions, while most of the situational bits are used for jump-scares instead of punchlines. As the alleged killer, Mad Men’s Rich Somner has a real Clark Kent wholesomeness that straddles the line between genuine and suspicious. It never milks its “Are they right?” mystery any more than it has to, impressively switching gears to visceral danger when the main mystery hits a logical conclusion.

It’s greatest feat is how it caps everything off. They take a potentially lazy voiceover to wrap up the murders, but with some strategic visuals, it uses an inherent ambiguity of the words to refer to a number of issues that are just starting to plague the suburbs, like broken families and bank foreclosures. So, even though Summer of 84 relies too heavily on its nostalgia factor, they put a new hat on it in its final moments that deserves some love.