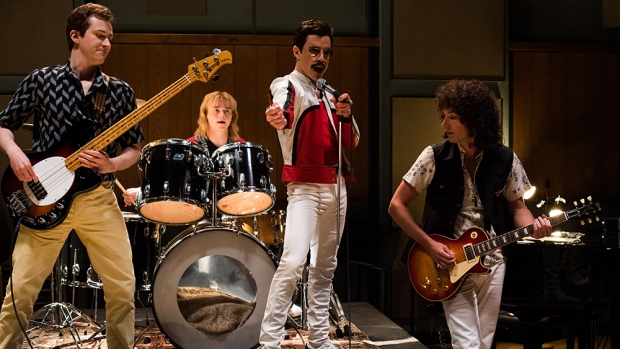 Plot: Director Bryan Singer’s music biopic traces the rise of the rock group Queen and front-man Freddie Mercury (Rami Malek) from their humble beginnings in 1970 through to their amazing performance at Wembley Stadium for Live Aid in 1985.

Review: When it comes to the music of “Queen” I’m what the kids would refer to as a “basic bitch.” I really had no clue who they were until 1992 when I saw Wayne’s World for the first time. Like millions of kids, I was entranced by the lip sync performance of Wayne, Garth, and friends as the group rocked out to the operatic lyrics of “Bohemian Rhapsody.” I immediately went out and bought the band’s Greatest Hits album to discover that they were so much more than the song this biopic is named for.

Despite becoming an instant fan, I never really knew much about the band until later in life. It’s insane to think that with a band as storied as “Queen” and a frontman as outrageous as Freddie Mercury, that it would take twenty-seven years after Mercury’s death to get a proper biopic. The film had a troubled past for sure, everything from Sacha Baron Cohen dropping out, to on set screaming matches during production, to Bryan Singer’s sexual misconduct allegations. In spite of all this, Bohemian Rhapsody crushed at the box office earning almost $900 million world-wide and garnered five Oscar nominations, winning four.

Yet with such dual elements of acrimony and acclaim, the real question of course is, is the movie any good?

While at times entertaining, Bohemian Rhapsody unfortunately never rises above the level of mediocrity. It’s a workmanlike and perfectly competent music biopic that celebrates the music of “Queen” more than anything else. All the familiar beats are there from “Queen’s” dramatic rise to success, to Mercury’s excesses, weasley hangers-on, a break-up, and ultimately a reunion at Live Aid. Unfortunately, it’s nothing audiences haven’t already seen before and at times feels rather trite and familiar. In fact Bohemian Rhapsody often feels like the Cliff’s Notes version of the band.

Bohemian Rhapsody in no way constitutes a deep dive into the life of Freddie Mercury either. If you’re looking for the “Queen” version of Oliver Stone’s The Doors you’ll be sadly disappointed. Mercury’s bi-sexuality is not outright avoided, however it’s never given the depth or nuance of say Alan Turing in The Imitation Game. Mercury’s long running relationship with Jim Hutton (Aaron McCusker) for example is glossed over almost completely. And while Mercury’s relationship with long-time best friend Mary Austin (Lucy Boynton) plays a central role in the film, there’s not much depth or backstory. To be fair, Boynton does well with what she’s given proving that her turn in Sing Street was no fluke.

From a technical standpoint, Bohemian Rhapsody visually appeals with a color palette that matches nicely with “Queen’s” outlandish style. I also thought showing the critical reactions to the song “Bohemian Rhapsody” against the backdrop of its commercial appeal was a nice touch. In addition, the last twenty minutes of the film which recreates “Queen’s” famous Live Aid performance is nothing less than spectacular. However, John Ottman’s editing is scattershot at best with his musical score not up to par with the signature music of the band.

What saves Bohemian Rhapsody from being a sub-par music biopic is the chemistry of the band actors. Gwilym Lee, Ben Hardy, and Joe Mazzello as Brian May, Roger Taylor, and John Deacon all shine. You believe the family aspect of “Queen” and how despite a tendency to drive each other crazy, it was all in the name of pushing themselves to make the best music possible. It’s too bad the dynamic gets lost in tired musical biopic tropes that didn’t actually happen like the band breaking up (they never really did historically) or Mercury telling the band he had AIDS just before Live Aid. (Mercury didn’t find out he had the disease until two years after the concert.)

As for Malek’s performance it’s as good as advertised. This is very much Mercury’s journey and it’s a sight to behold Malek transform form the introverted Farrokh Bulsara schlepping luggage at Heathrow to the kinetic and vibrant rockstar Freddie Mercury. There’s an evolution of the character that’s as visible and real as the actor himself. Malek lends a vulnerability and pathos to the performance that connects on a very human level. Rami Malek definitely plays up the misfit aspect of Mercury and by default the band. “Queen” and Freddie Mercury are every misfit’s fantasy writ large and it works convincingly. My only knock against Malek’s performance is he clearly lip syncs through the entire film which at times took me out of the movie.

Bohemian Rhapsody brings nothing new or Earth shattering to the music biopic and leans too heavily on tired tropes. However, Rami Malek thankfully anchors the film with a dynamite performance. While the movie doesn’t break new ground it’s still a celebration of the music of one of rock’s greatest bands and manages to be just entertaining enough to be worth a watch.