Plot: Billy Batson (Asher Angel) has been looking for his Mom for years. Bounced around from foster home to foster home, Billy finds himself thrust into a new group home run by Victor and Rosa Vazquez. After defending his foster-brother Freddy (Jack Dylan Grazer) from bullies, Asher finds himself summoned by the wizard Shazam who imbues Billy with his powers to help fight against the Seven Deadly Sins, lead by the villainous Dr. Thaddeus Sivana (Mark Strong).

Review: Shazam! the latest film from the DCEU, is a film where seemingly all the elements are there for a successful movie. There’s a dynamic young cast led by Asher Angel and Jack Dylan Grazer, an up and coming director in David F. Sandberg, a heartfelt and funny script from Henry Gayden, and an excellent performance from Zachary Levi. Obviously the buzz on this film has been fantastic with the film earning an “A” Cinemascore and the sequel already in development. However, in spite of all these things, Shazam! is a film that, for whatever reason, just didn’t land with me.

This isn’t to say that Shazam! is a bad film. Far from it. There’s so many comic book films out now that a level of superhero fatigue (something I’m not entirely sold on) was bound to set in. There’s an inevitable “been there done that” syndrome when it comes to comic book films, particularly origin stories. And while many of those beats are present in Shazam!, the film in some ways is a breath of fresh air.

Sandberg’s film has been billed as a Big meets Superman movie and that comparison is right on the nose, complete with an homage to the Tom Hanks film in the third act. There’s a lightheartedness and a sincerity that pervades Shazam! This fact shines through repeatedly especially when Billy initially gets his powers and he and Freddie (in a scene stealing performance from Grazer) test out Billy’s powers and put the results on the Internet. It’s something that a fourteen year old living in 2019 would ABSOLUTELY do. Another scene where the duo try beer for the first time comes off so authentic that I couldn’t help but laugh. 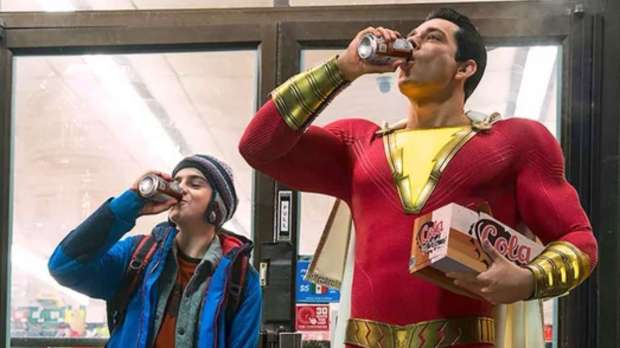 Indeed laughs are a large component of Gayden’s script, and his screenplay plays more like a comedy than an actual superhero film, whether it’s Shazam blowing up a person’s cell phone while trying to charge it or straining to hear Sivana’s villainous speech towards the end of the movie. None of the jokes ever feel forced or awkward. There’s also a lot of heart in Gayden’s script especially regarding the concept of family, particularly the concept that families come in a variety of forms. Honestly, some of the best parts of the film revolve around Billy’s foster family including a great scene where Billy’s foster-sister Darla (Faithe Herman) discovers Billy’s true identity.

Where Shazam! occasionally falls flat is when superhero elements come into play. The concept of a friend (Freddie) having to remind Billy that with great power comes great responsibility has been done before, and although Billy’s evolution and arc feels earned it’s also very familiar. Additionally, the run time of two hours and twelve minutes is a little bloated for my taste. The studio could have shaved a good twenty minutes off of the film. We also get the inevitable “Big Bad” showdown in the third act, although I will say that a twist involving Billy’s foster brothers and sisters and the fact that it is set at a Winter Carnival were inspired choices.

Speaking of the “Big Bad,” I wasn’t particularly enamored with Mark Strong’s performance. His Sivana feels very pat and formulaic. Sivana’s motivation for being evil is essentially because he wasn’t loved enough by his father. There’s a level of menace and maliciousness that’s severely lacking from the performance and it occasionally comes off hokey. Additionally, the Seven Deadly Sins feel a little too cartoony at times, although too his credit Sandberg does an excellent job of introducing horror elements into Shazam! not surprising since he’s had success in that genre with Lights Out and Annabelle: Creation.

I’d be remiss however if I didn’t mention the performance of Zachary Levi. He’s pitch perfect in the role of Shazam. The whole movie hinges on whether or not you can accept the idea of a child trapped in a superhero’s body and it works because of Levi. Levi’s performance radiates warmth, humor, and heart. It’s a role Levi was born to play and a casting marriage of character and actor on par with Robert Downey Jr. in Iron Man or Christopher Reeve in Superman. I can’t see anyone else playing Shazam and I hope we get to see Levi play this role for years to come.

From a DC fan perspective, I like the direction the DCEU is heading. Aquaman was a pleasant surprise and Shazam! is sure to be a crowd pleaser that will keep the momentum going. As long as Warner Bros and the DCEU continue to focus on making one quality film at a time I think they’re going to be in good shape. So while I didn’t love Shazam! there’s certainly a lot to like about it and it’s a movie that I may enjoy more upon subsequent viewings.