Plot: A conclusion to the wildly popular HBO television series that ran from 2004-2006, the Deadwood film gathers the principal characters back to the titular town in 1889 for the confirmation of South Dakota as the 40th state. When an old enemy kills a beloved town member and threatens the town, a select few citizens band together to protect their home.

Review: OK first off if you’ve never seen HBO’s Deadwood you have two options: either stop reading now and wait for my next witty and insightful article, or go watch the whole thirty-six episode masterpiece and come back when you’re done.

Still with me? Alright! Well as the poster says welcome the fuck back!

Fifteen years ago, HBO had yet to reach the lofty television heights it now sits atop of as top dog of the cable networks. Sure there was Oz, The Sopranos, and Rome, but the cable network didn’t quite dominate the landscape as it does today. Enter Deadwood, a gritty and dark Western television show that billed itself as “Shakespeare in the mud.” The look and feel of the show was captivating and the dialogue possessed its own unique cadence and rhythm that was part Bard and part swear fest. (Never has the term “cocksucker” been used more often and eloquently before or since.) Most notable however, were the characters themselves, whether it was the noble and upstanding Marshall Seth Bullock (Timothy Olyphant), the fiery whore Trixie (Paula Malcolmson), the cantankerous Calamity Jane (Robin Weigert), and my personal favorite Al Swearengen (Ian McShane) the villainous owner of the Gem Saloon.

As groundbreaking and entertaining as Deadwood was, perhaps the most ignominious thing about the show was how it ended. With no fanfare, the show just abruptly concluded with no real resolution. Creator and writer David Milch had planned to wrap the program up with a ten episode fourth season but due to budget costs, it was not be. For years, rumors abounded of a possible Deadwood film, something that would bring an appropriate conclusion to the beloved show. Many believed it to be impossible. Most of the principals had scattered to the four winds and gone on to other projects. Yet somehow, some way, HBO was able to gather everyone back for one final walk down the mud covered streets.

And boy was the whiskey worth the shot. 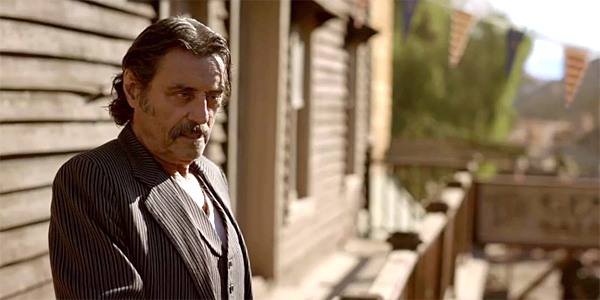 The Deadwood movie works like a well oiled .45. Dark, visceral, and completely enthralling, creator and writer David Milch’s return to the seminal show is everything I hoped it would be and more. A slow burn punctuated by only a few gunfights, Deadwood chooses rightfully to focus mainly on a few characters we fans have come to know and love.

Resident lawman Seth Bullock has continued as Marshall of Deadwood and co-owner of a well-established hotel and expanded his tribe with wife Martha (Anna Gunn) to the tune of three children. Sol Star (John Hawkes) his partner is himself about to become a father and husband to ex-whore Trixie who is just as irascible and prone to sharp-tongued eloquence as ever. And of course there is the one and only Al Swearengen owner and proprietor of The Gem Saloon. Although he’s lost some of his power and shows signs of ill health, it’s not enough to keep this cocksucker down.

All of the aforementioned actors, as well as the rest of Deadwood‘s supporting characters, fall back into their roles as if the thirteen years between season three’s end and this film never happened. Olyphant sinks his teeth back into the role of Bullock. If anything Bullock’s become even more self-righteous and in some ways thinks himself above the law. As he says to Al at one point, “My job isn’t to follow the law, it’s to interpret it. And enforce it.” And Bullock puts the word “force” in “enforce” a number of times in this film much to the delight of this Deadwood fan. Yet there’s also some new found vulnerability to the character I wasn’t expecting.

McShane also resurrects the character of Al Swearengen with equal success. Though suffering from a liver malady due to drink, he’s as stubborn and malicious as ever especially when it comes to his enemies. Yet in some ways he’s mellowed, particularly in light of what happens to his former employee Trixie. Unfortunately due to time constraints some other characters like E.B. Farnum (William Sanderson) and A.W. Merrick (Jeffery Jones) get short shrift. Yet fans of the cantankerous Doc Cochran (Brad Dourif) and the hilariously vulgar and endearing Calamity Jane will be more than satisfied.

In a similar vein the town of Deadwood itself has barely changed. The streets are just as muddy and the desire for quick wealth just as prevalent. In fact the only thing to mark the passage of time is progress. Progress in the name of telephone lines and in the person of one George Hearst (Gerald McRaney).

Yes it stands to reason that if you’re going to bring Deadwood back, you might as well bring back its greatest villain. Now a junior Senator from California, the ruthless businessman still has more than a few fiscal interests in Deadwood, South Dakota. He’s stunned to find that the whore who shot him, Trixie, is still alive, having believed her dead for over ten years due in part to a clever ruse by Al and his ilk. Indeed the public dressing down she gives him is just as stunning as it is eloquent. Hearst never forgives anyone who wrongs him nor those like Charlie Utter (Dayton Callie) who stand in the way of him acquiring more land for the previously mentioned telephone poles. Before long Hearst is at loggerheads with Bullock and the town as a whole. And for the sake of not ruining anymore of Milch’s fantastic script I’ll just leave it right there.

Despite a stellar script from Milch, Deadwood would be dead in the water without the right director at the helm. Thankfully, Deadwood television series veteran Daniel Minahan returns to steer this ship into port. Minahan understands something about Deadwood that not everyone who’s directed previous episodes has. Namely that the town of Deadwood itself is very much a character in the show. Deadwood possesses a distinctly layered sensibility about it. The town is just as likely to choke you in the mud as it is to embrace you. The soul of Deadwood remains steadfast, loyal, and vicious as the closing minutes of the movie shows. Kudos to Minahan for capturing that soul and for the producers of Deadwood for bringing the rollicking town back to life.

In the end the Deadwood movie proves to be as exciting, dramatic, and entertaining as the original show. It’s an appropriate sendoff for one of the greatest shows of all-time and an excellent Western in its own right. Whether you’re a longtime fan of the program or someone who’s just discovered it, you’ll be more than pleased.