Directed by William A. Wellman

The Scene: Despite the objections of his war hero brother, Tom Powers (James Cagney) is growing quite accustomed to the gangster lifestyle. Of course with the money and power associated with the mobster lifestyle come the women. In this case the woman is Kitty (played by an uncredited Mae Clark) who fails to realize Tom rather likes the money, power, and fear 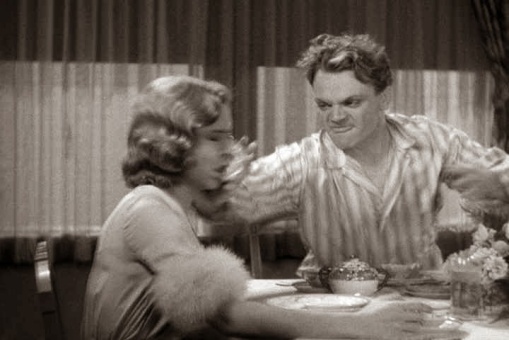 aspects of climbing the criminal ladder and women are merely disposable fun. While having breakfast at Kitty’s place, Tom feels the need to enjoy a morning beer, but is angered to find his new gal pal is not too crazy about drinking before noon and tells him as such. The poor young woman soon learns the tough lesson about angering an unpredictable violent sociopath. After a bit of arguing, where he proclaims “I didn’t ask for any lip. I ask for a drink”, Powers picks up the grapefruit she is eating and coldly smashes it into her face. Staring her down with pure disdain, the gangster leaves without a second thought.

The Deconstruction: Few in movie history could play a villain as well as James Cagney, and the Public Enemy is the film which put him in the limelight. Like his contemporaries; George Raft, Humphrey Bogart, and Edward G. Robinson, Cagney was an icon of the Depression Era gangster films. What set him apart from the others, was the maliciousness tinged with insanity that he brought to his characters. Cagney’s gangsters were manic, ruthless, terrifying, and unpredictable. Funnily enough, the actor was original slated to play the role of Tom’s sidekick, luckily director William Wellman saw the potential in Cagney and moved him into the lead setting him on the path to stardom. In this classic scene, we see that his cruelty did not require a machine gun, bombs, or even one of his trademark suits all he needed was a piece of fruit. Wellman was inadvertently inspired by his wife for this scene, as he claimed when they argued she would get to the point where she would just quit responding to him. This infuriated the filmmaker to the point he wanted to hit her in the face with one of the grapefruits she ate for breakfast. This moment was not included in the script, and according to Mae Clarke nobody told her about it. This led a genuine shocked reaction, when Cagney callously smashes the citrusy fruit into her face (though according to Jimmy Cagney he warned her about it on the day of shooting). Nevertheless being in such an iconic scene in the Public Enemy as well as playing the female lead in Frankenstein, made 1931 a banner year for the actress. Though this scene plays out darkly funny today (but still so very enjoyable), this casual violence towards a woman was truly shocking to the audiences of that era and it erased any doubt as to how evil Tom Powers was.

Best Bit: James Cagney’s infamous glare adds that extra bit to put this scene over the top. The intensity the actor was always able to convey with his crazed look in his eyes was one of his trademarks and in this scene that comes across perfectly. With a single expression at the end of this scene he pretty much tells Mae Clarke she is beneath him as he coldly leaves her behind.