Retro Review: ‘Alone in the Dark’

The early 1980’s proved to be an interesting time for horror, the gritty exploitation films

of the 70’s still had a powerful legacy while the slasher genre was only growing in popularity. It was inevitable the two styles would collide with each other as they did in the 1982 cult favorite Alone in the Dark.

At a rural mental health facility, Dr. Dan Potter has joined the staff of the prominent Dr. Leo Bain replacing a doctor who was a particular favorite among the troubled patients. Bain’s methods are famously unconventional, he is lenient with his patients who he refers to as “voyagers” and relies on a high tech security system rather than walls and fences to keep the peace. To really drive home the point he smokes a literal peace pipe throughout the movie. Though things may not be as placid as he believes, patients of the third floor; the pyromaniac “Preacher”, creepy pedophile “Fatty”, a psycho who fears showing his face “the Bleeder”, and their PTSD stricken ringleader Frank, believe Dr. Bain has killed their doctor and replaced them with this new guy. Needless to say they immediately do not like Dr. Potter.  It is agreed upon that they have earned righteous vengeance, and following a complex scheme they cause a local blackout which allows them to escape. They find the home

of Dr. Potter and the criminally insane escapees lay siege to the doctor and his family killing anyone who may try to stop them. If they want to survive the night, the entire family will have to resort to a level of violence they never thought they could reach.

Make no mistake Alone in the Dark is a strange horror flick seemingly made to be a cult classic. What makes it standout is the surprisingly talented ensemble cast consisting of veteran actors; Donald Pleasence, Jack Palance, and Martin Landau. Of course there is 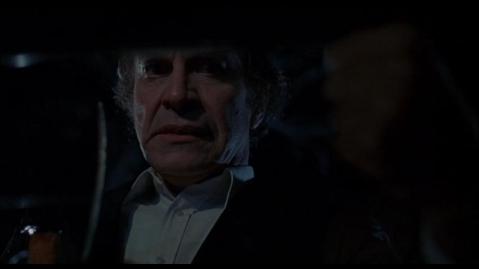 also the ironic casting of “Howling Mad” Murdock himself Dwight Schultz as the lead. In all honesty there is something fun about an esteemed Oscar winner like Landau flinging around a burning jacket while screaming Bible verses with a crazed look in his eyes. Naturally a cast this good knows how to perfectly balance the horror with the black humor of this film perfectly. Aside from the maniacs, the Potter family who is the target of the killers are all very likable and charming so it is easy to root for them in the face of the horror they are experiencing.

The fact that the plot of the movie relies on power being knocked out, means the entire film has an added layer of moodiness which it wears proudly. Of course the mental hospital features a bleak look to truly drive the isolated nature of the facility. Even during the stretches of the film where the family is fearfully hunkered down in the home the lighting, or lack thereof, truly adds another dimension to everything. In fact the only setpiece which is not dark in dreary is the punk rock club where New York-based Sick F*cks are playing.

Alone in the Dark is a truly enjoyable horror flick of the 80’s which has earned a cult following. It is a solid, if not strange mix of horror and black humor which is bound to appeal to any fan of strange flicks. True it’s portrayal of those dealing with mental illness is far from sensitive, but it makes for a very entertaining horror film because of it. The movie even featured a hockey-masked killer a full year before Jason donned his iconic mask. With a cast of some of the best character actors to ever grace the silver screen Alone in the Dark is truly an enjoyable and entertaining horror flick.

← Book Review: The Siren and the Specter
Classic Scene: Up to 11 →