like; the Goonies, Flight of the Navigator, Gremlins and the Monster Squad still hold a place in the hearts of now grown movie lovers. And then there’s this movie. Inspired by the satirical Topps trading cards, the Garbage Pail Kids Movie was released in 1987 and has deservedly gone down in movie history as one of the worst flicks ever made.

In an antique shop run by the eccentric Captain Manzini (who is also a magician of some kind) there is a garbage pail from outer space, which he refuses to open. Manzini’s young employee, Dodger, however is inevitably curious as to what the old adventurer holds in “Pandora’s Pail”. While trying to defend himself from bullies, Dodger accidentally knocks open the infamous Garbage Pail releasing the monstrous “children” within it. The raucous and disgusting Garbage Pail Kids mean well with names like; Ali Gator, Greaser Greg, Valerie Vomit, and Foul Phil. And of course these creatures have a talent for making gaudy terrible clothes, and Dodger’s new duds attract the attention of the girl he is crushing on. As happens in these films the newly released Kids escape into the city and wreak havoc wherever they go. At the center of it all is the State Home for the Ugly where people deemed too ugly for society like; Abraham Lincoln and Santa Claus are imprisoned. This Home takes the Garbage Pail Kids into custody forcing Dodger and Manzini to free them. Once they are freed, the Garbage Pail Kids are free to ruin a pretentious fashion show as 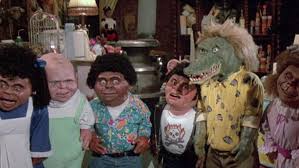 their grand stand. If this makes it sound like the Garbage Pail Kids Movie has way too much going on and much of it makes no sense, then you are absolutely correct. On that same note you would be very incorrect in assuming the film would move at a rushed pace in order to get through all of this.

First and foremost let us say the Garbage Pail Kids Movie prides itself on it’s revolting subject matter. Sure there is an attempted message the looks do not matter or something, but that message seems to be thrown in as an afterthought to give the movie a legitimacy it has not earned. This message could work if any character in this film had any shred of warmth or charm or likability, but they do not. This extends beyond the Garbage Pail Kids and into the human characters as well, who are all given very real and normal names like; Dodger, Tangerine, and Juice.

From a technical standpoint I do have to give props to the people behind the scenes who created the costumes worn by the actors behind the characters. Each of them is perfectly grotesque and horrifying and considering that is what they were going for, mission accomplished. Too bad nobody else making this movie took that much care in their work, as the Garbage Pail Kids tends to meander aimlessly down several plot threads. For large portions of the flick nothing of consequence even happens. At one point we have an awful (but strangely catchy) musical number, so one would be forgiven for expecting more tunes, but for some reason this is the only one making it that much more jarring.

It is hard to tell who this movie was intended for. The childishness and immaturity is not going to draw in adults. And due to the slow meandering pace it is not going to appeal to kids either. Perhaps given how bad it is, we should consider ourselves lucky this flick was not actually meant for anyone. It is not entertaining enough to even be a good/bad film like Plan 9 from Outer Space or the Miami Connection. With so few positives going for it, the Garbage Pail Kids has truly earned it’s spot among the worst movies ever made.