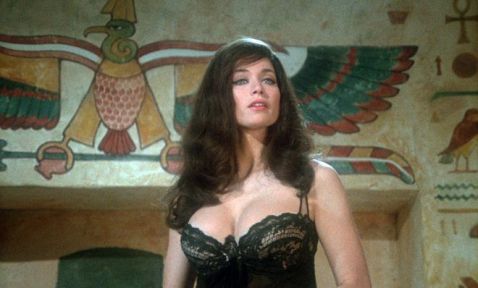 Hammer Studios, was seeing diminishing returns from a worn out audience. The decision was made to conclude the Mummy flicks, and to do so with a bang. By now audiences were familiar with the formula of the love-struck undead Egyptian emerging wrapped in bandages to terrorize the populace. They had seen it in: The Mummy, Curse of the Mummy’s Tomb, and the Mummy’s Shroud. So in 1971, Blood from the Mummy’s Tomb drew inspiration from the Bram Stoker story, Jewel of the Seven Stars, and is regarded by many to be arguably Hammer’s best Mummy flick.

Years ago, an expedition to Egypt led by Professor Julian Fuchs, discovered the lost tomb of the Egyptian ruler Tera. The archeologist returns back to England with the severed hand of the queen as well as Tera’s ruby jewels. Fast forward several years later and Professor Fuchs presents his daughter, Margaret with a familiar red ring for her birthday. At night, Margaret now finds herself plagued by nightmares where she sees the expedition her father led and feels the grasp of Tera wrapping around her. As she and her boyfriend investigate the truth behind what is going on, all of her father’s colleagues are turning up dead. It becomes clear that Tera is taking control of the young woman and 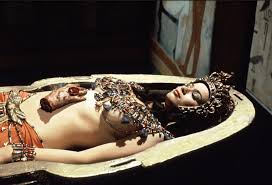 is looking for revenge.

Despite being one of the best films from the Hammer House of Horrors, Blood from the Mummy’s Tomb had an incredibly tumultuous production. Many cinephiles even have a running joke that the making of this film was itself under an ancient curse.  A fatal heart attack claimed the life of director Seth Holt during the making of the film, leading Michael Carreras to have to step into the director’s chair to finish the film. Despite being overseen by two directors the end product flows seamlessly and you would be hard pressed to see the two different styles. Behind the camera, was not the only aspect of Blood where trouble hit, intended leading man Peter Cushing was forced to leave the lead role after only a day of filming due to health reasons. Incidentally the departure of the Hammer icon from the cast, allowed a rare placement of the spotlight on actress Valerie Leon, the “Mummy” of the picture. Though Andrew Keir may have received top billing, Leon absolutely made the movie with her performance. Whether she was the vulnerable young daughter of an archaeologist or the terrifying ancient Egyptian Queen, Valerie Leon had an onscreen confidence which shined through. While most of the other roles in her career saw the actress, shoved in the role of a sexpot, Blood from the Mummy’s Tomb allowed Leon to delve into the talent she displayed during her early years on the stage. It is almost a shame Hammer quit making mummy films after 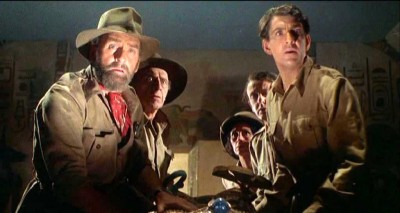 this, as she would have been an excellent lead in any future installments.

When it was released Blood from the Mummy’s Tomb was put as part of a double feature with fellow Hammer Horror, Dr. Jekyll & Sister Hyde (a far better movie than it’s sensationalized title implies). This latest mummy film actually surprised quite a few people as the threat did not come from a decrepit creature covered in gauze stumbling around, but rather an attractive young woman possessed by an ancient spirit. This subversion of expectations has won praise even from non-horror fans over the ensuing decades. Far too often this movie is unjustly written off as yet another flick from Hammer’s latter years which focused more on voluptuous women and shocking gore than quality filmmaking (but to be fair plenty of that is present), but Blood from the Mummy’s Tomb is so much more. For fans of horror this is an underrated classic well worth watching.