One of the positive consequences of the COVID-19 pandemic, has been the ability for people to explore television shows and films they never got around to see. This of course comes with the caveat that one actually has time to do so. Depending on certain circumstances (i.e. children or lack thereof and the essential nature of your job) this may or may not be the case. Nevertheless, millions of people who didn’t have free time before now have the opportunity to watch every episode of The Wire or the entire Harry Potter series.

With that in mind I thought it was high time to explore some gaps in my film and television lexicon. So of course I completely scrapped that idea and decided to re-watch every one of the thirteen Star Trek films that have been released since 1979. We continue on our journey down the warp lane with the best film of the TNG movies – Star Trek: First Contact.

Plot: The crew of the newly commissioned Enterprise-E has settled into their role as flagship of the Federation. However, when the Borg attack Earth, Captain Picard (Patrick Stewart) defies orders from Starfleet and rushes to the conflict. With the battle all but won, the Borg in a last ditch effort travel back in time to prevent Earth’s first contact with an alien species. The intrepid crew follows the Borg. Together they must ensure that the creator of warp drive Zefram Cochrane (James Cromwell) takes his historical first flight and prevent the Borg from destroying the future of humanity.

Review: With Star Trek: Generations receiving mixed reviews, it was essential that First Contact stick the landing in order to separate itself from the OG Trek films. Thankfully, First Contact not only managed to do just that, but went above and beyond expectations – including my own. 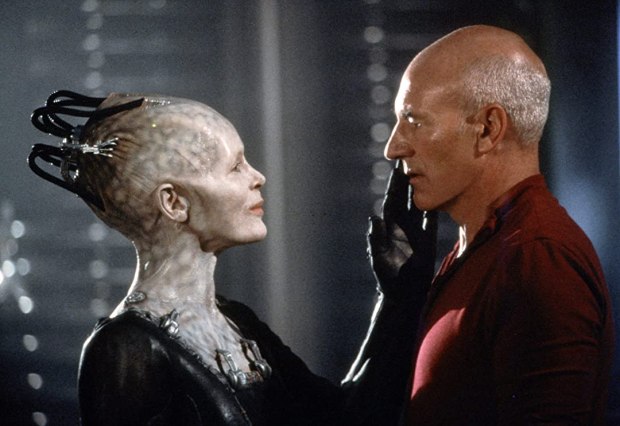 While many Star Trek fans revel in the episodes that are set firmly in the 23rd or 24th centuries, I was always fascinated by the tales involving time travel. Indeed episodes such as “City On The Edge of Forever” and “Cause and Effect” consistently show up on top ten lists. Hell The Voyage Home ranks as one of the best Star Trek films and that involved whales for God’s sake!

Not surprisingly, First Contact works on a story level because of the time travel element and the inclusion of one of the Trek universe’s most famous characters – Zefram Cochrane. Fans of the franchise had known of Zefram Cochrane for years, however it was great to see him fully realized on screen. Rather than the idealized historical figure most 24th century citizens perceived him to be, writers Moore and Braga created a nuanced and very flawed character. A borderline alcoholic who’s more interested in dollar signs than historical recognition, James Cromwell delivers a layered and hilarious performance. Whether he’s plying Troi with tequila or doubting his own place in the history of humanity, Cromwell’s Cochrane never disappoints and always entertains.

The decision to make the Borg the primary villain dovetailed perfectly with Trek lore and proved essential to the success of the film. Arguably Trek‘s best Big Bad, what makes First Contact much more interesting is how it flips what we know about the Borg completely on its head. Whereas before audiences knew the enemy as a faceless collective devoid of compassion and mercy (and they very much still are) the revelation that the Borg collective was run by a Borg queen (Alice Krige) made for a much more compelling and vibrant story. Indeed her interaction with Data and his desire to be human made for an interesting sub-plot, especially considering Data ultimately foils the Borg queen’s plans.

Of paramount and overriding importance however is Patrick Stewart’s brilliant turn as Captain Jean-Luc Picard. Arguably his best performance of the entire film series, Picard in some was elevates to the status of action hero, something unexpected but not unwelcome. However, Stewart is able to bring a requisite amount of gravitas to the film. We also get the sense of a character desperately struggling with past trauma. Picard’s time with the Borg creates a single-mindedness, a desire to wipe out the entire Borg collective, akin to Captain Ahab in Moby Dick. Revenge, rather than the safety of his crew takes precedence as evidenced by an argument with Worf (Michael Dorn) and the infamous, “The line must be drawn here!” scene. It takes Cochrane’s assistant Lily – played magnificently by Alfre Woodard – to bring him back to reality. It’s a scathing examination of how unchecked and unresolved trauma can take over our lives.

Jonathan Frakes proves adept in the director’s chair, in his first major motion picture. Frakes keeps First Contact on a quick pace that never overstays its welcome. He’s able to balance intense action with quieter and more dramatic moments. Jonathan Frakes clearly gets Star Trek in a way few do, mainly because he played the role of William T. Riker for years. He understand its cultural significance and impact with fans in such a way that it makes me wish he directed more Star Trek films. Nevertheless, if this was Frakes sole foray into directing Star Trek (which it wasn’t), the result was an unequivocal homerun.

Star Trek: First Contact proves to be a talented showcase for the entire TNG crew, a rousing adventure mixed with an excellent message about trauma and legacy, and quite simply one of the best film entries in the series. I mean it’s hard to not love this movie.

As the Borg would say, “Resistance is futile.”

Next up Star Trek: Insurrection! 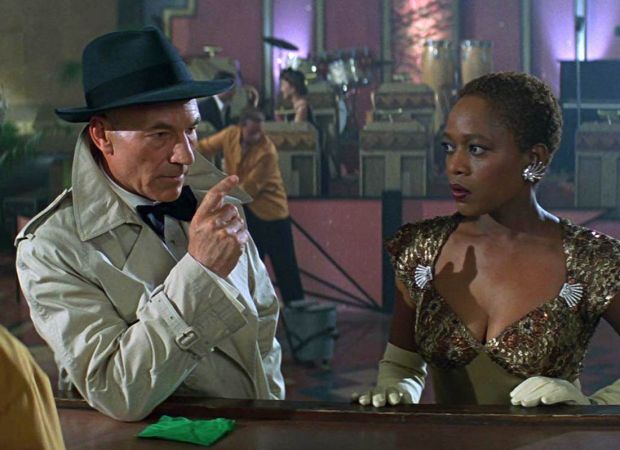 ← Movie Review: ‘Nobody Sleeps in the Woods Tonight’
Noirvember Review: ‘The Woman in the Window’ →