Time for the fifth – and final – collection of reviews of the William Hartnell episodes of Doctor Who. At this point we start to see larger gaps in the series as we get to the parts of the shows history that was most affected by the BBC culling their stocks. Whenever needed we’ll try and fill in the gaps. And now…

Quite a cool set of episodes here, and we’re lucky to have them available. Listed as ‘lost’ in 1978 copies were returned from Nigeria seven years later. It’s especially noteworthy as it’s the first episode to feature another Time Lord aside from The Doctor, in this case The Monk.

While discussing the recent departure of Ian and Barbara, Vicki and The Doctor become aware that Steven Taylor has stowed away on the TARDIS. He’s certainly glad to be away of the planet on which he was stranded, but has trouble accepting that his new home can travel through time and space. When they eventually arrive in Medieval England everything seems business as usual…until The Doctor notices something odd about the monk who has taken up residence in the local monastery. Investigation reveals that he is also a Time Lord, but while The Doctor is concerned with exploration and helping people in need The Monk has been meddling with history.

Although it’s a constant theme in later seasons the notion of causality is not often touched on in the early eras, making this an interesting episode. The Monk isn’t out to cause trouble or even mischief but instead manipulates history so the good win out. He helped Da Vinci design his flying machine and the Celts build Stonehenge. The real crux of the episodes comes from the morality of manipulating history, but the rest of the story works just as well as Steven, Vicki and The Doctor work to outwit the meddler and escape in their own TARDIS.

Intermission: there’s a gap of five stories between The Time Meddler and The Ark. During this time Vicki stays in Ancient Greece to stay with a man she falls in love with. Shortly after that they pick up a young English orphan named Dodo who accidentally hitches a ride.

When The Doctor, Steven and Dodo arrive in a dense jungle they get a tad confused at the unusual mix of wildlife they encounter. Before long they find out that they are actually on a spaceship that is carrying the remaining members of Earth’s population to another habitable planet. This serial is divided up into two different parts, each one containing a rather different and compelling story. Initially things seem fine, but when the guardians – the humans left awake to watch over the journey – begin to fall ill it becomes clear that Dodo has brought the flu with her and the people of the future have no immunity to it any more. Halfway through the TARDIS makes an exit, arriving back on the Ark further in the future where the alien servants who were accompanying the humans have rebelled and taken over the ship.

It’s surprising that this story features two practically separate narratives since either one of them is strong enough to carry the entire span of the serial. The first is a classic sci-fi story, with the remaining human race being put at risk by the actions of the time travelers. It’s interesting and engaging, and the solutions the Doctor comes up with and peoples responses to the crisis are grounded in realism. Although this story could’ve been taken further the twist that leads into the second part is equally clever. 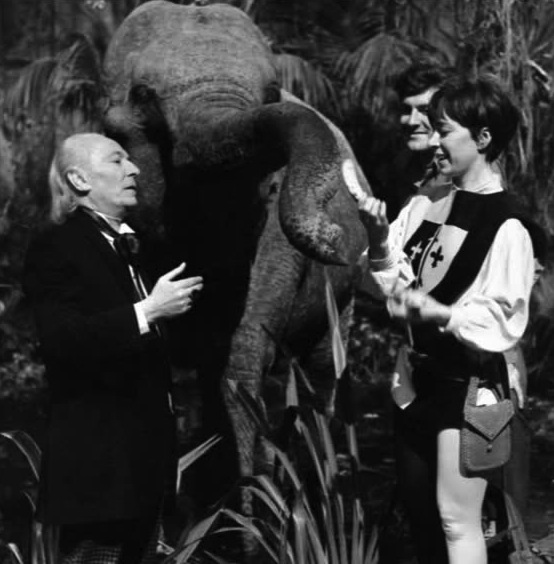 As far as DVD releases go this is the first adventure with Dodo, who is a welcome attitude among a group of increasingly serious characters. She is a fun foil for Steven and the Doctor and fills the void left by Susan.

One of the purest historical episodes of late, this adventure sees The Doctor, Dodo and Steven arrive in the town of Tombstone just as the Clanton Brothers ride into town looking for Doc Holiday. Seeing a resemblance Doc sets up the Doctor to be mistaken for him, putting into motion a series of events that leads to a showdown between the Clantons, the Earps and Doc Holiday.

As far as Westerns go they’ve thrown in all the archetypes to good effect. The settings and characters look more than the part and Steven and Dodo trying to fit in leads to some fun comedic moments. Likewise the mistaken identity subplot yields some chuckle worthy moments as the Doctor unknowingly blunders his way through dangerous situations. The producers have started to experiment with the a bit more by setting the story to a ballad that is sung in between the scenes. As far a melding of Doctor Who and the Western genre are concerned this is a damn fine story.

Quite the interesting concept in this story, and time for a complete companion changeover. Since The Gunfighters Steven has departed the crew, having stayed behind on an alien planet to act as mediator for two warring races seeking peace. The Doctor and Dodo land in London during the 1960’s and learn that the government is about to activate an artificial intelligence that will manage and control the nations military forces and…well, you know how this is going to end.

The rather silly sounding WOTAN system wastes little time before it starts mind controlling people and having them build its War Machines. The Doctor cottons on pretty gosh darn quickly and sets out to stop things while Dodo is taken clubbing with the Minister’s secretary Polly, where they meet a sailor named Ben. Over the four episodes The Doctor and the army battle against this new threat before the Doctor is able to get his mechanical know-how on and put a stop to things. There’s a couple of cool ideas at play but over all it feels like a rather plodding story that doesn’t give the viewer much to engage with. Although the action does get pretty exciting at times there’s no escaping the fact that the War Machines themselves look like a Dalek knocked boots with The Krushinator. Their steam attack doesn’t help the viewer take them seriously either.

The introduction of new companions is well worth noting. Dodo is all but absent and departs at the end but leaving the Doctor a note. Polly and Ben both provide interesting new characters with Polly as the fashionable girl of the 1960s and Ben as a stalwart hero. They have a good dynamic with the Doctor and become the two companions with him when he regenerates for the first time.

Thus concludes our reviews of the existing adventures of the First Doctor. During his first encounter with the Cybermen (currently lost) he succumbs to the attack and regenerates – giving us a whole new bunch of episodes to review! Stay tuned!

← Retro Review: The Phantom
10 Woman I Want to Play Enchantress in Thor 2 →