Last night my buddy Andy said “I would watch anything with Jason Statham in it” and I replied; “Me too, but probably for different reasons”

So it’s true that the action genre seriously favours the Y-chromosomal members of our society but that’s not to say that the screens both big and small haven’t given us some ferociously kick-ass female characters over the years, some even in prime roles; and so, here’s my top picks for Kickass Women of the Screen.

The reigning queen of all things xenomorphic, Ellen Ripley is (for those of you unaware) the protagonist of the good movies with the word alien in them. Before Paul Anderson got his grubby mitts on the franchise and churned out two of the least impressive movies featuring monsters with acid for blood fighting a space-faring tribe of warrior kings imaginable (how, seriously, do you fuck up that combination?) there were two exceptional movies about the so called Xenomorph – Ridley Scott’s ALIEN and the follow up, ALIENS by James Cameron – and then two less-good but still entertaining enough movies that continued the series.

If you haven’t seen em, buy the BluRays and watch the first two. They’re amazing. Actually now that I’ve pondered that for a moment if you haven’t seen them you are probably one of the younger crowd of geeklets so, uh, go ask your folks and then watch it

Ripley started as part of an ensemble, but then quickly took the helm of the first movie and by the end of the second, had cemented herself as the most badass woman ever to board a space ship. She’s smart, she’s  capable and most importantly, she can kick the shit out of dozens upon dozens of shiny black monsters with a combination of “flamethrower-shotgun” and “robot suit”. 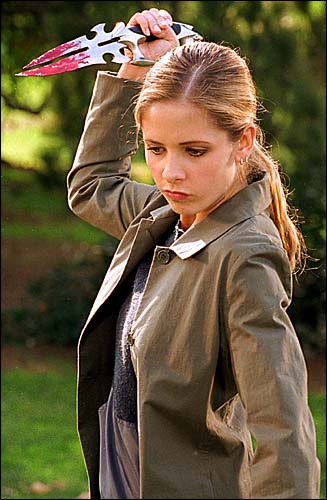 Following on from the pretty mediocre Buffy The Vampire Slayer film, the Joss Whedon helmed TV series was a staple of my teenaged television regime. The snappy writing, great action choreography and large cast of interesting monsters for Buffy to slay lead to the series becoming a cult favourite through the 90s and got it’s own spin off Angel.

Buffy is the titular slayer, a chosen one who gets extra health, levelled up strength and skill in order to kill vampires, werewolves, demons, wendigos, ghosts, gentlemen, mutants, zombies, occasionally gods and which is ridiculous, cause witches they were persecuted, Wicca’s good and love the earth and women power and I’ll be over here.

Buffy was a teenaged superhero, and along with her breakfast club of companions, including her mentor / librarian Giles (Anthony Head) she had seven years worth of thrilling adventures. The awesomeness of Buffy was helped along immensely by the incredible talent of Joss Whedon; anybody who has seen BTVS, Firefly or the recent Avengers film knows the guy can handle an ensemble and loves him some strong, female characters. 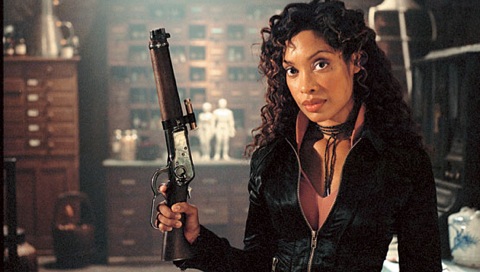 I’m a huge Firefly nerd. I’ve recently gone through what is probably my thirty or fortieth viewing of the series as my BluRay set arrived last week. Although only a brief series, totalling fourteen episodes, Firefly was the ultimate in space westerns; a fully realised and intricate world of border planets, illegal salvage, smuggling and Alliance patrols. This is Joss Whedon at his best, Avengers notwithstanding.

Zoe is the first mate of Serenity, the firefly-class ship piloted by her husband Hoban ‘Wash’ Washburne (Alan Tudyk) and captained by the amazing, wonderful, charming, gorgeous Mal Reynolds (Nathan Fillion). Another ensemble series, Zoe is at her best when playing off those around her. She is unflinching in the face of danger and never above a quip when facing peril. She’s sexy, smart, sassy and loyal to the very end.

Some of the series best lines are from Zoe, either a retort to something delivered by her captain or in dialogue with Wash or the other crew of Serenity – particularly Jayne Cobb (Adam Baldwin) who often serves as her brutish, ignorant, mercenary foil.

Without a doubt, Zoe is one of the coolest women in science fiction ever.

In the beginning we met the young, vivacious Sarah Connor. She was a waitress, she lived with an overtly sexualised housemate, she had a pet iguana. She was living the 80s dream until a murderous robot from the future travelled back in time to kill her and her yet-to-be-conceived son and thus win a war that wouldn’t begin for a few decades.

This, ladies and gentlemen, is James Cameron’s The Terminator.

Before he was making Titanic and Avatar, James Cameron made what are hands down the two best time travelling robot scifi horror movies ever. Terminator introduced us not only to Sarah Connor and Kyle Reese (Michael Biehn) – the parents of the future leader of humanity – but the T-800 (Arnold Schwarzenegger) a robot killing machine designed to look like a human, infiltrate the resistance bunkers and destroy everything in its path.

In Terminator Sarah was a victim, hunted by the T-800, making love to the man from the future and ultimately crushing the cantankerous contraption in a big crush machine press thing. It was pretty epic. If her story had ended here, she probably wouldn’t have made this list for while Sarah was pretty badass at the end of the first movie it wasn’t until the second instalment that this character truly became one of my favourite female characters ever.

In Terminator 2 Sarah has been confined to a mental hospital for trying to prevent the end of the world (until the apocalypse actually happens, discussing it makes you pretty much just look like a loon) and in her time of incarceration has become a lean, determined, fighting champion. She is taught, she is tough; she moves her bed around to do chin ups and pushups while doing a handstand. When she escapes, she beats the living shit out of the creepy, molestery orderly and then takes a guy hostage with drain cleaner and a few shattered bones. But that’s okay, he has two-hundred or so more.

Throughout the second movie Sarah Connor never stops being badass. She gives out to John (Edward Furlong) for coming to save her, totes guns and explosives like nobody’s business, knows how to rock a tank-top and remains unwavering in her determination even when being speared by the liquid metal T-1000 (Robert Patrick).

It’s just a shame she wasn’t around for the third film, and instead we got Nick Stahl whining like a child. 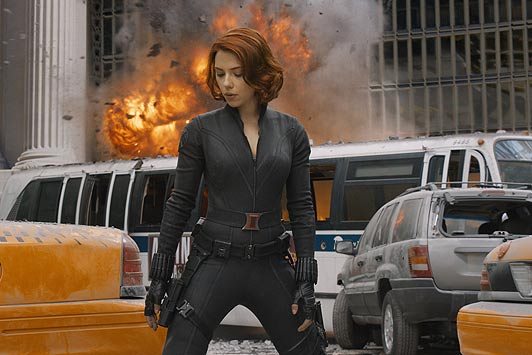 A recent addition to the silver screen of geekdom, Natasha Romanoff is the Black Widow, a master assassin who works for SHIELD under the command of Nick Fury (Samuel L. Jackson). She first came to our attention, at least in the cinematic universe, as Tony Stark’s (Robert Downey, Jr) temp-assistant-revealed-to-be-a-super-spy in Iron man 2 and has recently reprised her role – with no lack to total ass-kickery I assure you – in The Avengers, which just cracked the list as the third highest grossing movie ever behind Avatar and Titanic.

This is another Joss Whedon adventure and so it should be clear to you now that the guy knows how to write women. Good women. Women who don’t need to be sex objects to be awesome. I mean she is, I’m exclusively attracted to large, hairy men and even I think she’s hot as hell, but it’s not the defining factor which makes her awesome.

Which I suppose, breaking from the discussion of Widow for a moment, is my overall measure for this list; a character can be sexy, male or female, but Daniel Craig isn’t awesome as Bond because you could grate cheese on his abs. Jeremy Renner isn’t awesome as Hawkeye because he has adonis like cheekbones. Jason Statham isn’t awesome because his accent is gorgeous and he takes his pants off all the time – okay well not only for those reasons. Just like Black Widow isn’t awesome because Marvel have poured ScarJo into black leather and given her a gun.

She’s awesome because she can do flips all around some bad guys and break their necks with her thighs.

She’s awesome because she can leap off a shield and hitch a ride on an alien gopher.

She’s awesome because she can pilot said gopher by stabbing the original pilot in the shoulders with little daggers and turning him where she wants to go.

Which is why this list exists. Sarah Connor exudes confidence and doesn’t need to get her boobs all smushed up in latex or show off 95% of her lady-cave to get the job done. Zoe Washburne can beat down a guy twice her size, say something funny and have the most amazing hair I’ve ever seen. Seriously. It’s like ringlets of spun bronze. Ripley looks just as much at home with her adopted cat Jonesy as she is wearing a bright yellow loader and pummelling the exoskeleton off an Alien Queen.

And so this article goes out to all the women out there; the firefighters and the cops and the naval officers and the soldiers and the doctors and the teachers and the nurses and the lawyers and everyone else who is out in the verse, being awesome because they are and being sexy because they can and letting neither their gender nor their appearance define them or dictate what they can do.

This list is by no means exhaustive and I’d love to hear who your favourite women of the screen are.

← 50 Years of Bond: ‘You Only Live Twice’ Review
‘Prometheus’ Review →

2 thoughts on “Hedgeworth Presents: Kickass Women of the Screen”