**There are NO spoilers in this review**

Before I decided to head into the theater and let Prometheus bathe over my body I went on Rotten Tomatoes and checked in with some of the “one sentence” summaries of reviews posted from various websites.  They were oddly mixed to the point where some were calling it a modern day masterpiece in science fiction while others called it a horribly lazy and nonconforming attempt at picking our brains.  Now I understand that all movies can divide us and cause debate among our opinions but to see such an abstract division between the people who enjoyed it and the ones who didn’t was shocking to me.

Until I saw the movie.

Immediately after the opening credits rolled through and the first scene of Prometheus soaks into your brain you instantly know that this movie will mean so many different things to so many different people.  That’s usually what happens when a movie focuses on some of the greatest questions to ever be asked by mankind and then leaves a lot of them open to interpretation. Why does life on our planet exist and more importantly, where did we come from? That very first scene involves the catalyst of the movie’s meaning as well as the motivation behind these lifeforms.  The blurry part is that it’s presented in a way where it can be debated and broken down just as the characters do in the film.  One by one we start morphing into a skeptic or a believer while we search for an answer in the film’s meaning. 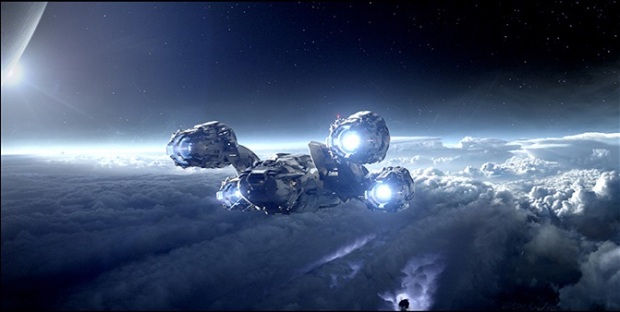 Ridley Scott stuffs Prometheus with rich thematic plot devices that dare us to seek out the truth and to believe in our own wonderment. Is the movie that ambiguous or opened ended in places? In short, yes, but even while putting those specific scenes aside you still get a fairly linear plotline that helps drive the film from point A to B. I truly believe that you should walk into a viewing of Prometheus with the most open of minds, devout of any prior knowledge to the film’s existence, which trailers so shamelessly tried not to do. It’s unique in every sense of the word, it’s exciting, and its tried and true Science Fiction in its highest form. The film was born out of an idea to link the beginning of the Alien franchise but it adapted and evolved just like the species in the movie to become something much more than that. It managed to exist as a prequel to Alien as well as a launching of an entirely new and original franchise that explored just how microscopic our existence is in comparison to the rest of the universe. By the time Prometheus ends you should have a pretty well-rounded view of how this all relates to the former as well as some polarizing questions and theories about how this relates to the latter.

Aside from nestling into our brain and asking us to use that organ in its entirety Prometheus manages to be a beautiful film in its aesthetic appeal. Gorgeous landscapes are painted over the screen by meshing bits of actual locations and advanced CGI. These massive set pieces were built to feel organic in the way that we were exploring it with the characters in the movie. Everything truly just felt real, which is something that I always connected to the original Alien film. Sure there were mini models and matte paintings in the 70’s that have been replaced with CGI today but the ability to blend them together and only use them when they had to was what gave Prometheus such a believable world to play in. Within the first 10 minutes of the movie you’re taken to so many different environments that are all so goddamn beautiful. The set-up is just as good as the meat and bones of the movie in the sense that I wanted to relive the entire experience only 40 minutes into it. I guess it could be the thrill of exploration and the sense of wonder as I sat there, dying to know what was inside those structures. That inherent sense of discovery is one of the reasons I didn’t mind if a lot of the moments in the film weren’t analyzed and broken down into ways that make them normal to us. We all developed our own perspective about what those ideas were and the answer we get could never truly overtake the curiosity it started with, at least in my opinion it couldn’t.

the crew explores another world

The cast was, well, magnificent really. Fassbender continues to deliver powerhouse performances and is so synthetic with his actions as the android David that I ceased in believing that he was a real person. Theron brings a desensitized coldness to Meredith Vickers but adds just enough insecurity to come off as relatable at times. Noomi Rapace is front and center throughout most of the movie and she’s able to show American audiences why the rest of the world was so pissed when Lisbeth Salander was being recast. She gave the most physically demanding performance in the movie and her emotional commitment to certain scenes sold me from the second they started. Idris Elba is the perfect Captain in the sense that he’s the grizzled space transporter who’s seen everything in the galaxy but is concerned just enough to stay behind and monitor the exploration from afar. Guy Pearce nabs a role that seemed odd at first but makes sense if this builds into a franchise that can look into Weyland’s past. Lastly Logan Marshall Green shows up and does his best to look like Tom Hardy while bringing a similar presence to the screen. OK that comparison is slightly unfair to him but he’s able to come into his own and channel a really solid performance. There were some minor complaints that I had in some of the character transitions as well as a lack of fleshing out particular ones. Even some of their actions were questionable at times and I found myself a bit discombobulated with the pacing of two certain scenes, neither of which I’ll mention here. 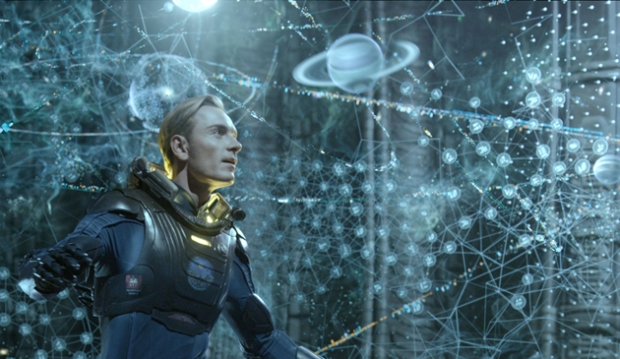 Michael Fassbender as the android David

This was another breed of Science Fiction filmmaking that not only delivered from a film aspect but also from an intellectual one. I found the entire thing to challenge my ability to conjure theories while piecing them together to come to a satisfying conclusion. It was engaging, it was daring and it was something that I want to experience again. I can see this as one that divides audiences but takes the ones who enjoyed it and has them debating and speculating about every theme this movie throws at them… until the (hopefully) inevitable sequel is commissioned by Ridley Scott.