The Good, The Bad, And The Ugly: Team Fortress 2 “Pyromania” Update

“Meet The Pyro” video has been released.

“Meet The Pyro” is the last of nine class videos in the “Meet The Team” series of shorts, and it’s been a long road to this point to say the least. Team Fortress 2 was initially released back in October 2007, and saw the “Meet The Heavy” video in May that year to promote the game and the Orange Box.

What followed over the next four years were videos showcasing the other classes, highlighting their personalities, quirks, and skills. The Soldier, The Engineer and The Demoman all followed The Heavy in 2007. The Scout, The Sniper, and even a Sandwich all found their way online in 2008. The Spy released in 2009. Two years later we got The Medic. That saved The Pyro for last. And truly it was well worth it.

“Meet The Pyro” is brutal, disturbing, and most importantly, truly amazing.

I now whistle that song as I play Pyro.

Another addition from this update is Pyrovision. A simple set of goggles allow everyone to experience the joys of Pyro’s pastel world.

Seriously, this is from in-game: 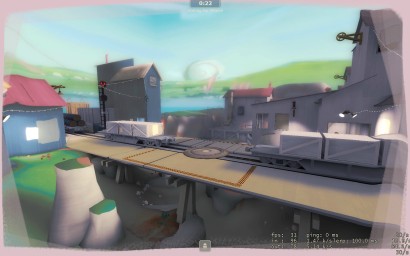 Seeing the world through Pyro’s eyes is both amazing and terrifying. It’s like World War II in Candyland.

I suggest you start running.

This is the Scorch Shot, one of Pyro’s new weapons from the update. I’ve gotten some real hands on time with it, and I don’t see the point of it as a separate flare gun.

When the Scorch Shot strikes an enemy three things happen: the first is that the enemy is lit on fire; the second is that the enemy is knocked back a few feet and their actions disrupted for a split second; and third the flare then falls to the ground and explodes, catching anyone in its radius on fire.

So how is this a problem?

The Scorch Shot is too situational and the burst radius is entirely too small. Even if you land a direct hit on someone, say a Medic player, there’s a good chance the target that Medic is healing won’t be hit by the burst. In order to be effective, the enemies need to be clumped together.

The Scorch Shot needs to be reimagined and tweaked for it to be a viable weapon, or have its attributes given to the base flare gun and go through some rebalancing.

The update just came out so there will surely be a few balances comings in the next few months. Or so I hope.

The other problem is this:

The Ugly (And Pink)

Did you notice the flying unicorn that’s being ridden by the other characters? Valve released “Meet The Pyro” to ThinkGeek a month before the update so they could manufacture this:

The Balloonicorn. An inflatable pink unicorn. It also appears in game and “assists” you in killing others.

So why is this in The Ugly section? Because I’m not going to waste my money on it. Honestly, who needs this thing? I can’t think of anywhere I’m going to put a 3…foot…tall…pink unicorn that I’ve just named Glitterhoof, who could totally be friends with the Portal turret in my room.