Strung together by Hedgie

Does whatever a Spider-Man does!

I was one of those on the fence people when they first announced The Amazing Spider-Man; a reboot to the series previously helmed by Sam Raimi and Tobey Maguire. I didn’t care much that they were rebooting it only five minutes after the other trilogy had concluded and instead of making Spider-Man 4 – although if the internet were to be believed that itself was a heinous crime that demanded the Sony executives receive a public flogging – because honestly, Spider-Man 3 was shit, and the previous two films were only really adequate anyway. I like Raimi and I don’t hate Maguire but they weren’t, in my opinion, the right people for the job.

Marc Webb however, as his ever so appropriate surname would suggest, is another story altogether.

The Amazing Spider-Man, which for sake of not having to type that out over and over again shall be referred to in this review as ‘TASM’ from here on in, once again takes the audience through the origins and genesis of everyone’s favourite web-slinger. This could have been done in the same tired fashion as literally every other Spider-Man entry out there: Peter Parkerlives with his aunt and uncle, his parents are dead, they’ve always been dead, he gets bitten by a radioactive/genetically mutated/magic spider, gets powers, learns to use them during a montage, Uncle Ben gets shot, Pete could have helped, with great power, cue villain.

What Webb has done however is take that origin story, which honestly we all know is needed for a fresh start to take place and for the previous films to be discounted in the minds of the audience, and twist it into something new. The Parkers aren’t just dead, they’re important. Aunt May and Uncle Ben aren’t just his wards, they are significant players in the script and Ben (played superbly by my favourite American President, Martin Sheen) actually gets a fair bit of screen time prior to his being shot and actually has some purpose besides eventually being shot. Gwen Stacey starts as a classmate, becomes a friend and becomes a girlfriend in a way that seems organic, and Emma Stone is great in the part. Emma Stone is always great though, let’s be fair.

How could you not love Emma Stone?

Where the film shines most though is Garfield. Well, Garfield and the ridiculously detailed CGI which, and I say this without hyperbole, shits all over those Raimi films not just in fidelity but in style. Peter Parker feels like a high school loser. He has his skateboard, universal symbol of the outsider since Bart Simpson and Michaelangelo. He’s a bit of a nerd. He gets beaten up by jocks – a nice addition to the series is Flash, the bully who hates Parker but has a serious man-crush on Spidey.

Parker’s an a pretty unpopular guy, but he has a good heart.

Aside: when you think about it, that’s an important part of  being a hero. The loser part, not the heart part, everybody knows a hero needs heart but being a loser would be seriously helpful: no wonder he can disappear during all those attack scenes (throughout the Spider-Man mythos not just in this particular film) and have almost nobody concerned for his whereabouts.

Garfield is the perfect Peter Parker and he’s also the perfect Spider-Man. While the world retains a realistic and serious tone, Spidey is campy and fun and during his initial development of the powers it seems like he genuinely fails a lot. There is still the occasional montage, but the movie doesn’t rely pin them to take Parker from helpless pleb to superhero in a forty-second window. When he’s first learning about his agility, he does a lot of cool skateboarding tricks. He swings from chains. Hell, he only learns he can cling to walls by accident, which seems both likely and fresh. Then when he does learn to web-sling, boy-o-boy does he get it wrong. He misses, hits walls, and generally has no grace or style what-so-ever.

Later though, Spidey swings and glides like Spidey should. It’s all very well done.

It feels a lot more organic. Even when he’s making his suit and creating the web-shooters it no longer feels implausible, which it could have. The moment where Parker first says “I’m Spider-Man” to another character was delivered with such impeccable weight by Garfield that instead of sounding like a comic book movie line, it had genuine sincerity and depth.

Why did you even make a mask if you’re never going to wear the thing?

My biggest concern though, getting back to the point I was making about seven paragraphs ago, was that I had reservations about The Lizard as a primary villain. He’s well known within comic-circles, but would anybody in the mainstream (who we sadly still have to cater for, despite none of us really caring what they think) know enough to be interested? Would they pull off the subtle nuance between scientist-striving-for-recovery and oh-crap-oh-crap-big-monster-lizard-thing? Would they get an all-CGI character right? Remembering that this is the studio (although not the creative team of course) that brought us that awful Venom CG atrocity and you can see why I was nervous. Technology may have improved since the days of Green Goblin 2 and Ghost Rider, we do have Avatar now, but that isn’t a guarantee they will use it.

My fear was misplaced.

Rhys Ifans is fabulous as Curt Connors, the amputee scientific genius for OSCORP (which was another nice addition) and the transition from Connors to Lizard is outstanding. I’m not going to spoil any of the plot surrounding this guy, because it’s well worth seeing for yourself, but I will say that I was thankful he didn’t “hulk-out” when turning into his alter-ego. When The Lizard, Connors still retains his intelligence, still speaks and still interacts with the world much as Connors did only about five feet taller and in desperate need of an exfoliant. It could easily have gone the other way, with The Lizard just being a brute-force rampage device but they retained some finesse and it really, really works. 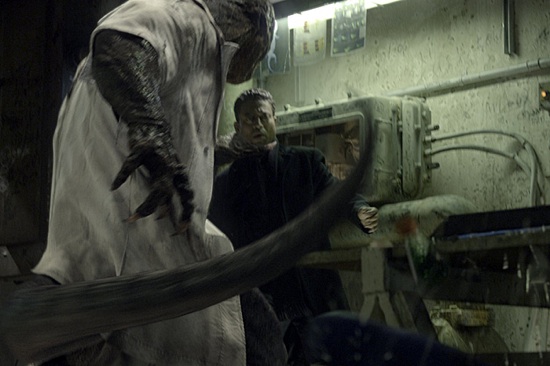 It’s not all perfect though. Some minor quibbles my film-going comrade had were that as an origin story, some parts of it are inevitably familiar. Thankfully they were used in novel ways, but it still does have a few moments that you just kind of smile and nod and wait for the next bit because you already know that. He also felt that as a superhero origin, it needs to be non-reproducible. Which in TASM clearly isn’t the case. Anybody could walk in that room and get bit by one of those spiders and since that was the only stage in the process, it’s assumed that all of them would get the same abilities. It was a bit messy, but easy enough to ignore.

Apparently there is a deleted scene that explains why Peter didn’t die or mutate into some gross abomination as a result of the cross-species genetic splicing but as that didn’t make it into the final movie, it doesn’t count. Maybe it’ll go back in for the home release.

For me the biggest annoyance was that I’m no longer sure there is a single citizen of Manhattan to whom Peter Parker hasn’t shown his face. Seriously. What is the point of knitting a mask if you’re going to take it off, literally, for everyone. The time could have better been spent making up some business cards in InDesign: Peter Parker, your friendly neighbourhood Spider-Man with his phone number and home address on the other side.

It’s a niggling complaint but it’s there. Really those were the only faults we had with the movie though and neither limited our enjoyment of the film any.

It was entertaining, well plotted and everyone was great in their roles. We’re hopeful for more and personally I’d like them to move away from this silly notion that films have to come in threes and make five of them, each one furthering the mythos and giving us new villains like Mysterio and better versions of Green Goblin and Venom. Because Venom is a seriously awesome bad-guy who was seriously terrible when he was played by Topher Grace.

For now though, two sequels have been confirmed and we’ll have to be thankful for that because if they can keep up this level of impressiveness when they don’t have an origin tale to fill a third of the film then we’re in for a treat.

← The Good, The Bad, And The Ugly: Team Fortress 2 “Pyromania” Update
The Perfect Zombie Game →

4 thoughts on “The Amazing Spider-Man: Review”