Even a cursory glance and the video game industry will tell you two things – people like playing zombie games and game developers like putting zombies into their games. Game developers will put zombies in anything, regardless of relevance. Gritty, realistic cowboy game Red Dead Redemption? Zombies. Cold war themed first person shooter? Zombies. And every time zombies get put into a game people buy it. They don’t even have to make sense any more. Design a game where you have to plant a garden to defeat zombies and you’ve got a best seller on your hands.

In spite of this massive volume of output we’re yet to see a really great zombie game. We’ve had some damn good action games with zombies featuring as the main enemy, but none have really embraced the genre of zombie horror. We want a game that ties all the conventions of zombie fiction together. What am I talking about? Let’s break it down…

The best zombie movies, books and comics put the focus on people simply trying to survive. The Walking Dead, World War Z and Night of the Living Dead were all about hiding, barricading windows and trying to find enough supplies to see the next sunrise. Given what a key factor this is in all the best zombie fiction it’s strangely absent from the gaming world. Resident Evil used to make it an important mechanic, forcing players to try and conserve ammo and health herbs (seriously, what’s with the herbs?) to get through the legions of undead. This has been scrapped, along with pretty much anything else that made the series worth playing.

In the Call of Duty zombie side-games the player must monitor the windows and doors and keep them boarded up to prevent zombies from swarming into the stronghold. If the primary mechanics of a zombie game featured putting distance between you and the hordes by pushing furniture against doors and nailing up the windows, or creating other obstacles by trashing walkways, staircases and the like, it’ll create the sense of urgency and horror this genre needs. Throw in scrabbling for weapons and food in every corner before the ghouls bust their way in and it’s fun (I guess?).

After reading the previous two paragraphs you could be forgiven for thinking that I’m a killjoy who doesn’t want to have fun playing video games. Not the case. What we want is balance. A zombie game that doesn’t involve clobbering, flattening, shooting and incinerating zombies isn’t a zombie game worth playing. What a zombie game needs is a sense that the zombies are easy to take down on their own but throwing yourself at the oncoming horde is lunacy.

Zombie games shouldn’t feature gunned up, steroid ridden maniacs laying into the undead, but an average joe using whatever they have at hand to do the job when needed. Guns should be a rarity and come with their own set of risks (loud noises luring the zombies) leaving the player to rely on commonly found blunt objects and anything that can be thrown. Dead Island looked like it might’ve mixed the action and survival pretty well but as good as the action mechanic was it wasn’t well applied to the game, and we wound up slogging through increasingly identical sewer levels. 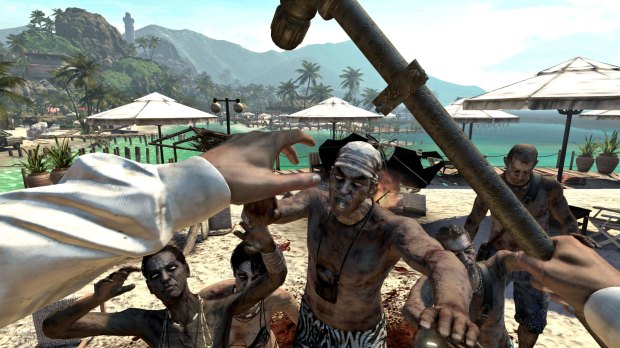 Zombies. Lots and lots of zombies. A fuckton of zombies. Hordes of zombies so vast that you’re at risk of drowning before you get devoured. If you’re not dealing with Joss-Whedon-at-a-geek-convention level of crowd density then I don’t want to know about it. Resident Evil was marred by technical limitations and only featured a couple at a time – even with a few remaining bullets it’s never difficult to dodge past them. Confrontation should be a last resort unless dealing with small or scattered groups.

Dead Rising no doubt springs to mind when video game zombie hordes are mentioned, having especially note-worthy swarms of the shambling dead. This is somewhat countered by the player being capable of turning said horde into mincemeat within minutes after strapping a lawn-mower to a wheelchair. The heroes of these adventures are always, confusingly, at more risk of being killed by their fellow man than the face eating ghouls.

Unlike zombie numbers, video games of this ilk would benefit from less rather than more. Dead Island became needlessly complicated with conspiracy theories, Dead Rising sends you back and forth trying to solve the mystery and Resident Evil has turned into a farce with its ever expanding cast of lunatics, government agents and secret research grants. Most video game players like to imagine what they would do in a zombie apocalypse, therefore casting them as the everyman would be the way to go, and the everyman isn’t going to unravel a secret government conspiracy, destroy a research facility or find the cure for the infection. The plot should be straight forward – the object of the game is to escape. For example, if the player begins in the centre of a major town and the object is to get out without being eaten. A well build sandbox would be perfect, giving players options of which way to go. The atmosphere should come from the situation, not a hackneyed story put together by a kindergartner.

What’s the point of facing the apocalypse alone? Nothing would enhance a survival horror game than having to rely on someone else. Left 4 Dead had the right idea about this when it put four online players together and throw zombies at them, telling them that they can cooperate of die. The flaw in this concept is that players are given no choice but to cooperate with each other by working their way through various scenarios engineered for a group of people to over-come using teamwork.

The problem here is that the scenario isn’t totally realistic, lest of all in the world of online gaming. If online gaming has left us with one thing, let it be this: people are dicks. Sure, working together in a cooperative environment to solve a puzzle ala Portal 2 is rewarding, but when the same two people are facing the flesh eating masses we’ll see who throws who into the fire first. Dead Island had the nifty mechanic where online players in the same area of the game as you could drop into your game, if only to clobber zombies together. If such a mechanic still existed but served more of a purpose it could be something really worthwhile. Imagine if a second player could help you move heavy obstacles and open a new exit – or grab your supplies while you hold back the zombies and leave you in the lurch. Having to rely on other people to help you survive knowing that they could turn against you at a moments notice will make the game an experience unlike any other.

In the metaphorical blender we need the hordes of zombies from Dead Rising, the online drop in mechanic from Dead Island, along with the improvised weapons, the limited supplies of Resident Evil with the ability to barricade from Call of Duty, the reliance on people lifted from Left 4 Dead and a nice sandbox town to put it in. We need someone making this game happen.

One thought on “The Perfect Zombie Game”