Talk to any gamer over the age of 25 about their early years in the hobby and eventually the name Carmageddon will come up. In an age when video games were still mainly a family-friendly business and adult gaming was only beginning to become widespread it was one of the first games to become well known for it’s extreme level of violence. It’s not much by today’s standards but a racing game that awarded points for running down pedestrians was quite a shocker in the pre-GTA era of gaming.

Initially intended to be a straight forwards derby with an emphasis of banging into the other racers the game took on a different style when it became a licensed Mad Max video game. Now all the cars were kitted out with blades and over-the-top colour schemes. When the Mad Max idea fell through the company creating the game changed it to a tie-in with the 1970s schlock film Death Race 2000 which was due for a remake at the time. This introduced the idea of scoring points by hitting pedestrians, a concept that stuck with the game after the Death Race 2000 remake was canned and the game changed it’s name. 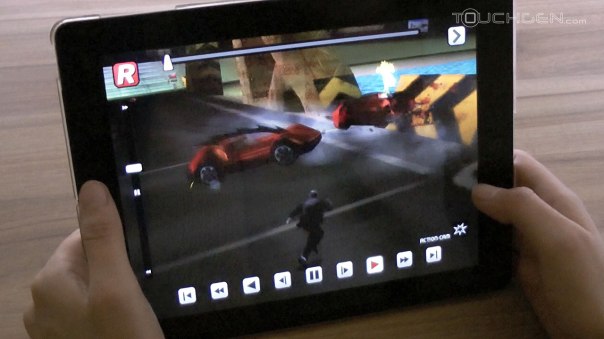 Released in 1997 on the wave of widespread word of mouth hype Carmageddon made a name for itself with the radical notion of combining racing, destruction and gore. Players were free to complete the level by coming first in the race, turning the other racers into wrecks or killing all the pedestrians (no easy thing). You’re on a tight timer that you replenish by causing chaos, so players have to participate in the mayhem to stay in the game. Carmageddon is surprisingly imaginative with dozen of madcap bonuses to pick up ranging from pinball physics to shooting bolts of lighting. Each level is comprised of a small sandbox area riddled with secrets and ramps to find and enjoy – everyone remembers crashing the football game on the first level. The opponents are varied and often funny with plenty of pop-culture archetypes and even an O.J. Simpson character complete with the Bronco he infamously used to flee the police.

All the nice touches from the original are still in place, such as the instant replay mode and the avatar of your character getting beaten about their cockpit through a race. The controls have been ported to the touch screen format brilliantly, with pedals and handbrakes in the corner of the screen. Switching to the map and instant replay is a matter of swiping the screen to the left or right, repairing the car is tapping the health meter and recovering your stuck car is just a two finger tap. It’s very easy to get used to and easy to play for extended sessions.

This iPad version is a perfect recreation of the 1997 original, so newer players might be put of by the sprite-based characters and the levels that look as though they were built in Minecraft. No effort has been made to change the game’s visuals except in the menus, so nostalgic players are in for a treat when the original cinematic plays at the beginning. Aside from the two starting cars you can’t expect to see any others become available for use until the game has been completed. No customisation has been added, meaning that you only have the generic male or female characters to use. We strongly suggest using the female character, as she doesn’t keep yelling PG swears every time she does something. There’s no story or driving motivation (boom tish) beyond opening up new arenas to explore, but that’s enough in a game like this.

If you remember enjoying the game back in the day then you’ll have stopped reading this article by now and downloaded it. If you’re a fan of retro games then this is a great time to pick up a classic without worrying about it having been messed with. If you’re a younger gamer you may find the sprites an eye-sore but if you can look past the old-school graphics you’ll have a blast.

One thought on “Game Review: ‘Carmageddon’ for iPad”