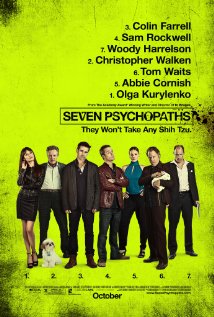 Plot: A screenwriter gets wrapped into his best friends dognapping business.

The title of the film refers to the screenplay that Martin (Colin Farrell) is trying to write. It sounds more like an anthology of stories about seven different psychopaths with not much connecting tissue. Martin wants it to be more than just a movie about guys with guns. He wants it to be a movie about peace with guys with guns. It sounds like to me that he wants to write the movie that writer/director Martin McDonagh made previously to this, In Bruges. McDonagh swears he didn’t intend to write a meta-film, but he definitely did.

When Martin (the character) gets a writer’s block, he goes out drinking with his best friend, Billy (Sam Rockwell). Billy is never without an awesome idea, at least in his head it is awesome. He always has some operatic shootout or interesting psychopath to give to Martin. Billy is also a dog kidnapper. He kidnaps them from seemingly rich owners so that he can return them when they put up a reward poster. He does this with his partner in crime, Hans (Christopher Walken). Billy and Hans are like different sides to the same coin. Billy is super animated and never seems to know when to shut up. If anyone but Sam Rockwell was in the role than this character would fail. Rockwell seems to know how to start at the ground level of crazy and rise to the top keeping you charmed the whole way. Hans on the other hand is very steely , quiet, and deadpan. I feel like Walken hasn’t necessarily done this kind of role in a while. He also has some of the most tender scenes in the whole movie when he visits his wife in the hospital. 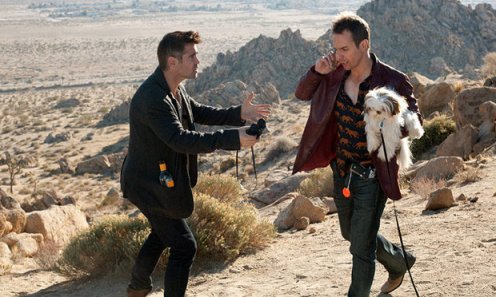 During one of Billy’s dognapping plots, he steals a Shit Tzu that belongs to a maniacal gangster named Charlie, played by Woody Harrelson. Woody is in his wheelhouse combining his sense of comedic timing with a dramatic intensity. He goes on the offensive looking for his dog and tracking down this trio of dopes. This is when the movie takes a weird turn. Martin, Billy, and Hans drive out into the desert and camp out. They share their ideas about what Martin’s script should be like as they wait for Charlie to catch up with them. It is such a weird turn of events. It threatens to kill the momentum from the beginning half, and on a certain level it does. Regardless of that, McDonagh’s quick witted dialog and the strong performances from the actors make this lull in the movie worth it.

Occasionally, the movie’s story is interrupted by scenes from Martin’s screenplay. They come with little warning, and as the movie gets closer to the end, the line between the reality of the story and the fantasy of Martin’s screenplay become a fuzzier and fuzzier. It never gets confusing though. It is simply a movie that depicts reality just as interesting if not more so than fiction. Each little short spotlights a different kind of psychopath. They tend to be pretty gruesome and disturbing. 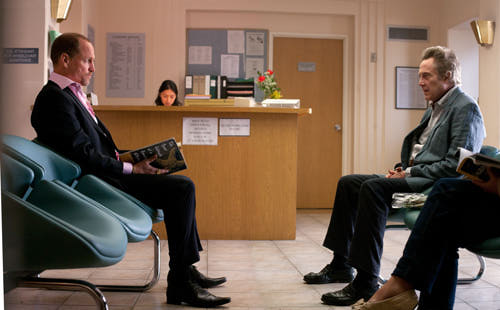 Seven Psychopaths is goofier than In Bruges but not funnier. Sometimes it seems like it wants to be a comedy, but it fits in more with Pulp Fiction with its clever and energetic dialog. Its pacing walks the line between alternative and messy, but it pushes through the faults and becomes a great double-feature pairing for something like Kiss Kiss Bang Bang.