The Fourth Doctor is well into the swing of things along with his companions Sarah Jane Smith and Harry Sullivan. Since leaving Earth in the TARDIS they’ve been working alongside the survivors of the Ark and encountered Sontarians in the process. They continue their adventures by using the Transmat beam to travel to their next location.

The Genesis of the Daleks

Whilst traveling by Transmat the Doctor finds himself transferred to an unknown location through the interference of the Time Lords. Initially the Doctor is furious as he considered his dealings the rest of his people to be over with, but he can’t help but be intrigued when they tell him where he is: Skaro, the home world of the Daleks. The Time Lords have brought The Doctor and his companions to Skaro centuries before the rise of the Daleks in an attempt to subvert their creation.

At the time of their arrival two rival humanoid factions are at war, however the Doctor notes that their unusual mix of equipment and apparel and concludes that the war must’ve been raging for generations and the two races are both facing extinction. The Thralls, a cruel and malicious race will go to any extent to save themselves. Sarah Jane, who was separated from the Doctor and Harry before they got captured, comes across the Thrall’s scientific ruler – the aged and partly cybernetic Davros. Davros has been experimenting of mutated members of the Thrall race with the intent of ensuring their survival into the future. This he achieves by putting the mutants in a robotic transport units. 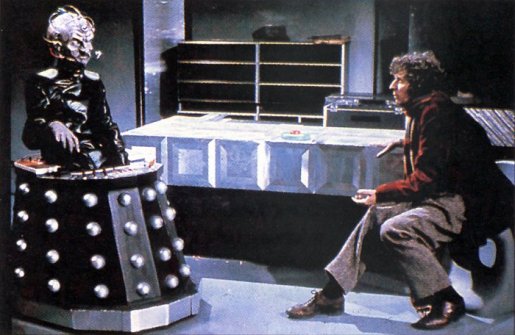 “You’re wearing that? Scarfs are so awkward looking.”

Eventually the Thrall scientific community discover that Davros is manipulating the genetics of the Thralls in order to advance the mutation of the people so that they could become Daleks sooner. This leads to a power struggle within Thrall ranks while their opponents the Kaleds rush to destroy their city. The Doctor is left facing an ethical conundrum – can he bring himself to commit genocide in order to prevent future suffering and the hands of the Daleks.

Although Doctor Who dealt with issues like this pretty frequently at the time Tom Baker sells the conundrum exceptionally well and it’s a really intense scene where the viewer really doesn’t want to see him go through with it while Sarah Jane tries to talk him into it for the sake of the future. The introduction of Davros in telling the back story of the Daleks could’ve been a plain episode that is happy to rest on the concept but it’s the best story that we’ve seen since starting the adventures of the Fourth Doctor. An unmissable set of episodes for fans.

Revenge of the Cybermen

What better way to follow up and episode about the Daleks then with an episode about the Cybermen? Although it must be noted that whilst Daleks have more or less remained the same over fifty years Cybermen have gone through multiple revisions before becoming the fear inducing menace they are today. Even at these point in the series they still look a bit silly and they’re such a minor threat to the galaxy that The Doctor give them attitude for being lame. Doesn’t mean that they can’t carry a good story though.

Following on from Genesis of the Daleks The Doctor and his companions are teleported through time and space back to the Nerva Space Station where they were expecting to be reunited with the TARDIS. They learn that they’ve arrived thousands of years in the past and must wait for the TARDIS to travel back to where they are. In the meantime they are disturbed to find that the ship is now littered with dead bodies. When making contact with the three remaining members of the crew they learn that a plague has spread through the ship and killed almost everyone on board.

The space station had been sent to explore Voga, a planet that is reputedly been made of gold. One member of the space station had visited the planet but reported nothing but ordinary rocks. What is unknown to the rest of the crew is that their surveyor has been in the pocket of the Cybermen. Using Cybernats – small, rodent like machines – they’ve been killing off the crew to use to build new Cybermen as their race is down to the last few members who are determined to destroy Voga as gold is their only weakness.

Although there’s perhaps to much going back and forth between the space station and Voga (on which we have a group of locals) that if you tune out for a short amount of time you’ll find that have the cast have all swapped places. In spite of this there’s plenty to enjoy as The Doctor matches wits with the Cybermen. The most entertaining sequences come from The Doctor giving them crap for failing in the past – plenty amusing.

At this point the story goes to Terror of the Zygons, but as that story is currently unavailable on DVD it won’t be reviewed yet. It should be noted that during that story Harry Sullivan left the TARDIS. 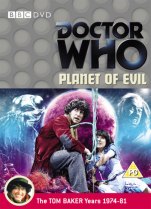 On the planet Zeta Minor an geological expedition have been getting killed off by an unseen menace. With only one member of the crew left they put out an emergency distress call that is picked up by the TARDIS. The Doctor and Sarah Jane Smith arrive to investigate at the same time as a military ship arrives and, not finding any other explanation for the deaths, put the blame on the time travelers. The Doctor discovers that the planet, located at the end of the universe, sits on the border of two dimensions. Because of this the geological team had found evidence of anti-matter which would solve the universes energy supply issues but is also the cause of their deaths.

A creature composed of anti-matter has been crossing between the dimensions and attacking the humans, and has no intention of allowing them to leave. With the military ship and TARDIS caught in a tractor beam The Doctor makes a deal with the creature, who’ll allow them to leave if all the harvested anti-matter is returned. Things become complicated when the anti-matter causes the final member pf the geological team to mutant and attack members of the military vessel.

The anti-matter dimension is a good idea, tapping into some oft-overlooked sci-fi concepts. Unfortunately this serial doesn’t capitalise on the on the idea as well as it could have, leading to a pretty muddled together third act. Not among the best stories the Doctor has to offer.