Is Pirates of the Caribbean just Star Wars?

Two of the flagship “adventure” trilogies in Hollywood are together in Disney after the recent purchasing of Lucasfilm LTD. by the Mouse for an insurmountable sum of money…. which got me thinking about them side by side.  While no, Pirates of the Caribbean can’t match the awesome power of Star Wars (what can really?) side by side but both are swashbuckling tales of adventure on the seven seas, err- or lightsaber battling tales of adventure in the furthest reaches of space.  You see? I think the original Star Wars trilogy and the Pirates of the Caribbean trilogy have a lot more in common than what would appear on the surface, which makes me think that Pirates is a modern day homage to the legendary trilogy of the past.  There are some striking character traits from the Pirates role players that bare a keen resemblance to those from Star Wars.  Should we start by comparing the characters?

Will Turner is Luke Skywalker

Both are the main protagonists presented to the audience as the character with the most familiarity and stability to guide us through a mysterious universe. With Luke we have the farm boy we can relate to in a wild landscape of aliens and empires and with Will we have the blacksmith who helps us grasp a world with pirates and undead zombified crew members. They’re both poor, disrespected and overlooked young souls without their parents as they’re stuck longing for a better, more adventurous life. Both wind up proving themselves at the end of the story and blindly jump into extraordinary circumstances for their crush on the lead female.

Both are the lovable rogues that steal the movie and are the franchise centerpieces when it comes to the main characters.  If you think about it Jack Sparrow wasn’t as much of a main character in the first Pirates movie since the story focused on Will, Elizabeth, and the medallion she happened to have in her possession.  Sparrow is more of a “means to an end” who hooks them up with a ship and guides them through a bunch of no-win scenarios, much like Han Solo.  Han doesn’t make his first appearance until a half an hour into the movie and follows a similar pattern to what Sparrow accomplishes throughout the rest of the film.  Both assist our protagonists and show their true colors in the end of the first movie after starting off feature in a rather gray area, often looking out for only themselves.

Both are presented in “the damsels in distress” role that are never really in distress and can easily hold their own in a fight.  Both are feisty, intelligent, independent women that put the stereotypes to rest and rally through the series to lead a full-scale rebel attack in the grand finale.  Both find themselves in a bit of a love triangle throughout the course of the trilogy that never really strays away from who we know they’ll end up with in the end… and both are easy to fall in love with.

Our lovable rogue’s sidekick who doesn’t stand out much from the background in the grand scheme of things or have too many lines to deliver; but they’re both fiercely loyal, dependable co-pilots…. and they’re hairy as all hell.

These two are the often times comedic side characters of the trilogy that are always seen together and always known as being the pair that is borderline inseparable.  You rarely see one without the other and they’re remembered as being the “light-hearted comedy” of the adventure.

Both are the cunning, bad-ass villains of the series with a distinct aesthetic appeal and a relentlessness about them that is almost unsettling. Both characters have tragic stories by starting off as do-gooders before they were forced to the “dark side” by the loss of their wives through a painful transition.  Both redeem themselves at the end of the trilogy or at least distance themselves from the corruptible evil you always associated them with (though Vader much more than Jones).

Our initial impression of both of these characters are “bad guys” that sold out our heroes and rub us the wrong way, even though Lando was much more milder to that description than Barbossa was.  They’re the smugglers that eventually join our group of heroes to rescue our “Han Solo” from the clutches of another power (Jabba the Hutt and The Land of the Dead). They’re mainly comparable because they have a storied history with the lead rogue and both have taken their famed ships from one another over time.

and speaking of those famed ships…

The Black Pearl is The Millennium Falcon

One is an iconic ship with an iconic name and the other is a cool-looking ship with a memorable name but both are the choice of travel for our heroes in each respective series,.  Both are also known as “the fastest ship” in their movie’s universe and both have a history of changing ownership. 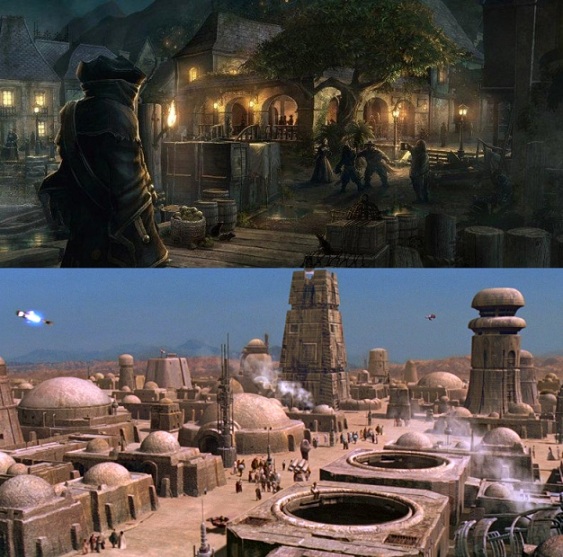 Both places are “ports” of their movie universes known for the unexpected danger that lurks around every corner and consisting of a heavy “scoundrel” overload with very little military resistance.  Both are home to a memorable bar that serves as the meeting place where our heroes get their ship and crew to assist them throughout the journey in the first feature.

When you compare both of these trilogies side by side it becomes a little more apparent (to myself at least) that the creators of the Pirates of the Caribbean franchise found a lot of inspiration in the Star Wars trilogy and used that for guidance.  Some are dead on and some have fleeting resemblances from one another but at the end of the day we’ll notice that there are a lot more Star Wars references in revered movies than one might notice.

20 thoughts on “Is Pirates of the Caribbean just Star Wars?”