The Coolest Pirates of Film

To say Hollywood has shaped our view on pirates is a bit of an understatement. Legends of the sea like; Henry Morgan, Jean Lafitte, and Grace O’Malley would probably be disappointed to see the fearsome reputation they created for their profession has changed so much. Nowadays who would not give up everything to set sail with a crew of rowdy adventurous scallywags wherever the wind may take them? In honor of the way film has completely created the idea of the pirate in pop culture let us take a look at the coolest movie pirates ever.

Captain Jack Sparrow (Pirate of the Caribbean): Let’s start this list off with an obvious one, the character of Captain Jack Sparrow turned a movie based on a theme park ride into one of the biggest blockbuster franchises in movie history. This is due almost entirely to the performance of Johnny Depp as the worst pirate we’v ever heard of (but we have heard of him). Far removed the the grizzled sea dogs who previous graced the silver screen, Sparrow was a crafty and strange antihero with a roguish charm. Say what you will about the sequels which diminished his reputation, Captain Jack Sparrow stands as the most popular pirate of this generation. 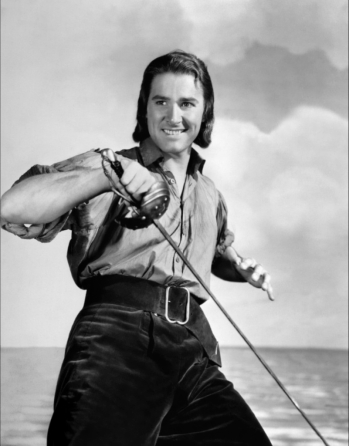 Captain Blood (Captain Blood): Portrayed by the swashbucklingest actor of all time, Errol Flynn in the role that made him one of the biggest stars in Hollywood history.  A former doctor turned escaped slave with a chip on his shoulder, leads a group of rebels and sets sail to the life of a pirate. Despite existing on the fringe of society, Blood finds himself drawn into an international conflict and forced to side with Britain against France in a battle over the Caribbean. Captain Blood was the perfect showcase for Flynn who showcased an incredible amount of charisma and charm in the part.  The film is so highly regarded that it was eventually included on the prestigious National Film Registry.

Dread Pirate Roberts (the Princess Bride): Despite not making much of a blip upon its original release, the Princess Bride has become one of the most beloved pictures of all time. Rob Reiner’s masterpiece is somehow able to present everything there is to love about moviedom; romance, a fearsome giants, white horses, adventure, and of course a dashing pirate. Giving a performance that was reminiscent of the leading men from the Golden Age of Hollywood Carey Elwes gave audiences a pirate who was filled with bravado yet also had very human weaknesses. Rather than plunder and steal, the Dread Pirate Roberts was content to go on a harrowing quest in the name of true love.

Captain Hook (Peter Pan): Before Captain Sparrow set sail, this one handed pirate captain was Disney’s most famous buccaneer. Captain Hook was the scourge of Neverland, constantly battling his carefree nemesis in Peter Pan and avoiding a particularly nasty crocodile. Many adaptations of J.M. Barrie’s have been made over the years but it is the 1953 animated film from Disney that stands the test of time to become a true cinematic classic. The Captain Hook presented by this film has joined the pantheon of great Disney villains who continue to terrorize fans.

Prudence “Spitfire” Stevens (Against All Flags): Students of history know, pirates were among the most egalitarian groups to ever sail the seven seas. In fact women like; Grace O’Malley, Mary Read, and Cheng I Sao are among the most revered pirates of all time. In cinema, the legendary  Maureen O’Hara continued this tradition by portraying one of the coolest pirates to ever grace the silver screen. She is every bit as tough as her co-star Errol Flynn (even tougher in my opinion) and carries herself with a great sense of nobility. Like many pirates in real life, “Spitfire” inherited her post from her father and had to fight hard to maintain it, which she did with great gusto.

Long John Silver (Treasure Island, Muppet Treasure Island): From the pages of the classic novel by Robert Louis Stevenson, to the big screen, the name Long John Silver has become synonymous piracy. The famous novel, Treasure Island,  has been adapted many times, but Disney is responsible for the two most memorable versions. First was the first live action film the House of Mouse ever produced, with Robert Newton giving audiences the definitive image of a pirate. Much of the slang and mannerisms we associate with scallywags and buccaneers are a direct result of Newton’s performance in this film, the first of many pirates he played. For many reading this article it was none other than the great Tim Curry whom is associated with this role thanks to the beloved Muppet Treasure Island. Curry has built a career on memorable and over-the-top characters so the role of one of the most infamous pirates in fiction was one he relished and turned in a towering performance.

3 thoughts on “The Coolest Pirates of Film”