Recently I was fortunate enough to be a part of a conversation concerning horror films and their fans. One of the ideas that was brought forth was that many horror fans got their start as children watching classic Disney films.  While these were films that everyone in their age group watched, the elements of those movies these horror fans latched onto were the scary moments. Despite their reputation for joyful films featuring princesses longing for something more from life and clean cut heroes, these films tend to have a dark side to them that many ignore. In honor of those movies, here are my picks for the Ten Scariest Moments in Disney Films (in no particular order).

1. Children becoming donkeys, Pinocchio: Right off the bat, this is a moment that made me personally wear out the fast forward button on the VCR. In his quest to become a real boy, Pinocchio ventures to Pleasure Island with his pal, Lampwick. In this anarchist paradise, young boys take part in all manner of vices, which would cause Disney suits to shudder if they had to include them in one of their films nowadays. But as the boys act like jackasses, they begin a horrifying transformation and become ACTUAL jackasses. From there the Coachman and his creepy black clad henchmen sell the donkey-children to circuses and mines. The entire Pleasure Island goes from playing on the pure discomfort of the situation, to downright tragic and chilling in the end.

2. The Headless Horseman, The Adventures of Ichabod and Mr. Toad: The House of Mouse has proven time and again that when it comes to brilliant interpretations of classic fairy tales, they excel in capturing what makes the source material so beloved, while adding the right dose of dramatic flair. And in this adaptation of the Legend of Sleepy Hollow, the animators and creative team at the studio provide one of the best takes on this tale ever done. As everyone is familiar with the story, the audience can only wait anxiously as poor Ichabod Crane journeys through the dark forest, allowing tension to build. Once his iconic nemesis shows up, the audience is already tense from the build-up, which allows the Horseman’s dramatic entrance to have the desired impact. From the terrifying laugh to the lavish visuals, the Headless Horsemen proves to be one of Disney’s scariest villains.

3. Bambi’s mother shot, Bambi: If I had a dime for every person I met traumatized by this scene as a kid, I would be able to put Bruce Wayne to shame.  The bright and green forest of the film becomes a drab place shrouded in fog and snow where the trees are withered and leafless, and Bambi’s mother realizes they are in trouble.  She urges her son to flee. He follows her instructions as gunshots ring out.  Once he believes himself safe, he realizes he is now alone. In a troubling scene the young deer searches alone through the snow until his worst fears are confirmed.

4. Cruella DeVille, 101 Dalmatians: There is a story from the set of one of the Friday the 13th films, where Kane Hodder refused to do a scene where he kicked a puppy, believing that not even Jason Voorhees was that evil.  This proves that the infamous machete wielding madman has nothing on a particular Disney icon. DeVille was not only frightening to viewers due to her willingness to skin puppies, but her motives made her that much more chilling.  She simply thought it was good business.

5. Wheelers, Return to Oz: If any studio was going to continue the adventures of L. Frank Baum’s protagonist Dorothy, Disney was going to be the perfect place. But when the company Walt built got the chance to give their interpretation of the classic tale, they gave fans a product much darker than they were expecting. From rock monsters to severed heads, the film that begins with Dorothy on the receiving end of electro-shock therapy has one element that everyone who saw it went away with,  the Wheelers. Because enough people are not terrified of clowns, they saw fit to put wheels on them. Gone were the Munchkins, the Scarecrow, and the Emerald City and in there place was a nightmarish landscape which surely scarred some children for life.

6. The Horned King, The Black Cauldron: Disney has a whole host of animated films which are considered classics.  Then there is this underrated gem beloved by a devoted cult audience. In this gothic adaptation of a Welsh tale, the Horned King was a ruthless villain who would not stop unless he ruled all he surveyed. Easily the most terrifying villain in an animated Disney flick, with a look and a voice which makes Skeletor look like a little whiny child. While we are on the subject of underrated Disney flicks….

7. Hiding from Mr. Dark, Something Wicked This Way Comes: After being reprimanded by one of the greatest authors of the twentieth century for making a mockery of one of his finest works in the original cut; Disney’s adaptation of Ray Bradbury’s fantasy masterpiece is a chilling and unforgettable coming of age flick. In the most memorable scene the two protagonists, Will Halloway and Jim Nightshade, hide from the the mysterious and sinister Mr. Dark as he and the members of his carnival parade through town. The tension becomes so thick you can cut it with a knife, as the two boys huddle in a sewer while Mr. Dark interrogates Will’s father about their whereabouts. The icing on the cake is when the villain clenches his fist so tight that blood drips from his hand.

8. The Beast’s castle, Beauty and the Beast:  In what is arguably the finest animated film ever, none will ever forget the first time Belle’s father entered the dark and ornate castle of the Beast. The grandiose yet empty structure is the an unwelcoming place for the poor man to find refuge and the fact that he is constantly under watch makes it that much more ominous. When the Beast finally makes his appearance, he is nothing short of intimidating and fearsome. Over the course of the film the audience watches as the castle, much like it’s master, evolves and brightens as Belle wins the Beast’s heart. Haunting yet beautiful, the audience’s introduction to this set piece will stay with them.

9. The apple, Snow White: Everyone familiar with the story of Snow White knows about her ill-fated munching on a piece of fruit, The haggard appearance that the evil queen takes to trick Snow White is so horrific, that it has become one of the most recognizable looks in film history. And let’s not forget the acid trip sequence the heroine goes through upon eating the forbidden fruit (though why one would accept food from someone as frightening as she did remains a mystery). This scene is further immortalized by the theme park ride it inspired, Snow White’s Scary Adventures which capitalizes on this memorable moment. 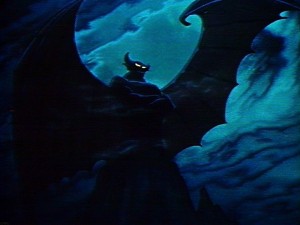 10. Night on Bald Mountain, Fantasia: Disney’s animated projects have always excelled at two things; beautiful visuals and memorable music. One of the finest examples of this is Fantasia. In a sequence set to Modest Mussorgky’s Night on Bald Mountain, viewers are treated to the sight of a large and imposing gargoyle-esque demon, Chernabog, who cloaks himself in shadows and summons the souls of the dead. In the crescendo of the segment, the demon watches as a host of evil creatures dance around for his own sadistic pleasure.The combination of mind blowingly beautiful animation and music stands as one of the finest pieces of work to ever emerge from the House of Mouse.