Top 10 Depictions of the Devil

Apparently, the first Last Exorcism wasn’t really the last afterall. The Last Exorcism Part II is debuting on March 1st, so here are 10 other depictions of the one of the baddest bad guys around, The Devil. There may be spoilers. Ye be warned!

Everett (George Clooney) and his fugitive buddies take to the open road in search of buried treasure in this adventure tale from the Coen brothers. Along the way, they meet pieces right out of Americana including Tommy Johnson, based on real life blues man Robert Johnson, a musician so good it was said he sold his soul for his ability. Truth was he was just a talented black guy in a racist time, but the Coens wanted the fable. Tommy confesses to selling his soul. When Pete (Tim Blake Nelson) asks what the devil looks like, Everett, who fancies himself intelligent, interrupts ” the great Satan hisself is red and scaly with a bifurcated tail, and he carries a hay fork.” But Tommy says different. “Oh, no. No, sir. He’s white, as white as you folks, with empty eyes and a big hollow voice. He likes to travel around with a mean old hound. That’s right.” Sounds like mean old Sheriff Cooley the boys ran into before meeting Tommy.

Before people were freaking out about the Mayan prediction, they were freaking out about Y2k, the end of the world in the year 2000. Something to do with computers erasing our bank information and credit and then the Terminators rising up. I don’t really remember, or at least, I try not to. End of Days takes it in a different direction. They go bibical: Revelation 20:7: “And when the thousand years are ended, Satan shall be loosed out of his prison.” This is interpreted as every thousand years, Satan is let loose to possess a human (played by a slick and creepy Gabriel Byrne) and knock up a woman. This will begin the Christian doomsday. With New Year’s Eve steadily approaching, it is up to a depressed former cop impossibly named Jericho Cane (played by a surprisingly effective Arnold Shwarzeneggar) to protect the women until Auld Lang Syne is heard. The Wall Street banker the devil possesses is only referred to as “The Man” in the credits, which I am sure is to be creepily anonymous. It also represents The Man, that wealthy, overwhelmingly white upper crust that secretly controls every facet of our government. So suck it 99-percenters, Arnie beat ya by a decade.

The TV show, “Supernatural,” follows the exploits of Sam and Dean Winchester, brothers raised to be monster hunters by their father after their mother was killed by a demon. A lot of entertaining yet convoluted history later, the demon was actually there for baby Sam to prepare him for his role in the coming Apocalypse. See, in “Supernatural,” angels can possess people just like demons can, but their are rules. Angels have to ask their host for permission, and each angel has a specific meat-suit that can actually hold their power for an extended period of time. Sam is Lucifer’s; Dean is Michael the Arcangel’s. These 2 are supposed to get touched by an angel and duke it out for the fate of the world. Sam denies Lucifer access, obviously, so Lucifer finds a weaker meat-suit (played by Mark Pellegrino). Pellegrino has a Tommy DeVito thing going on. He’s really funny until you piss him off.  Pellegrino eventually gets to reprise the role when Sam has a psychological break and starts imagining Lucifer tempting him, like his own little devil on his shoulder.

The Lord of Darkness

How could I not include this mother fucker. I mean, look at him. He is fierce. And he is played by Tim Curry, one of the creepiest bad-guy actors of all time.  With Legend, director Ridley Scott tries to make an old-fashioned gritty fairytale before Disney went and pussified them all. It tells the tale of a mythic world full of goblins and fairies and what-not. The Lord of Darkness wants to kill 2 unicorns so that he plunge this land into complete darkness. I know it sounds really REALLY silly, but this movie has found some serious cult success. Roger Ebert once said (and I paraphrase because I don’t feel like finding the actual quote) that the make-up does all the actor. I feel like just knowing Tim Curry makes that seem false. They could have gotten rid of all that junk and Curry still would have given as creepy and scary a performance. 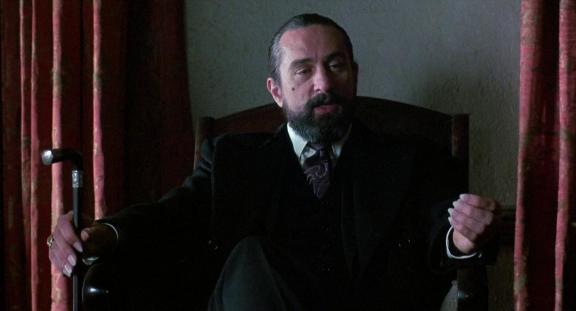 Harry Angel (played by a pre-face lift Mickey Rourke) is a private investigator living in New York City in 1955. As you would expect, he is unshaven, unkempt, and probably hungover. He is instructed by a lawyer to meet a new client, Louis Cyphre (played by Robert DeNiro). Cyphre has lost track of his own client, and he needs Harry’s skills of detection. The clues lead Harry to the voodoo practitioners of New Orleans, and he leaves a trail of corpses as each person who gives him information seems to die soon after. While on the case, Harry becomes more and more psychologically tortured until he realizes he has led the devil himself to someone who sold their soul a long time ago. Louis Cyphre may be the worst damn pun ever, but DeNiro plays him like a mafia kingpin. He has a long beard and long druggie fingernails yet he also has some pretty dapper threads and a cane. All hes missing is the monocle.

Dr. Parnassus is a travelling magician capable of showing people their wildest imaginations. A long time ago, he was a member of a brotherhood of monks who believed they sustained the world by constantly telling stories. One day, they are visited by the grifter, Mr. Nick (played by the gravel voiced Tom Waits), who seals all their mouths and proves to them that the world exists with or without them. Parnassus believes there are others telling stories. So he and Mr. Nick make a wager. He who can collect the most souls through either Parnassus’ stories of virtue or Mr. Nick’s promises of pleasure and vice wings. Parnassus wins, but Nick plays to Parnassus’ gambling addiction to continue their competition. It is not hard to see how Mr. Nick should have red horns, long tail, and pitch fork. He is a hipster tempter! 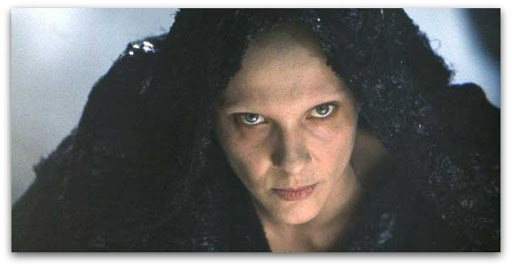 4. Satan – Passion of the Christ

Did you know that Passion is a Christian theological term that means the suffering of Jesus before his death? That’s an easy one. Did you know that satan was originaly a title for a tormentor of God who were sent out to tempt humanity and test their devotion to the Lord? It’s true (at least, that’s what wikipedia tells me). It seems that the New Testament the term became synonymous with The Devil. Here, Satan takes the form of twisted mirror image of Mary, even carrying around a twisted baby in mockery. She slithers in and out of Jesus’ long walk to the crucification site constantly reminding him that their is way out of all of this other than death.

The First War of the Angels was when Lucifer challenged God’s throne. He was eventually cast out of Heaven, but he got to reign in Hell as a parting gift. Meanwhile, their was a Second War of Angels. This time a group of angels fought against God for elevating humanity as his greatest creation over all other things, including angels. One of those angels is Gabriel (played by Christopher Walken) who has taken to Earth to find the most violent human soul to help them fight against God’s forces. A school teacher and a cop who was once going to be a priest at one point until he started having terrible visions stand in his way. If Gabriel wins, Heaven will basically become another Hell, and Lucifer can’t have that. Viggo Mortensen plays Lucifer, and he is down right nasty. He gets some really disturbing Poe-like brilliance to speak including the line, “I can lay you out and fill your mouth with your mother’s feces, or we can talk. “

Lucifer scaring the pis out of Constantine

There is a lot of justified hate toward the movie Constantine. They took a blonde British sarcastic son of a bitch of a supernatural detective and turned him into a dark haired American mopey douchebag of a supernatural detective (played by Keanu Reeves). A fan favorite character is literally stripped of all his distinguishing features, but I love a movie that plays with Christian mythology so this one has become a guilty pleasure. As the story goes, Constantine could see beyond the veil, seeing all the angels and demons hiding out on Earth. And they knew he could see them. Constantine thought he was going crazy so he tried to kill himself. He failed, but now his soul is tainted by a mortal sin. Constantine is essentially trying to buy his way into Heaven by locking up as many evil forces in Hell as he can. They refer to him as “the only soul Lucifer would come to Earth himself to retrieve.” And he did. He is played by Peter Stormare, one of those guy behind the guys kind of guy. You’ll probably remember him as the Russian cosmonaut in Armaggeddon, ironically enough. He has a white suit, a sickly drunkard face, and is so hot he has tar literally dripping from his feet. When he comes face to face with Constantine, it is one of the best moments in the whole damn movie.

The Devil pulls all the strings

“Reaper” was one of those TV shows that was cancelled oh so….so, so, so early than it should have. It featured a 21 year old slacker, Sam, who was coddled by his parents because they knew on his 21st birthday that the Devil was coming for him. His father was sick, and they made a deal with the Devil to save his life. They put up their first born child and figured, “Forget it, we won’t have children.” As Dr. Ian Malcom would say, “Life found a way.” Now, Sam, with the help of his dummy buddies, has to be a reaper, one of the Devil’s bounty hunters. He captures escaped souls and send them back to hell through some kind of ironic vessel. The Devil this time around is played by “Twin Peaks” cast member, Ray Wise. He is one part game show host, one part cutthroat business man with a tan and megawatt smile to make George Hamilton jealous. C’mon, he looks so trusting.

12 thoughts on “Top 10 Depictions of the Devil”