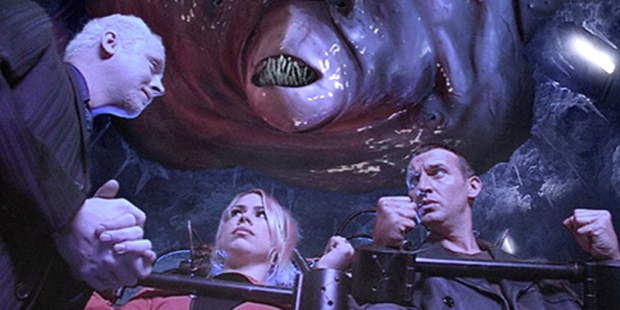 The Doctor, along with Rose and Adam, arrive on an orbital space station in the year 200,000. The human race is decidedly blue collar, living of fast food and hanging off the television for information despite the Doctor claiming that this should be the pinnacle of human civilisation. Investigation reveals that the space station is actually a satellite that is broadcasting the 24 hour news channels, the information for which is filtered through the brains of the ‘reporters’ whose neural implants allow them to process the data through their minds.

Not a bad episode, but certainly not one that makes the most of the themes. Media control is always a good topic but in this instance it feels as though it’s only a passing mention. There’s a couple of good sub-plots and guest stars but the narrative never quite find its pace. Simon Pegg works as the TV producer but the character doesn’t have any context worth mentioning and the performance doesn’t suit the part (and as a long time Pegg fan that’s a tough thing to say). Tamsin Greig fares better even if it’s only a small role.

Adam gets the most interesting sub-plot. Having been vouched for Rose she leaves him to his own devices while Rose and The Doctor are cracking the mystery. Whilst most companions board the TARDIS out of a sense of adventure Adam was brought along and gets tempted by the opportunity to improve his own fortunes in the present by stealing technology from the future. It’s a great question for the show to tackle and makes for one of the best parts of the episode.

After the rather shallow look at media control in The Long Game we move straight in to much heavier territory. Rose talks to the Doctor about something very personal to her – the death of her father. Having been told by her mother that her father died alone after being hit by a car Rose wants to travel back in time to be with him when he dies. The emotion hits hard and fast when Rose is unable to bring herself to watch. Guilt ridden over the missed opportunity Rose, against the Doctor’s advice, goes back again, but this time rushes out a saves her father.

There is plenty of great material in this episode. Rose goes through a personal crisis when she finds that her father is not the man that her mother made him out to be. Not only that, she finds that their marriage was all but on the rocks due to her father’s infidelity and it’s unlikely that if he had lived they’d still be a family. On a less personal note the rip in the space-time continuum that is created by Rose unleashes a flock of inter-dimensional demons that are devouring everything in their path.

Holed up in a church with wedding guests and Rose’s parents (not to mention a baby Rose) they come under siege from the monsters. The Doctor, however, is furious as the problems that Rose’s rash actions have created and eventually storms out. Seeing the Doctor abandon those in trouble and a companion outside of their timeline is a surprising turn and carries a strong impact. Although it’s an episode with a strong emotional pull the plotting gets a bit wonky part-way through, and the dues-ex machina used to resolve the episode is a stretch. The Reapers who are attacking the characters are pretty shoddy looking and take away from the horror element the episode needed.

It’s a great story and a fantastic theme for Doctor Who to tackle and although the monsters themselves are not an part with the story it stands out as one of the best and most interesting adventures for the Ninth Doctor. 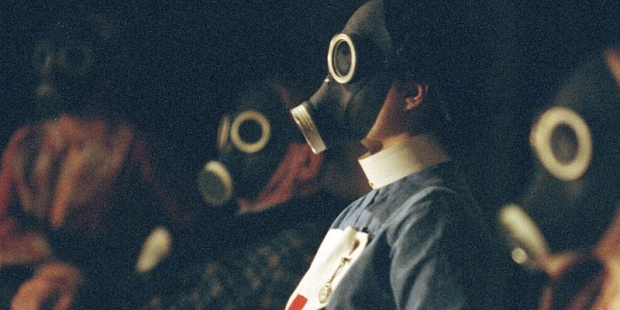 Whilst traveling through space and time the TARDIS locks on to a metal cylinder that is marked as ‘dangerous’ and give chase. They eventually land in London during the WWII blitz and the Doctor goes to investigate. Rose spots a child on a rooftop and goes to see what’s wrong with him when she finds herself hanging from the bottom of a barrage balloon (because of course). She gets rescued by a British Captain named Jack Harkness who reveals himself to be a freelance time agent looking to sell the cylinder he ‘found’. Whilst this is going on The Doctor has allied himself with a street urchin named Nancy who is pretty savvy about surviving during the attacks.

Everything comes to together when they encounter a creepy young boy wearing a gasmask who continually asks if they are his ‘mummy’. This strange child has the unusual ability to remotely control any form of technology, including typewriters and even the phone in the side of the TARDIS (which isn’t a real phone). As the trio of the Doctor, Rose and Capt. Jack make their way to the hospital near where Jack’s cylinder crashed to Earth they find that the patients within all wear the same gas-mask – except they’re not wearing it, it’s made of flesh. Somehow they’ve been affected by a contagion that transforms them all into a mindless, gas-mask clad zombie.

Certainly a fondly remembered episode, in part because of the creepiness. Although on paper a zombie looking for his mummy sounds silly (and it sometimes does in the show) the writers come up with dozens of fantastic scenarios. From one character suddenly sprouting the gas-mask from their mouth the number of times the characters are caught of guard by technology behaving oddly never ceases to be nerve wracking. 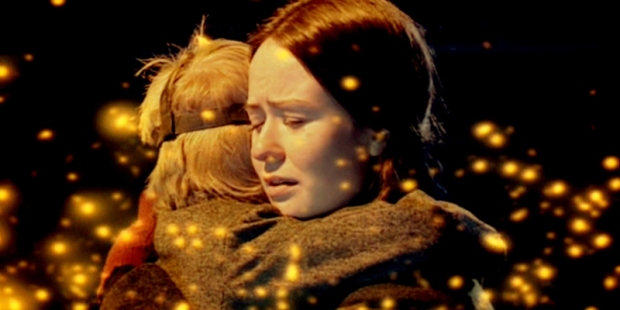 The introduction of Capt. Jack Harkness is another reason why this is a popular episode. The smooth talking inter-dimensional pansexual buccaneer quickly endeared himself to fans and eventually headed up his own spin-off. He’s on great form during his introductory episode, trying to play The Doctor but finding that he’s met his match in the Timelord. The banter between the three characters as their struggle to find their way out of the hospital is pure brilliance.

After the two-part story we get a very satisfying conclusion. After putting the human race in peril Capt. Jack does redeem himself with a classy self-sacrifice and there is a very upbeat sign off. All round a fantastic episode.