The 1980’s was a time most remembered for its excess; Carter’s malaise had been trumped by 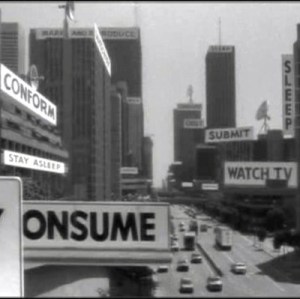 Reaganomics and a sense of optimism was rampant. Under the right leaning policies of Ronald Reagan and Margaret Thatcher, businesses and investors saw the regulations that once constrained them fall as their wallets got heavier. Pop culture reflected the changes in society as movies and music became more grandiose and theatrical. But this glamorous era had a dark side few realized; the Cold War heated up as tensions rose between the Soviet Union and the United States; and the economic policies and military spending were no doubtedly leading to some kind of economic downfall on the horizon. But few people talked about such things; but one man during the Era of Excess came out and made a film about the problems he saw with society, John Carpenter. The horror icon took a very tongue-in-cheek look at the world around him in his 1988 cult classic, They Live.

The premise was absurd and brilliant at the same time, a drifter known as, Nada, discovers a pair of sunglasses which allows him see that the wealthy and powerful in American culture are actually part of an  extraterrestrial invasion. Forgoing the usual flying saucers and AT-AT Walkers, the alien invasion seeks to control the human race via subliminal messages on billboards, in magazines, and on television; these messages encourage people to live tranquil and boring lives. Nada uses this newfound information to join a rebellion to overthrow the alien overlords.

The most brilliant aspect of They Live was the casting of its main character. Rather than choosing an established actor, Carpenter knew he needed someone special who could sell the camp value of the picture and still be edgy and rebellious. He cast one of the biggest counter culture icons of the decade, the Hot Rod himself, Rowdy Roddy Piper. On every week television women and children cheered as the clean cut, Hulk Hogan, encouraged fans to; say their prayers and eat their vitamins; and undermining them and their hero was Piper, the kilt wearing loudmouth who thrived on bucking the status quo. Piper had the charisma and talent to make Nada one of the most beloved heroes in genre filmdom. John Carpenter recognized the Hot Rod’s talent as a wordsmith and allowed him to come up with most of his own dialogue, which was full of memorable insults and put downs such as the iconic; “I have come here to chew bubblegum and kick ass….and I’m all out of bubblegum”. To make up for Piper’s inexperience in acting the gifted character actor (and awesome voice possessor) Keith David was cast as Nada’s buddy Frank.

With its strange balance of science fiction and humor, They Live has attained the status of being a cult classic. Despite being a product of its time, the film still resonates with viewers as it reflects the modern society as much as it did Reagan’s America. Aside from social commentary, John Carpenter is at the top of his game as a filmmaker in this flick. After building a reputation on dark and dreary horror flicks the ability to shift gears and make a fun science fiction film shows the great versatility he has as an artist. if you have not watched this movie lately I highly recommend you turn it on right now.