G.I. Joe: The Rise of Cobra was one of those movies that did pretty much everything wrong. The story was dumb, the acting was dumb, they gave Cobra Commander a backstory he didn’t need and it was a dumb one. This was a shame because like Transformers and Teenage Mutant Ninja Turtles, I was a big fan of GI Joe back when I was a youngling. A mate of mine had the Joes and I had the Cobra figures and we’d battle them in our back yards. You can imagine then how disappointing Rise of Cobra was. How someone can take something as cool as multitalented action soldiers and make it a boring waste of time, is beyond me.

So it was a big surprise to me that a sequel was made, given how everybody rightly hated the first film. What was more of a surprise was that GI Joe: Retaliation was actually really bloody good.

The plot is… okay it’s dumb as hell, but I’ll sum it up anyway in the following paragraphs.

After taking on the identity of the US President at the end of the first film (there is a nice glossing over of events from Rise of Cobra so you don’t ever have to actually watch it), Zartan has been filling the Secret Service with Cobra agents who all wear handy little Cobra pins on their lapels because nobody would certainly ever notice that, not at all. All this is to find the secret prison where the authorities are keeping Destro (the metal faced man played by Chris Eccleston in the first movie and nobody in this one) and Cobra Commander, played by Joseph Gordon-Levitt in the first movie for no goddamn reason. Thankfully this time round, he’s a lot more like the character from the cartoons and toys.

So one thing leads improbably to a series of other things, the Joes are betrayed by their not-really-the-President and only a handful remain. It’s up to them to take revenge. Because of course it is. 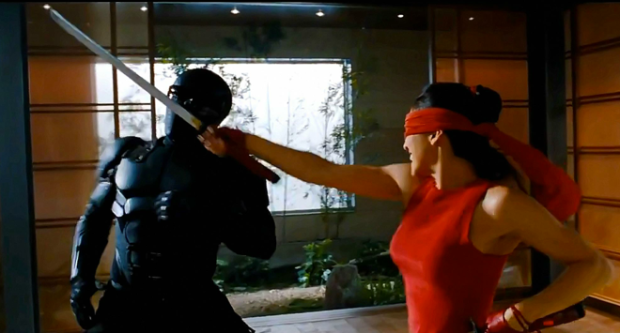 Meanwhile Snake Eyes is doing awesome ninja things in Japan. He has a convenient new sidekick Jinx, and Storm Shadow is there too. Blah blah blah, Cobra Commander wants to take over the world, and he has a plan to do it, and things get very tense for a while.

The plot doesn’t really matter. It isn’t bad or anything it’s just not what matters. What matters is that Retaliation is fun. Don’t get me wrong; this is not a good movie. There are plot holes everywhere, including a really huge one in there that I won’t spoil but which made me actually turn to my movie comrade and ask “what the crap?”, and it’s cheesy enough to be put on the Denny’s menu. But none of that spoiled my enjoyment of this movie.

Dwayne Johnson was born to be in a GI Joe film. He is the embodiment of Roadblock, Ray Park is excellent as silent, faceless assassin Snake Eyes and Bruce Willis is my hero anyway; I’d watch anything that man was in. Having Cobra Commander ditch the shitty facial prosthetics and don his shiny silver mask was also a great addition because it made him less like a terrorist and more like a supervillain, which is what this franchise needed. It needed the campy, over the top nature of the source material. It’s about a group of soldiers unironically called GI Joes for fuck’s sake; this is not a film that needs to remain grounded. 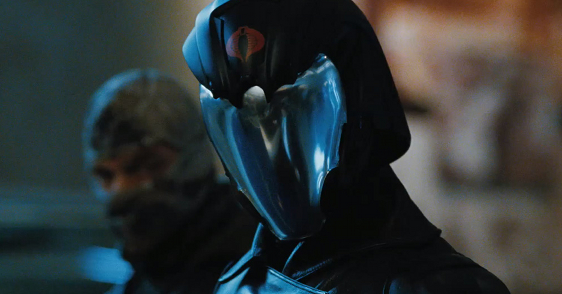 There’s some great action sequences; a fight scene between ninjas on the side of a mountain, suspended by cables; a wonderful scene between Firefly and Roadblock; another great one of Roadblock with his weird tank thing (which apparently was a real thing some guy made in Louisiana or something, and which the production staff just needed to have); some nice parkour inspired running from a few Joes; and of course many slow motion scenes of Cobra Commander walking majestically, faceless and leather-clad, coat billowing around his legs.

This is a movie where you don’t just suspend disbelief, but lock it in a lead-lined room, and then enjoy the stupid in the best way imaginable.

Look. If you’re like Funk, you won’t like this movie. He likes movies that are good movies and there is nothing at all wrong with that but if you don’t mind watching something stupid like Transformers (which I love) or Battleship (which was the stupidest, greatest two hours of my life last year) then check it out in cinemas.

I’ll be grabbing it on BluRay.