*Warning: I will try my best to be spoiler-free in this review but I’m throwing a warning up just in case.*

We open with blackness.

Female Voice: Are you afraid of God, Booker?

Booker: No. But I’m afraid of you.

Then a quote fades in from the blackness:

Many see video games as pointless. The overwhelmingly popular aspect of Call of Duty or the childish fun aspect of Mario are what is most well known and this causes many to write games off as a waste of time. Then there are those rare instances where, like a film, something different happens. There is an innovative vision, detailed characters, a captivating narrative and then it is all interwoven with a game that is fun to play. This is where a game stops being just a game and elevates to something higher: art. Games such as Half-Life 2, Shadow of the Colossus, Dark Souls and many others have all reached this height and they are now joined by Bioshock Infinite.

I think something can be said when a game produces story and characters that are more interesting, engaging and complex that most films of recent memory. The story starts simple with Investigator Booker Dewitt owing money to some very bad folks in 1912 New York. In order to pay the debt off he is ordered to the recently seceded sky city of Columbia to find a girl named Elizabeth and bring her back. Once the deed is done, the debt is paid. Bring back the girl, wipe away the debt. This is where the story begins but during the 10+ hours that Bioshock Infinite lasts, it delves much deeper and goes much further.

To begin, the story and characters are fantastic. The story starts small but then sets on a roller coaster of a ride to a conclusion that is not shocking but instead is so unique and so above anything else that you will in no way see it coming. Everyone who played the original Bioshock will absolutely be expecting a twist but no matter how much you expect something to happen, you will not be ready for what actually does. The characters of Booker and Elizabeth develop to a meticulous level as the game progresses, making them the most recognizable video game characters of recent memory. Individually they are recognizable and easy to relate to, but then together you see their connection grow and their interactions develop in a very moving human way.

There are also the small details and the artisanship of Columbia. The presentation of race discrimination, religious extremism, false patriotism, they all weave together like a beautiful quilt and create a lush and detailed world that you cannot help but get lost in. You need to take your time playing this game and make sure you read every poster and notice every detail hidden throughout as everything comes together to create a world that you love to arrive in and then feel sad as you leave it. The details truly do make this game, whether it is something grand such as the heavily anti-race society having statues in the honor of John Wilkes Booth to something small and intimate like randomly finding a guitar and when you begin to play it, Elizabeth softly sings, “Will the Circle Be Unbroken.”

At the end of the day however, this is a game and what a wonderful game it is. The controls are tight and responsive, the shooting mechanics coupled with the Vigors (special powers that were known as Plasmids in the original Bioshock) are never not fun to experience. Then throw in the use of the Skyhook as well and everything is even better. Elizabeth is almost always by your side but the game is NOT a struggle to always keep her alive. She usually stays out of the way during fights and you never need to protect her. In fact, she’s usually helping you. She is constantly running around looking for items and ammo to help you during fights and she possesses the unique ability to open “tears” and bring in various things to help as well. 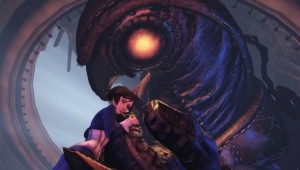 If there are any complaints whatsoever it is that after a strong beginning and a furiously paced last part, the game’s middle is kind of plodding. The middle part of the game does a lot of telling you to go here, only for you to get there and then be told “wait no actually; you need to go here first.” For such a wonderful game with such an engaging story, the middle could’ve been a tad tighter instead of feeling stuffed just to expand the length.

Despite this minor gripe, Bioshock Infinite is a work of art. A game that not only needs to be experienced, but studied. Long after the credits roll, you will still hear the Songbird whistle, you will still hear Columbia’s choir chanting. This is a game meant not just for the mind but also for the soul.