Disney Dinner and a Movie: Alice in Wonderland (1951)

Alice in Wonderland is one of my favorite Disney films. Based on Lewis Caroll’s famous novels, the movie follows Alice as she travels down the rabbit hole and through the strange world of Wonderland. This movie would be nothing without its characters. Alice meets a plethora of interesting and odd creatures during her adventures, the most famous including The Mad Hatter, The White Rabbit, The Queen of Hearts and of course, the Cheshire Cat. The movie provides for some wacky scenes with bright colors and crazy characters that will make you feel like you’re in a dream yourself. 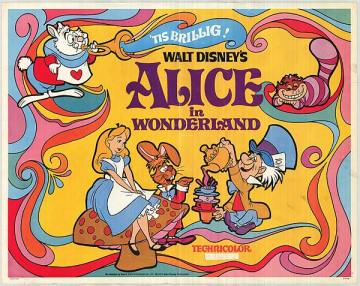 The most obvious choice of a meal for Alice in Wonderland was a tea party. I doubt I need to give any instructions for how to make tea but I’ve included photos of the finger sandwiches we made. I’ve never actually been to tea and eaten finger sandwiches so I was sort of making this up as I went along. I cut the crusts off of white bread and cut each slice in half. I cut up cucumbers and zucchini and made a spread of cream cheese mixed with garlic and other spices. Finally, I topped them with cherry tomatoes. There are a crazy amount of different types of sandwiches and tea so throwing a tea party is not only fun, but can be different every time.

I couldn’t watch Alice in Wonderland and not make something with mushrooms. For an appetizer I decide to create my own Mushroom and Sun-Dried Tomato Pastries. I made a mixture of baby portabellas (chopped with a food processor) and sun-dried tomatoes and milk (mixed in the Nutribullet). I then spread the mixture onto triangles of Pillsbury crescent roll dough, rolled them and baked them. Since I’ve never done this before and was kind of making it up as I went along I tried out a few different pastry shapes. While I admit they don’t photograph very well they tasted absolutely delicious!

Going along with the mushroom theme I decided to make a mushroom risotto for dinner. I bought a box of Trader Joe’s risotto and cooked it per the package instructions. I added onions and, of course, mushrooms. I’ve never made risotto before and although more complicated that cooking regular rice it was worth it when I took my first bite. This unfortunately didn’t photograph well either but anyone who has made or eaten risotto before knows what to expect.

For dessert I decided to try and replicate the cookies Alice so famously eats in the movie. I used a simple sugar cookie recipe and bought blue frosting from the store, as well as writing gels. As you can see from the photos I severely overestimated my ability to make pretty cookies so these came out a lot more comical than professional. Despite my artistic shortcomings I enjoyed decorating the cookies and I think it would make a great activity to do with your kids while watching the movie.

Alice in Wonderland is another one of those Disney movies that features a lot of scenes with food, making it another easy entry into the Disney Dinner and a Movie column. I used to dislike mushrooms but by experimenting with different ways to cook them I now enjoy hem as much as the caterpillar! There’s nothing more fun that having a tea party or decorating cookies while watching one of the most delightful, if not trippy, Disney films ever made. I hope you enjoyed this installment of Disney Dinner and a Movie! 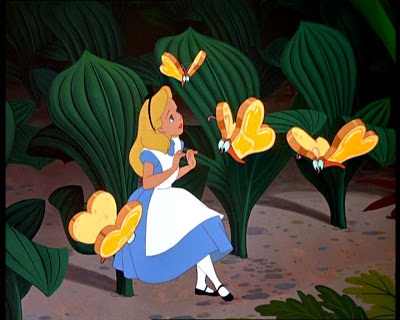