10 ‘Arrested Development’ Jokes You May Have Missed

Arrested Development is coming back. About time. Also a great excuse for us to go back to the beginning and watch the entire series from the beginning. Part of the reason it’s worth watching again (and again and again) is that you’ll catch something you didn’t see the first six times. For your next viewing here’s a couple of gags you may not have caught yet…

On the surface this seems like a rather inconsequential action – instead of walking around the dead shark Barry jumps over it. But there’s more going on here…Barry is played by none other than Henry Winkler who shot to fame as The Fonze in Happy Days (where he starred alongside Ron Howard, narrator of Arrested Development). In one particularly odd scene The Fonze jumped over a shark using skis, coining the term ‘Jumping the Shark’.

This is a planned gag that eventually got dropped from the script, but there are some lead-in jokes that did air without the eventual punchline. It would’ve been revealed at some point that Tobias was an African American…who was albino. Hence lines like “I am surprised that she went for someone so close to my own type” (in reference to Ice the Bounty Hunter) and this exchange between Lindsey and Tobias:

Lindsey: When people hear Tobias they except a big black guy.

Whenever the Bounty Hunter/Caterer Ice gets mentioned they show a shot of his yellow pages advertisement. Eagle eyed viewers may have noticed the advertisement next to it.

When Michael finds himself in hospital with appendicitis he is treated by Dr. Stien. After Dr. Stien finds that he had misdiagnosed after performing the surgery. He explains this to Michael thusly: “The operation went pretty smoothly. But once I got in there, the appendix wasn’t so inflamed. D’oh!”. If the way he said “d’oh” sounded familiar that’s because Dr. Stien is payed by Dan Castellaneta, best known as the voice of Homer Simpson. 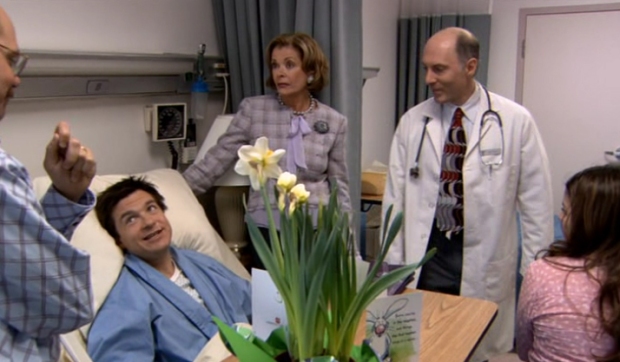 During the episode ‘The Ocean Walker’ Buster is briefly seen dancing to the Styk track ‘Mr. Roboto’ in the Stair Car, resulting in his hook getting jammed in the dashboard. Why did they chose this song? Because of this old ad featuring Tony Hale.

The banana stand gets thrown into the bay and the blame is put on college students. I quick and incidental part of an episode…on the surface. The graffiti reads “I’ll get you Bluths – Hello”.

That’s…unusual. And meaningless. Until a FULL SEASON later when Annyong’s real name is revealed to be ‘Hel-loh’. And that he wants revenge on the Bluths.

There’s a recurring sequence that plays out in the episode ‘Sad Sack’ sees various characters are walking along the sidewalk looking dejected with a distinct tune playing. What some people didn’t know is that the tune is the theme music used in the Charlie Brown cartoons. And wait…is that…a beagle sleeping on top of a red kennel? 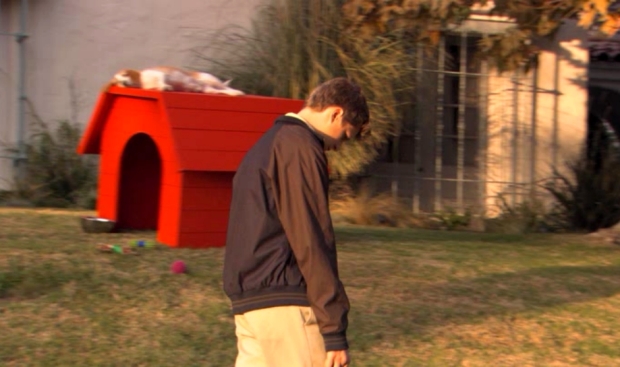 Throughout the three (soon to be four) seasons of Arrested Development various government agencies try to gather evidence against George Sr. and the Bluths in order to prove that he was involved in treason. Throughout the series there are a number of vans parked around the Bluths, all with the same company name: ‘Blendin’.

There were a few instances throughout the show of major events being foreshadowed through subtle visual references. You may have spotted the ‘loose seal’ in the background accompanied by the Jaws musical sting. 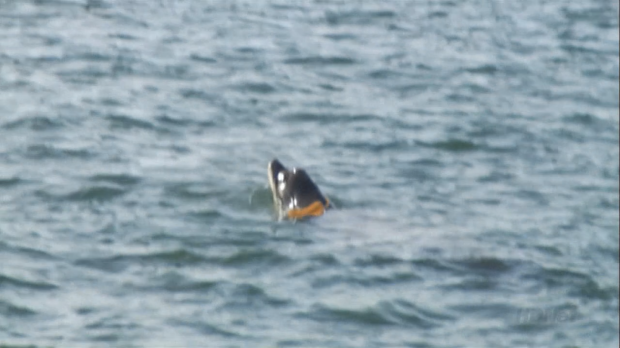 Ok, maybe that’s just a freak coincidence. Except they did it twice.

← Movie Review: The Place Beyond the Pines
Celebrity Trend: Slicked Back Hair →

3 thoughts on “10 ‘Arrested Development’ Jokes You May Have Missed”