Now that Clara’s adventures through time have been uncovered by her young wards – Angie and Artie – the Doctor decides to take them on an adventure. They set the co-ordinates for the biggest theme park in history, a globe sized park. As usual they get things mixed up and land far enough into the future that the park has long since been derelict. They meet Webley and Porridge (Warwick Davis) who are your standard issue Carnies and show the travellers their collection of historical oddities that include the empty shells of Cybermen. The planet was once heavily involved in the Cyberwar where the human race made great sacrifices to defeat the Cybermen. Of course it isn’t long before the new, smaller Cybermats (Cybermites) begin the process of resurrecting the supposedly dead foes. 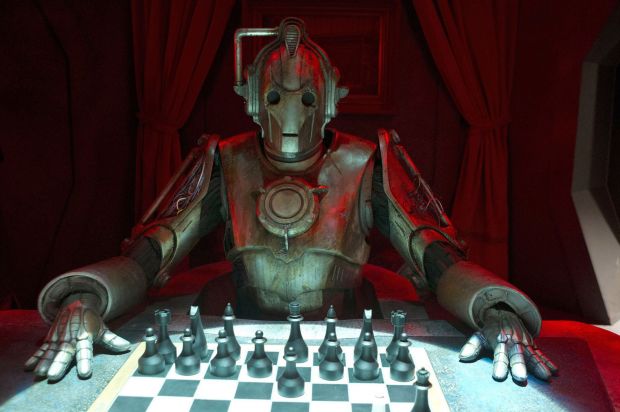 When the Cybermen take the children and begin upgrading them into Cyberplanners. Their plan takes a detour when they discover the potential of the Doctor’s brain and want him instead. Whilst Porridge, Clara and a group of useless soldiers on Punishment Patrol try and defend them from being upgraded the Doctor faces an internal struggle over his own grey matter. As the Doctor and his Cyberplanner invader duke it out over a game of chess the numbers of Cybermen increase and they upgrade new abilities. Meanwhile, Porridge is keeping a big secret of his own.

With the hype surrounding this episode – it was promised that Neil Gaiman would make the Cybermen scary again – there was certain expectations. In spite of what was said it doesn’t feel like it was ever a traditional horror episode. In invading hordes of Cybermen seem less menacing as the CGI army of them descends and they start running around and dropping their hands off to sneak up on people. At the beginning there was only the one up against a small group of survivors with limited weapons and this set up had the potential to be taken further, something like Alien with a mechanical enemy. Instead the real action takes place in the Doctor’s noggin.

Whilst Clara is on second string duty the Doctor finds himself being incorporated into the Cyber network. As the Cybermen technology was designed only for humans the Doctor has the chance to fight back. Some of the visuals are interesting in a Dave McKean manner whilst Matt Smith fully throws himself into both sides of the role. He’s clearly put quite a bit of work into the scenes where he challenges himself and it’s fun to watch.

Although the episode does feature some of Gaiman’s classic themes and settings, like the amusement park, it isn’t at the exceptionally high standard that we usually expect from him. It doesn’t push any boundaries or take the classic villains in a new direction. Entertaining, yes, but not exceptional.